Four outstanding musicians locked on to the same wavelength…

A supergroup of sorts: Michael (Stryper) Sweet, George (Dokken/Lynch Mob) Lynch, Brian (Whitesnake/Foreigner) Tichy and James (Black Label Soc/White Lion/Megadeth) Lomenzo. This could easily have been titled “When Ideologies Collide”. Well, you might have thought that, but our twin protagonists were never in the studio together during the making of this record. Like so many projects nowadays, this is a long distance tech album. At the prompting of Frontiers’ supremo Serafino Perugino, Lynch wrote and laid down the basic riffs, sent them to Sweet, who wrote and recorded a song around each one, and with his guidance, Tichy and Lomenzo then added the rhythm section.

And voila! Sweet & Lynch. Doesn’t make them bad people of course, and we shouldn’t be surprised that rock bands are using the technology available to them in an honest, economically effective way. It’s not an uncommon approach nowadays, and it’s not like they’re using samples or pitch correction. And anyway, all suspicions are soon blown away. This collaboration is a clearly a creative leap in music file technology, pelting us with a welter of superb melodic hard rock songs that bounce from pillar to post, making us think it’s the inspired, spontaneous work of a band in the studio… it’s got soul.

Throughout the album, Sweet is characteristically intense and Lynch finds that ‘in the zone’ state that he sometimes reaches, where he is relaxed and totally on fire at one and the same time. Opener ‘The Wish’ squeezes all of those qualities into 3 minutes, laying out the album’s colourful stall with an ostentatious flourish of legato phrasing and hard punching vocals. ‘Love Stays’ is uncompromisingly beautiful, a memorably melodic rock song that outdoes Tom Petty in radio ready rock, cooked up into something fierce and forever haunting. ‘Divine’, on the other hand, is a hulking, hard rock bruiser, yet both get unexpected lifts from Beatlish middle eights that owe much to the White Album.

The perceptive will have realised that what this album doesn’t include is a reinvention of the wheel. But the machine never ran so sweetly. Even adding the “Hard” to the Melodic Rock genre description really doesn’t extend the invisible boundaries much further. But maybe because of the strictures enforced by this method of collaboration, rather than in spite of, individually, Sweet and Lynch had to dig deep to find resonance in music created by the other at arm’s length.

The organic ‘Strength In Numbers’ gives a Led Zeppelin like eastern promise to shouty symphonic metal. Like Edguy with Page on lead guitar. Lynch’s swirling arpeggios sweep the funky gospel tones of ‘Rescue Me’ into Sweet’s welcoming open arms, and go a huge step further on ‘Me Without You’, a spiritual hymn to lost love.

Sweet’s singing is a force of nature that can be summoned at will. He has a voice of astonishing grain, one that can mangle vowels into whole choruses, can soar off into a stadium rock orbit, and yet it is capable of a hard, edgy tenderness. Thanks to Lynch (and Lomenzo and Tichy) this could be the best thing he has done. Not so personal as ‘Not Your Suicide’ but a step up from his superb (but criminally underrated) Truth album (2000).

Of course it’s not just about Sweet and Lynch, Brian Tichy clearly enjoys the freedom that comes with self direction, if occasionally straying into self-indulgence and James Lomenzo is the quintessential sideman. He gets the job done with little fanfare. Just listen to the driving, pugnacious bass playing on ‘Hero Zero’. It transforms a decent rock song into a chunky tour de force. Together, this is four outstanding musicians locked on to the same wavelength. You’ll do well to find a better melodic rock album this year. 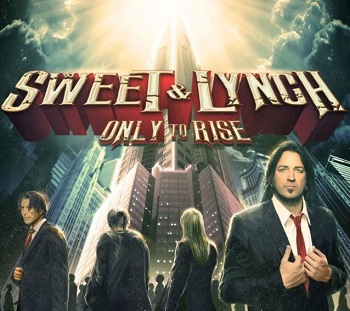