Formed in Krakow, Poland in 2020, Svar is the brainchild of one-man army Kamil Bolesta. A darkly ambient/industrial black metal project, Kamil takes the best of both genres and melds them in a colossal beast. Under A Sky Full Of Thunder is Svar’s second EP (following 2021’s Behind The Veil) and it finds Kamil further honing his craft to deliver a record which takes the genre into new territory.

For this release Kamil has drawn deep into his culture, and Under A Sky Full Of Thunder is a loose concept focusing on the Slavic god of thunder, Perun. The divinity of sky, water, fertility and oak trees, Perun is an all-encompassing, powerful entity, and such a character deserves an equally commanding sound, and that’s exactly what Svar dishes out on this EP. The opening musical avalanche, ‘Downfall’, is an Arctic blast of air that entombs the listener in a block of ice. This is an EP best experienced through headphones; the production is wide and expansive, and employs the full dynamic range. There’s an interesting dichotomy between the clean guitar lines and the scuzzy riffs, with one placed on the left, and the other on the right, and the effect is akin to being stretched on a mediaeval rack, with the sound pulling you in two directions.

The fact that Svar is a one-man project gives this EP a singular vision; everything is honed and targeted towards some infinitesimal point. The instrumentation locks in tightly, and subsequently the sound is bombastic and shatters the still like a thunderbolt cracking a Nordic sky. Kamil also plays guitar in groove metal band Void Of Sympathy, and he brings a little of that swing to this project. Therefore, each of these four tracks are strangely melodious, which makes them kind of unique in the black metal genre.

With only one of these four tracks (barely) under six minutes in length, Under A Sky Full Of Thunder tends to veer towards the epic, yet it doesn’t feel forced or unnecessarily elongated, rather the songs are left to run their natural course. Take ‘Luminous, Lethal Force’, for example. It’s a song of many suites, all interwoven and interlocking, it’s almost progressive in nature, yet it flows smoothly, as a river into an ocean. Kamil Bolesta isn’t an artist afraid to push back boundaries, or deviate from expected norms, and ‘Sanctified By The Lightning’ features some nifty traditional metal soloing mid-song. The title track is poetry without words, an instrumental that paints a vivid picture, and it swirls like a musical tempest which rages from speaker to speaker.

Whilst staying true to the original ethos of Black Metal, Svar has opened new doors, and the risks taken have really worked. Under A Sky Full Of Thunder has quickly become one of my favourite releases of 2022 (and it should be one of yours, too). 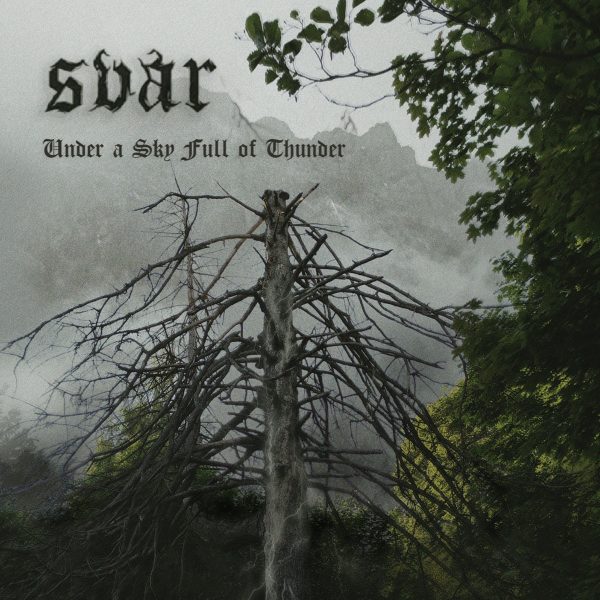