The sonic assault unleashed by Nuclear Blast Records on 15 April 2016, the beating taken by Allan “the junkie” Jones

Al Jourgensen, probably best known for his part in the ridiculously long-lived industrial outfit Ministry, has evidently decided not to aim for the charts by naming both the band and the album Surgical Meth Machine. It’s a pretty good indicator of what to expect on the album itself, even if it arguably doesn’t go quite fair enough with the mallet. But holy crap, this thing hits hard. You know those albums where you almost feel like you want to take a break part-way through because it’s a full-on aural assault, yet you can’t bear to stop listening because you’ve got a massive grin on your face? This is one of those albums.

See, unlike most industrial band members, Jourgensen has never taken himself particularly seriously. Despite the hard-hitting, almost violent guitar and drum work on the album, there’s a pervading sense of fun and bounciness. It reminds me of the good old days of Johnny Violent singing bouncy goth-industrial versions of ‘Happy Birthday’ – it’s at times very silly and bouncy at the same time as it’s still smacking you in the head with a sledgehammer of fizzy guitar and electronic percussion.

And then, just to show you that he knows exactly what he’s doing, he throws in a track called ‘Unlistenable’ half way through that basically just stutters and detunes and filters the hell out of whatever was going on in the first place. It’s completely bonkers. Somehow, though, it’s still utterly compelling, especially when he starts poking fun at fanboys with samples ripping on various bands, ending up with Jourgensen declaring of Ministry: ‘Faeces […] Good fucking riddance.’

And then the whole tone changes. Devo cover ‘Gates of Steel’ goes all Andrew W.K., and is actually pretty decent, somehow, and segues into Spudnik which keeps the slightly poppier, lighter feel on as well. ‘Just Go Home’ is old-school gabba techno with space-y samples and bleepy noises, and leads into ‘Just Keep Going’ which is more of the same, before ‘I’m Invisible’ closes us out with something that’s almost mass-market. It reminds me of the sparse jazz noir of Portishead but filtered through a King Crimson breakdown.

Being honest, it’s never going to be something that’ll appeal to the mass market – that’s just not what Jourgensen does. The fact that it’s an album in two halves means that the Ministry fans of old will probably love the first half, and those who prefer less forceful stuff will probably enjoy the latter half more. However, taken as a whole, it’s a fun, meandering sort of album with a great sense of humour about it from someone who can only really be described as an elder statesman of the scene. He’s having fun here, and that’s at least half of what makes it so entertaining. 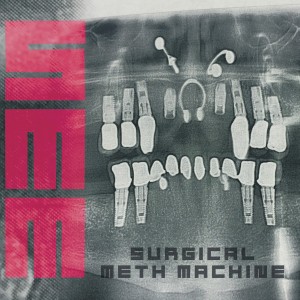