Formed in Kiev, Ukraine in 2003 Sunrise have left a tantalising trail of albums that leads to their fourth full length Equilibria. The band have produced a 13 track, foot-on-monitor, horns-held-high power metal fest that looks certain to propel this quintet into metal’s premier division.

Since their last album Sunrise have undergone a complete line up change with only vocalist Konstantin Naumenko remaining from the quartet who recorded 2016’s Absolute Clarity. This seismic shift in personal seems to have revitalised the band and things get off to the best possible start with opening track ‘Wings Of The Dreamer’. The swirling guitars that serve as an introduction spiral upwards towards some infinitesimal point before the spell is broken by drummer Alexandr Ignatenko who unleashes a thunderous drum roll. It’s a rocket propelled slice of metal that verges on thrash without losing sight of their core sound: it’s an epic brand of power metal that’s very emotive and uplifting and, should you ever be called on a quest to save the universe, you’d want ‘Wings Of The Dreamer’ as your soundtrack.

Sunrise are a band who deal in light and shade and title track ‘Equilibrium’ employs both heavy riffage and huge white spaces with each acting as a foil for the other which highlights their respective qualities and that’s just one tension of opposites that makes this track (and the whole album) such an intriguing listen. For example, the ethereal backing vocals from keyboardist Daria Naumenko flint well with Konstantin’s gruff delivery and they lock in together like the yin and yang. However, for all their invention Sunrise never lose sight of important stuff like song structure and melody and ‘Equilibria’ is an earworm that’ll crawl around your cranium for a long time. Similarly, ‘We Are The Fire’ is an amphetamine charged number that could give DragonForce a run for their money yet the chant at the songs conclusion remains catchy as hell and is sure to transfer well to the live environment.

The band know when to ease off the pedal; they’re certainly no thrash-by-night merchants and ‘Wild Swans’ is a more measured affair. Trading speed for groove it ensures Equilibria is an album that ebbs and flows as the power ballad ‘Call My Name’ follows and allows Konstantin’ to display another facet of his voice. Warmer and textured he turns in a soulful performance that’s aided by a production which adds lots of echo for a truly “late night” vibe. The relatively sedate nature of ‘Call My Name’ only serves to lull the listener into a false sense of security and ensures that ‘Unbroken Dreams’ explodes like cannon fire. It’s these uptempo numbers that Sunrise do best and ‘Unbroken Dreams’ stomps like an angry golem with guitarist Maksym Vityuk (now a full time member of Sunrise) unleashing an incendiary solo. The band have used several guitarists on this record yet the different six stringers turn in a unified performance and retain the core signature Sunrise sound.

Equilibria is a consistent album that rarely drops below the expected quality even as we reach the album’s finale. ‘The Shadow’ is a chuggy affair that’s powered forth by some nifty, chest thumping, bass work from Vladyslav Sedov while the apocalyptic-themed ‘The Bell’ ticks like the Doomsday Clock. There’s a quintessentially European feel to Sunrise’s sound that places them somewhere between Stratovarius and Sonata Arctica but the band are no mere copyists and the penultimate ‘Nightingales’ sounds like no one but Sunrise. ‘Rebel Yell’ is an atmospheric closer that pulls all of the albums various strands together. It’s almost like a progressive rock track insofar that it is comprised of several different suites, all markedly different yet pulled together into a cohesive whole and the monolithic keys at the songs tail set things up for a grandiose conclusion. 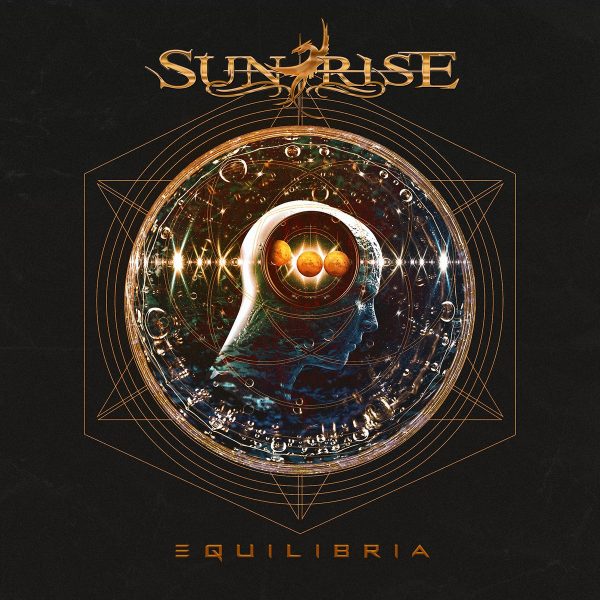