Sunnata were recently on a Euro trek with High Fighter, under the jaunty banner of ‘Get Doomed in Spring’. So we already know roughly what direction we’re heading in with this release.

The four members of Sunnata began their musical relationship in a stoner ensemble that went by the distinctly un-Polish sounding name of Satellite Beaver. When they decided to explore darker sonic soundscapes the old name was consigned to the garbage can as the search for a new name got underway.  The eventual outcome of this rebranding exercise was Sunnata and so in 2008 a new Warsaw pact was formed.

The chunky sludge manoeuvres on Sunnata’s 2014 debut album, Climbing the Colossus, earned them plenty of plaudits, although in many eyes that album almost acted like a bridge. At one end they were waving farewell to Satellite Beaver, while at the other, saying hello to Sunnata, a name that much better reflects the more subdued feeling of solitude embodied within Zorya. The name loosely translates as ‘emptiness’ and that suitably captures the hollow feeling of solitude embraced throughout Zorya.

Each of the five songs here are given time to grow and so within each 10-minute or so span, there’s space to explore different rhythms and tempos and turns. Much of it is though thumping hypnotic bass lines that take you on a near transcendental-tinged journey.

‘Beasts of Pray’ starts as a steady Eddie to get things moving. Although thinking about it, the word ‘moving’ quite possibly contravenes some kind of trades’ description act. To be more accurate, let’s just say it stomps, which of course in the land of the doomed is kind of what we’re hoping to achieve anyway.

In fact the opening four minutes of a perfunctory grainy groove is Conanesque, although without the overpowering weight the Liverpudlians carry like a badge of honour.

Gradually the crescendo builds on ‘Beasts of Pray’ and the vocals arrive in the shape of a lightly coated whisper before soaring harmonies suddenly give the opener a touch more swagger. As ‘Beasts of Pray’ eventually surges further towards the end of its 12-minute duration the whole sound implodes into a pounding fuzzed up frantic finale.

The title track opens with a pained lone cry of, ‘have you ever held you wings up high?’ before the drums kick in for an early sonic hit.  The riff that builds imperiously through ‘Zorya’ is sharper than a butcher’s knife and the dual-vocal harmonies create an impregnable energy surge.

There’s a distinct eastern flavour to the first passage of ‘Long Gone’ and once into its stride Sunnata up the aggression levels putting a bit more meat on the bones for one of the album’s darker tracks.

With ‘New Horizons,’ suffocating levels of near funereal doom start to swallow things up whole. The feeling is depressive, pounding and relentless as the whole mood darkens while the vocals have long forgotten the clean melodies so evident at the start of the album, now replaced with strained and distressed yelps

If anything the closing piece, ‘Again and Against’ is the most abstract of the five, an ambient wall of feedback which jolts into life with an exocet of a riff and by now the vocals are climbing the walls as Sunnata completely lose their senses, caught up in an avante garde avalanche of pounding grooves of dissonant doom.

Having hit the road across Poland and Germany recently, some summer Festival slots await with the hope of a more extensive Euro trek later in the year. 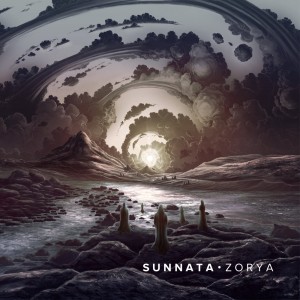