You would think that performing songs that you wrote and recorded 40 years ago would be a surreal experience. Not for Styx. Admittedly, not everything here is in that category. But the bulk of this new live album comes from the last century. Styx enjoyed a lengthy purple patch of popularity from 1977 to 1981. They released four consecutive multi-platinum albums during that period, fertile ground from which to harvest a live album’s worth of memorable music.

A Styx gig nowadays is precision engineered, from the expertly choreographed stage presentation to the spectacular video screen backing. Such is the wild enthusiasm of this Las Vegas audience, you feel sure most spent their teenage years in the seventies and/or eighties, listening to FM Radio. One way or the other, they loved this show.

It begins where all good gigs begin, in the year of the breakthrough album. In Styx’s case, 1979 and The Grand Illusion. The title track whips up an immediate crowd reaction, and when it zips neatly into ‘Too Much Time On My Hands’, they are already in the palm of Tommy Shaw’s hand, blissfully oblivious of the Crosby, Stills and Nash influences, joining in, annexing the chorus like it was a former Russian state.

As a piece, it reminds you that the key to the band’s enduring music, and indeed their untiring ability to perform it live like they mean it, was undoubtedly the sheer variety of styles they presented throughout those four albums and a dozen more. From the stripped down, hard rock of ‘Rockin The Paradise’ and ‘Blue Collar Man’ to ‘Come Sail Away’s mainstream progrock invention, and ‘Fooling Yourself’s sweet, soft rock harmonies, they all sound the same only different. And on this album, they all have the “right here, right now” quality of the best live stuff.

It may seem an obvious thing to say, but the whole band – Tommy Shaw, James Young, Lawrence Gowan, Todd Sucherman and Ricky Philips – are in awesome form. In an era where much of rock’n’roll has devolved into a digitized, flatpacked, pro-tooled, auto-tuned consumer product, it is a genuine delight to see and hear a great rock band perform a perfectly chosen repertoire, full of emotion, imagery and sharp sonic arrangements. The band’s unsung audio engineer, Terry Loizzo has again handled the sound recording and mixing. This guy is a genius. I hope they pay him well. (Note that this CD recording is also released in DVD format.) 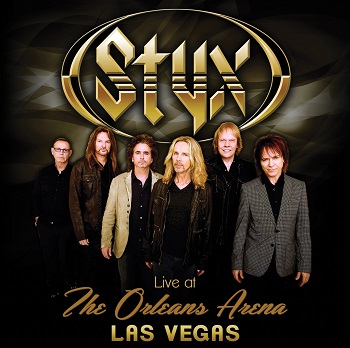