This is as straightforward as the band’s on-stage set up. Last year, rockabilly flag-flyers the Stray Cats released ’40’, a mere 26 years after their previous studio album, to mark their 40th anniversary. They then set out on a triumphant tour of Europe and the States to celebrate said album and anniversary. This is the resulting live album, produced by the band and recorded raw, as it happened on stage.

And what a thing of joy ‘Rocked This Town’ is. Clocking in at 22 songs (23 on the vinyl edition), it’s a full show, from the opening tune up to the post encore cheers. The deluxe edition also comes with coasters, stickers and a postcard. For anyone who caught them on this tour (Birmingham was a blast) it’s everything you could hope for – a perfect memento of the night and a great live album in it’s own right.

The album has a nice mix of hits, new tracks and rock ‘n roll classics. The band kick of with a track from ’40’ and what’s immediately clear is that they’re playing better than ever. All 3 are masters of their respective instruments and the crystal clear production allows you to hear all three without dulling the roar of a top-flight rockabilly band in full effect.

Track 2 is ‘Runaway Boys’ – straight into a classic that could, and has, been the cherry on the cake of many a Stray Cats gig. Even back in the 80’s the band never used studio trickery and so this all sounds note perfect, like listening to the recorded versions – but with added bite and volume.

And on it goes, the pace never dropping. ‘Double Talkin’ Baby’ is taken at psychobilly speeds, with lightning fast dexterity to Setzer’s solo’s. Here comes ‘Stray Cat Strut’, their theme tune, just as we’re still trying to catch our breath. It’s beefier and grittier than it’s studio counterpart. Cool and streetwise with great backing vocals from Slim Jim and Lee.

‘Gene & Eddie’ is up next. The band play their tribute to Cochran and Vincent, Setzer nailing all the classic fills from both legend’s greatest hits, and then casually playing a solo as memorable as anything either of them produced. Setzer then puts on his crooner hat for ‘I Won’t Stand In Your Way’ one of those songs you would swear was a 50’s standard but was actually penned by Setzer.

Setzer then calls for his purple guitar (“it goes to 11!”) for a stunning duo of instrumentals. The band tear into a fangs-bared punk surf version of ‘Pulp Fiction’ hit ‘Misirlou’. It’s head-turningly good and the gig begins to feel as though it’s really catching fire.

And then we’re off, hit after hit, all hammered out in bit size chunks of brilliance. ‘Sexy + 17’ feels timeless, it could have been written in ’58, if, that is Setzer could have travelled to and fro in time (in a DeLorean, obvs) and soaked up the influences of the guitar heroes of the 60’s and 70’s and mixed them in with his technique.

‘Blast Off’ is full-tilt psychobilly, and includes the line “So I gave Mr. Spock a pompador”…what’s not to love! Setzer then introduces the band while spinning a bit of an autobiographical rap before launching into ‘Fishnet Stockings’ – which even includes a scorching snippet of the ‘Rock Around The Clock’ solo.

Oh yeah, the rest of the band. Stunning. Lee Rockers basslines underpin everything with style while the things Slim Jim can do with just two drums boggle the mind. The band are, by now, roaring like a V8 as they hit the final stretch. ‘Rumble In Brighton’ is the perfect finish, a technicolour rock out featuring screaming flick-knife guitar and a chant-along finish.

So, there’s not much to add. It’s the Stray Cats, who gave back rockabilly to the world in the 80’s, doing what they do best. If it’s your kind of thing you’re in for a treat.

Released by Surfdog Records on 11 September 2020 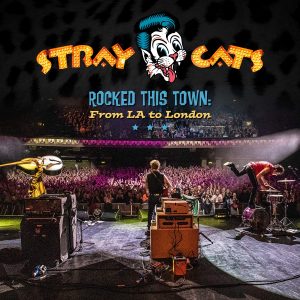 ** On LP and digital only