Stone Broken were formed in 2013 and feature Rich Moss on guitar and vocals, Chris Davis on guitar, Kieron Conroy on bass and Robyn Haycock on drums. The Walsall band released their debut EP The Crow Flies in 2014, produced by Romesh Dodangoda. (Motorhead, Bring Me The Horizon, Bullet For My Valentine). The band returned to the studio with the same producer in 2015 with the intention to record a follow up EP. The end result, with the new songs combined with the old, is a stunning debut album.

While Stone Broken hail from a region that gave us Sabbath and Priest, their sound leans more to Black Stone Cherry and Alter Bridge. So that’s big riffs, and huge choruses to die for, while on the likes of ‘Better’ and ‘This Life’, there’s inspiring and uplifting lyrics.

Some albums are growers while others grab you instantly. The latter applies to All In Time, from the very first riff of opener ‘Not Your Enemy’, one of the newly recorded songs here. Along with ‘Better’ and ‘This Life’, also here from the debut EP, in remastered form are ‘Let Me Go’, ‘Another Day’ and ‘Fall Back Down’. All fit in seamlessly with the new songs.

As much as this album rocks, there are mellow moments. With ‘Wait For You’ Stone Broken have a huge ballad, stirring and with vocals full of emotion. Listening to this song, it’s not difficult to imagine a packed arena with lighters aloft.

Having the first single ‘Stay All Night’ as the final track ensures the album doesn’t tail off as can be the case sometimes. In truth though, there’s plenty here that could be singles. With one of the earliest releases this year, Stone Broken have set the bar high. 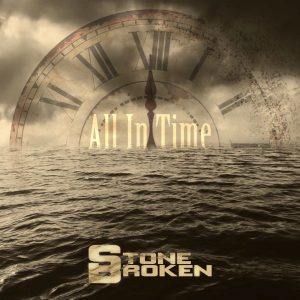