After a triumphant UK tour in the Spring, including an awe-inspiring gig at the Civic in Wolverhampton, these dates came at the end of a European tour and were designed as something special to bring this phase of his career to a close. We were promised two different setlists, special guests and a new show, and it’s no surprise that there were visitors from all over Europe and even the US and Australia for the event. Also since the Spring tour, there have been a couple of alterations to the touring band. Guitarist Guthrie Govan and drummer Marco Minneman have left to tour the States with the Aristocrats, and replaced, respectively by Dave Kilminster, taking a break from building walls with Roger Waters and Craig Blundell, familiar for his work with Frost* and Pendragon, among others.

As you entered the hall, you could see on stage a solitary figure sat at a desk, as if working alone in an office. The role was played by the Polish actress Carrie Grr, who is the featured artist in the concert visuals for the Hand.Cannot.Erase album. Eventually as the lights went down and the show started, she stopped working, put on her coat and walked away as her figure appeared on screen and Wilson’s band began a performance of the whole album in sequence, in contrast to the show at the Civic where the songs were spread through the show. The highlights in the album’s performance were many; the melodic, commercial title track, a thundering ‘Home Invasion’ with this terrific band operating at full power, and the awe-inspiring instrumental finale, but the absolute highlight was when Wilson introduced ‘Routine’. The vocalist on the album track, the Israeli singer Ninet Tayeb, had previously been unable to perform on the tour having just had a baby, but there was a huge cheer when she was brought on stage to sing the track on the night. And if that reception was enthusiastic, it was nothing compared to the ovation after she delivered a quite magnificent performance live. Accompanied by a heartrending video by Wilson’s visual collaborator Jess Cope, it was powerful, emotional, technically brilliant and one of the best things I’ve seen all stage all year.

After the interval, there seemed to be a heightened sense of expectation for what surprises were in store, and it didn’t take long for things to be revealed. For the first song of the second half, Wilson introduced Opeth’s Mikael Akerfeldt, with whom he’d collaborated on the Storm Corrosion album. Although he said that they’d originally thought that the album was ‘unperformable’ live, nonetheless they gave us the ominous, forbidding ‘Drag Ropes’, and if that wasn’t enough, after Akerfeldt departed the stage, to a well-deserved ovation, they followed that with the chilling ‘Index’; a song on which every episode of ‘Criminal Minds’ appears to be based. Thanks to the superb sound, which included elements of surround sound, the music was filling the whole hall, encouraging the audience to become completely involved. It was interesting that at almost no point in the proceedings could you hear audience chatter or any of the other background noise that’s common at gigs these days, so wrapped up in the music were the crowd.

After the intensity of the opening two songs of the second half, the band lightened things a little with a Porcupine Tree song, pleasing everyone in the audience by the sound of it, the lyrical, almost pastoral ‘Lazarus’, and then another surprise. Wilson noted that they had material left over after Hand.Cannot. Erase was completed, and some of it was to be released on an EP in the New Year. This included ‘My Book Of Regrets’, which, as he said, was a long and complicated song (an announcement greeted with a good-natured cheer from the crowd) but it’s a song chock full of great riffs, and if this is an indication of a direction he intends to take, I’m all for it. But after that comparatively lighter moment, the intensity was turned back up for the dark power of ‘Harmony Korine’, which included a segment of ‘Temporal’ from Wilson’s doom/ambient project Bass Communion, and then a theatrical gauze curtain was lowered over the front of the stage for the intro film to ‘Watchmaker’. This has the effect that when a light is shown onto it, it becomes opaque, yet when lit from behind it becomes transparent. It’s a very striking effect and I’m surprised more bands don’t use it. The curtain was dropped as the electronic pulse of ‘Sleep Together’ began, and if anything, the band rose to new heights as the song reached its climax (sorry!), with the riffs echoing round the hall. A superb end to the main set, although there was more to come, in the shape of two encores. Firstly, the comparatively lyrical ‘The Sound of Muzak’, on which Wilson invited the crowd to sing the final chorus, then the emotional powerhouse of ‘The Raven That Refused To Sing’ bringing an utterly memorable show to a close. It was interesting that the man chose this point to introduce many of the people who brought the Hand.Cannot.Erase tour to life, as if drawing a line before the second night. This included Lasse Hoile, Jess Cope and Carrie Grr, as well as the band’s musicians. 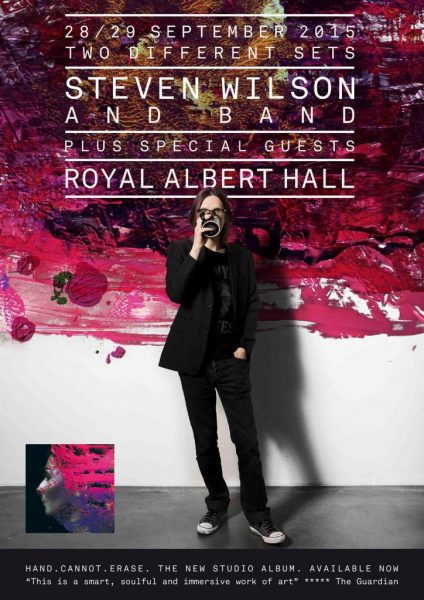 Unlike the first night, the second show actually had a support act. Actor/Comedian Matt Berry (you may have seen him playing, among others, Douglas Reynholm in ‘The IT Crowd’ and Stephen Toast in ‘Toast of London’) also has a musical career, and has released several albums on which, Mike Oldfield-like, he’s played most, if not all of the instruments. He brought a 7-piece band with him tonight, and while he’s a big Prog fan, his songs sound more psych influenced, if you’re being particular about genres. He’s a decent singer, though, and played rhythm guitar as well as synth in the show. His song ‘Snuffbox’ had a guitar and trombone duet, which was a fairly unique experience as far as I was concerned, although the subsequent bass and drum solos were a bit over the top for a support slot.

Steven Wilson had promised a different set for both nights, and he proved true to his word, opening the second show with another Bass Communion song, ‘Cenotaph’ for which the individual band members entered the stage one by one to improvise around the main riff, and moving straight into ‘Introspection’, a strong and powerful opening. The first visit to the Porcupine Tree years came next with the lyrical ‘Shesmovedon’, which sounded edgier and funkier than the original version. Then the first repeat of the previous night’s show, with the return of Ninet Tayeb for another performance of ‘Routine’, and, astonishingly, it was even better than the previous night’s. Perhaps she’d gained confidence from the reception she’d had for her first performance, but this was even more emotional, even more powerful, and the standing ovation was richly deserved. ‘Well’, said Wilson, ‘the only way to follow that is with some dumb heavy metal’, which meant a thunderous and outrageously heavy ‘Open Car’.

When it was announced that there were to be guests for each show, it was only to be expected that the internet would be alive with speculation, with all kinds of prestigious names from the world of Progressive Rock, and beyond, being suggested. The man himself was pleased to put an end to this, by saying that he wanted to feature people with whom he’d worked with over the years, and introduced Guthrie Govan, who stayed for two songs. The first was ‘Home Invasion’, then Wilson introduced sax player Theo Travis, who’d not only been in the band that toured in February, but also had played on this stage the previous week in David Gilmour’s band, to join in on the more melodic ‘Drive Home’, which also featured a superb solo from Govan. Dave Kilminster returned for the brutal instrumental ‘Sectarian’ and for some from from Wilson’s solo work, before an edited version of ‘Raider II’ ended the main set.

The first encore was ‘Dark Matter’, from Porcupine Tree’s Signify album, but the real crowd pleaser came on the return for the second, when Wilson announced the entry of former Porcupine Tree drummer Gavin Harrison, which brought the crowd to their feet and caused one over-excited fan seated behind me to wonder if Colin Edwin and Richard Barbieri were waiting back stage for a full-on PT reunion. Alas, he was to be disappointed, but hearing reruns of ‘Lazarus’ and ‘The Sound of Muzak’ with half of the band , and with performances the equal of those on the first night, was more than good enough.

As the man himself said, rehearsing four hours of music at the same time as touring Europe, integrating the guest performances and preparing a show that matched the earlier tour in terms of presentation, was some undertaking and you can only stand back and applaud not only the effort that went into it and the results. These were some of the best played and best presented rock gigs, of any genre, that I have seen. It was a privilege to be there.