It happened. For a short while during the early days of lockdown it actually happened,  nature revived. Emissions were radically down, the canals of Venice were clear again, animals reclaimed their terrain, dolphins and whales braved new waters. Chemtrails disappeared, air pollution dropped drastically (49% down from the previous year in Rome). Mother Nature took a deep, cleansing breath. Ironically, it took a global pandemic to give Greta Thunberg the world she fought for.

Our relationship with nature changed too. We went out in it more, without cars, actually, y’know, on foot. We looked at stuff, nice stuff. We listened to birdsong. Foxes, bees, badgers, they all thrived. We appreciated sunsets and looked to the stars. We slowed down and reconnected. And then some noob went for an eye test in Durham and the pubs reopened. Oh well, nice while it lasted.*

Which kind of brings me to Steve Von Till and his latest solo album. Von Till, for the uninitiated, is the frontman of post-rockers Neurosis. He also does a nifty line in chilled solo stuff and ‘No Wilderness Deep Enough’, his latest, obvs, tackles natural themes. Von Till acts as our guide, our shaman, leading us through the chaos and uncertainty of modern life towards a more natural, holistic, way of being. The album is a companion piece to ‘Harvestman’ – his latest collection of poetry and lyrics and together they are, as Von Till explains, “exploring the great disconnect: from the natural world, from each other and, ultimately from ourselves”. It is, he says, “rural psychedelia”.

So what does that entail? Well, a lot of ambient music for starters. But a unique kind of ambient. There are aching strings, so there’s neo-classical in there. There’s electronic ambience too, occasional background crackles of interference. Pianos are treated, muffled, echoey. There are sound effects – whether they are field recordings or created sounds I have no idea but they’re here – wind through forests of trees, waves breaking on a shore – all present and correct. There’s a spot of gothic Americana. These tracks don’t go anywhere. They exist, they are.

And then there’s Von Tills voice. Deep doesn’t begin to do it justice. It’s elemental, as bottomless as the ocean – you damn near get the bends as you come up for air after listening to it. It contains a quarry full of gravel, a Marshall stack lined orchestra of basses. It’s sonorous, dizzying profound. “Reach for the infinite deep…” he intones at one point. He does indeed.

The album is calming and unsettling in equal measure. ‘The Old Straight Track’ is full-on Eno ambient. A balm. It’s drone has an epic, glacial beauty. Songs waft by, infused with a black hole, gossamer heavy elegance. “Confusion carries us through the night” observes Von Till in the almost lullaby-like ‘Trail The Silent Hours’. Yeah, darkness happens, he tells us, but that’s ok, it’s alright.

The strings of ‘Shadows On The Run’ appear, like a heavy Penguin Cafe Orchestra. It’s powerful and affirmative – an electronic thrum begins to take prominence and vies gently for dominance with the lush strings. We end with ‘Wild Iron’ and more rustic droning. “Tear out my entrails to decypher” growls Von Till – oh no, this ain’t your average quinoa munching ambient fare. Von Till then becomes an echoing choir – singing to the highest mountaintops, the tallest tree canopies, the farthest reaches of our World.

So yeah, heavy. It has a sound kinda born of those New Age sleep CD’s you find on that stand in garden centres – ‘sounds of the earth’, ‘wolf call’ – but this is infinitely deeper, heavier, more honest and profound. It’s actually saying something and it also knows that it doesn’t have all the answers. What it does have though, is grit and heart and soul. So let’s try and figure all this shit out together dude.

*other opinions are available. Gammons and Tin-Hatters can stand down and take it easy.

Released by Neurot Recordings on 7 August 2020 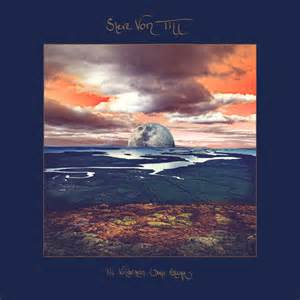