Legendary guitar virtuoso Steve Vai is back with ‘Inviolate’, his first studio album since 2016’s ‘Modern Primitive’. So does the arch widdler have any new tricks up his frilly sleeve?

Firstly, if you’ve watched the above video, you’ll know that he has a new guitar…if, indeed, the word guitar does justice to the steampunk behemoth he’s wielding. The Hydra is, obvs, a many headed beast – a two-headstock, three-necked thing that includes a 7-string, a 12-string and a partially fretless bass. It also has harp strings plus *deep breath* single coil, humbucking, piezo and sustainer pickups plus hard tail and tremelo bridges. Ridiculous or genius? The decision is yours…and also applies to the album as a whole.

Your tolerance of instrumental music and extreme technical noodling will be prime factors in deciding whether or not you’re going to enjoy this album because, rest assured, Vai doesn’t really pander to non shred-heads on ‘Inviolate’ – this is all about the shred.

The album kicks off with ‘Teeth Of The Hydra’ with absolutely no concessions given. Immediately, there’s that Vai sound. Indeed, in describing this album, Vai has himself said, “it’s very Vai, whatever that means”. The tone is glorious. Soaring, yet with dirt hovering in the background. He runs the gamut of his trademark ‘things’, conjuring a tsunami of sounds. Guitarists – prepare to weep. I mean, how is half of this stuff even possible?

And then we’re off into the album proper. Next track ‘Zeus In Chains’ is preposterously technical, yet catchy at the same time. It is melodic one moment and then shifting with a near industrial heft the next, it’s delicate, angular solo barrelling into some more huge distorted riffage.

‘Little Pretty’ heads off into some alien slide laced jazz fusion (which becomes a frequent visitor) before heading off into a serious noodle zone. Technically dazzling I’m sure but attention began to wander for the first time…and not the last.

From here on in, technique begins to take over in earnest. ‘Candlepower’ has a nicely abstract riff but how often you will go back and listen to it for pleasure may be a cause for concern. Jazz rock begins to become the dominant form while ‘Greenish Blues’ ups the, erm, blues ante before again descending into a spacey noodly jam. We then come to ‘Knappsack’, a song written and recorded while Vai had his right arm in a sling following shoulder surgery. That’s right, it’s a one handed song. Yes, it’s interesting to listen to but it rapidly becomes an exercise in ‘look what I can do’ grandstanding. I wonder if there are any mistakes on this album? And if there are, how would anyone not in Vai’s rarified stratosphere actually know?

For me, this album is a disappointment. Yes, Vai can play, we all know this but, for the layman, the causual listener, there needs to be more than that. Vai has played on some brilliant albums with some brilliant artists – Zappa, Whitesnake, PIL, David Lee Roth, and maybe that’s where he excels, as the mind-bending guest star, the “stunt guitarist” as Zappa described him. This is all technique, it’s all he’s got here. It leaves you craving a polar opposite, a dose of something raw, urgent, fucked up and heartfelt. Cautiously recommended.

Released on 28 January 2022 by Favored Nations 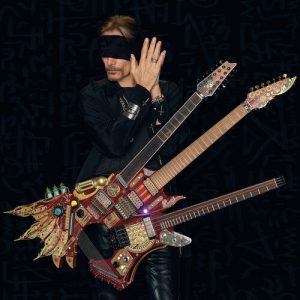