Post Sex Pistols, guitarist Steve Jones floundered. There was the general all-round dodginess of the whole ‘Great Rock n Roll Swindle’ thing (Sid/Brazil/Ronnie Biggs). Then, once an (un)healthy smack habit had been acquired, the music suffered. Sure, there were high points (The Professionals), but nothing lasted. Jones became an inveterate jammer, playing with Sid, The Clash, Phil Lynott, Joan Jett, and pretty much anyone else who came within a needle’s distance. Not forgetting the could-have-been-good Chequered Past. Finally, the addled Jones had had enough, and decamped to LA to get clean.

Once drug free, Jones embraced LA life, growing his hair and straddling a Harley. His creative juices also returned and, once he’d managed to assure a few record companies that he wasn’t a one-foot-in-the-grave liability, work began on his debut solo album – ‘Mercy’. Minimal was the byword here. Almost everything was written by Jones, he also produced and handled guitar, bass and vocals while assembling a small, hand-picked band.

The finished release was almost certainly not what anyone was expecting from the knotted hanky wearing punk guitar hero. Although there had been clues….despite Rotten’s anti-vocals, the Pistols always had melody and fantastic production. Add to this the fact that Mick Ronson was Jones’s guitar hero and he had, in interviews, expressed a sneaking admiration for Journey. What we have here, ladies and germs, is the first post punk AOR album.

Lead track and minor hit ‘Mercy’ sets the tone. It’s tuneful MTV soft rock with a wonderful melodic guitar line. The fact that it was used in a high profile episode of ‘Miami Vice’ did it no harm either. We then roar into the albums first rocker, ‘Give It Up’. Yes, it has that patented guitar chug and ends in a veritable firestorm of metallic Chuck Berry soloing but it still has a mellow LA sheen to it – perfect for cruising down endless sunset highways.

And those two tracks on a loop pretty much sum up the rest of the album. The ballads all take their cues from ‘Mercy’ – chock full of soul searching crooning, twanging guitar and big 80’s keyboards. Several of these tracks gained exposure through appearing on various soundtracks (‘Sid and Nancy’, ‘Something Wild’), which did Steve’s profile no harm.

Then there are the rockers, all featuring that Steve Jones mammoth guitar sound – Townshend powerchords mixed with Ronson solos – thunderous, bruising and endlessly multi-tracked. But controlled, tuneful. The only time you feel he truly lets himself off the leash is during the momentous instrumental section of ‘Through The Night’ – Jonesy finally giving it some bollocks. We finish on a genuine curveball – a faithful cover of ‘Love Letters’ – Jones giving it some full-on Elvis crooning over a piano, another hint at his softer, tune-loving side.

This was, you feel, a transitional album and one he had to make. Take a look at the song titles…it’s his rehab album, his twelfth step. The only time Jones himself feels he went too far was with ‘Drugs Suck’. It was too preachy, making him sound, in his own words, “like a prick”. But it was a first step – not universally loved but essential, Jones was dipping his toe back into the cold waters of straight music making.

It’s certainly not his best work but it still has highlights. He was finding himself, edging back into the limelight. Combine this with Andy Taylors brilliant solo album ‘Thunder’ (released the same year and co-written and performed with Jones) and you have a fine body of powerful AOR and, from here on in, no-one doubted that Jones could play. Plus, he was moving on. No longer a punk (although, somehow, that attitude could still be felt between the grooves) he was embracing rock. The remastering, by Rock Candy Records, is also first class, the album has never sounded better.

And, in the clubs and alleyways of LA, a new generation of bands were beginning to namecheck The Pistols… 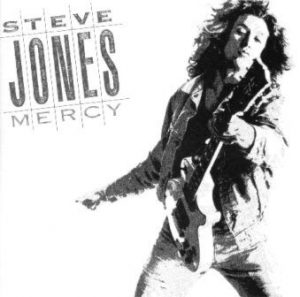