Steve Cropper, in case the more metal minded among you don’t know, is a legend. He was Otis Redding’s songwriting partner. He was the rhythm guitar engine room of Booker T. and the MG’s, the house band of the fabled Stax record label. He wrote and played for, as well as Otis (which, in itself, earns him legend status), Sam and Dave, Wilson Pickett and Rufus Thomas. Purely as a player, he’s performed with…well, everyone. From Lennon to Frank Black. Oh yeah, he was in the Blues Brothers band too. When asked his opinion about Cropper, Keith Richards simply replied: “perfect, man”.

And now he’s releasing ‘Fire It Up’, what he describes as his first proper solo album since 1969. And a joy it is too, full of subtle little nods to that classic 60’s Southern soul sound. With a small but tight band and Roger C. Reale handling vocal duties (no pressure there Rog), Cropper serves up 13 tracks of guitar-led groove.

We start with a brief instrumental and there it is. Immediately. That feel, that touch, that sound that’s straight outta Memphis – a mix of gospel, funk and blues. It’s instinctive and natural, laced with swampy guitar and decades of experience.

And then we’re off into the album proper. Reale acquits himself well, he’s not Otis but, then again, who is (other than, y’know, Otis himself). To his credit, Reale doesn’t try to be anyone else, he has grit and soul of his own, and that’ll do. The guitar work is as in the pocket as you’d expect from the man in 38th place in the Rolling Stone ‘Top 100 guitarists of all time’ list.

A lot of the tracks don’t go anywhere in particular, they’re grooves, possessed of killer beats, subtle horns and touches of Jake Blues style Chicago harp. ‘Out Of Love’ could be a long lost BB King toon, dripping with Hammond Organ and slinky interplay. ‘Far Away’ includes a knowing nod to an Otis classic (give it a listen, you’ll spot it) while ‘Heartbreak Street’ has some beautiful Stax guitar flourishes. Indeed, one of the pleasures of this album is in playing ‘spot the fill’.

Cropper is a master at dropping just the right phrase at precisely the right moment. His timing is immaculate. Before you know it we’re at a reprise of the original intro, which is more of the same opening jam – and who wouldn’t want that? It’s sublime. Just release an album’s worth of this Steve, who needs anything more!

Cropper clearly agrees because the final track is…the opening jam for a third time. And why not, a groove of this Meters-esque brilliance is simply too good to let go. And we’re done – this is a fine album, warmly produced and played to perfection. “I remember yesterday like it’s right in front of me” sings Reale at one point and that kinda sums up the album. It’s old school soul, looking back while adding contemporary lyrics – time’s have changed but sometimes not enough. It’s not trying to be anything it isn’t, there are no RnB tropes grafted on. Cropper is savvy enough to know that what he does is plenty good enough. An album that basks in the evening glow of the dock of the bay. Recommended.

Released by Provogue Records on 23 April 2021 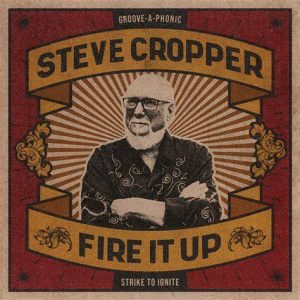