Steelhouse Festival is delighted to announce that this year’s Sunday Headliners will be Europe. The Swedish Rock legends, in a UK festival exclusive, will make a triumphant return to The Mountain having first appeared at the 2014 event. Hot off a UK arena tour, they return to make good on their commitment to headline the 2022 event after being announced for the 2021 edition which ultimately had to be postponed because of travel restrictions. 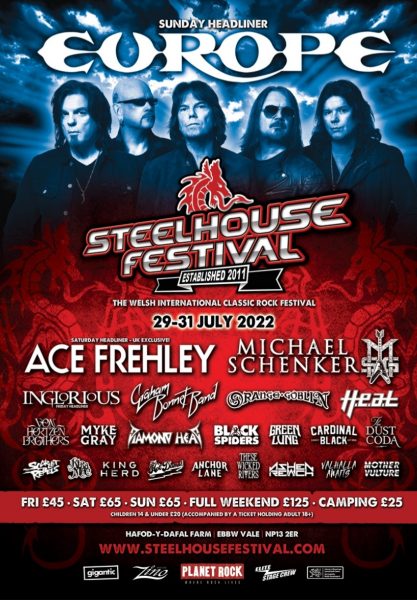 Joey Tempest said, “Myself and the boys are well pleased to be back at Steelhouse after last year’s unfortunate postponement. We’re all back on track and up for some great fun on The Mountain – see you all very soon!”Also recently announced, The Graham Bonnet Band, fronted of course by the former Rainbow lead vocalist who appeared on such classics as Since You’ve Been Gone and All Night Long. They will be making their Steelhouse debut on Saturday 30th of July with set based on Rainbow’s iconic, ‘Down to Earth’ album.Max and Mikey said, “We’re are beyond happy to announce, FINALLY, that Europe will make it back to the top of the Mountain in 2022. We have had to keep this under wraps for quite some time. There was of course a huge amount of disappointment when it became obvious that the travel restrictions of 2021 would prevent them from making that headline appearance. However, when they made it clear they wanted to fulfil their commitment, we knew it would be worth the wait.”Making a welcome return to Steelhouse are Finland’s Von Hertzen Brothers. Mikko from the band said, “It’s been way too long since we climbed up the hill to play for the wonderful crowd of the best, welcoming and sunniest Rock Festival in Britain. We are thrilled to be on the bill and will deliver a show to remember. That’s a promise!” Max and Mikey added, “On a personal level we’re overjoyed to have VHB return to Steelhouse. They are one of our favourite bands of this century. A real marker for where rock music which contains, depth, ambition and integrity can go…It also didn’t hurt that the band’s fans mobilised themselves and requested en masse for them to play – something we were more than happy to facilitate”.Looking forward to his first Steelhouse Festival appearance Graham Bonnet said, “I am very excited to be back in the UK this summer and especially to be playing Steelhouse – a festival which I’ve heard so much about! We will be playing all of the ‘Down to Earth’ classics along with everything else you want to hear…So join us on top of The Mountain!” This line up offers the best of all possible worlds for lovers of classic rock and of Steelhouse. Friday will kick harder than ever before – and of course Ace Frehley is an undisputed icon of Rock, the incredible Michael Schenker, Diamond Head unrivalled as old school legends. Orange Goblin and Green Lung bring, in every sense, a burst of colour and verve – each pioneering their own way.Steelhouse Festival were honoured to be voted ‘Best Festival’ by the followers and members of the NWOCR social community at the end of 2021. 2021, in the face of overwhelming odds, was a resounding success – marking as it did the 10th Steelhouse Festival. 2022 has a lot to live up to, but is well on the way to being the best ever with an outstanding line-up and production upgrades including its biggest ever stage. Weekend and all day tickets are now on sale; demand has been such that Glamping  sold out weeks ago.