Steelhouse Festival has been forced into a late change ahead of this year’s event. However, the hugely positive outcome of this is that the mighty SAXON are now headlining Steelhouse Saturday, 30th of July.

This will be the metal legend’s only UK festival appearance of 2022. They will be performing a ‘40th Anniversary Greatest Hits’ set.

In a statement about the line-up change, promoters Mikey and Max said, “We have been informed by Ace Frehley’s representatives that, due to unforeseen circumstances on his part, he needs to cancel his entire European tour including his appearance at Steelhouse”.

They continue, “Our most heartfelt thanks to the mighty SAXON. A bona fide British metal institution who have gone above and beyond to make this happen and in the process make Steelhouse 2022 an even more mouth-watering prospect. Every song in this set is a true metal classic.”

Biff Byford of SAXON said, “We’ve been asked to step in and headline Steelhouse Festival, Saturday 30th July. We love playing there so happy to help out. We’re doing our 40th anniversary set list so all the big songs. And it’s our only UK festival this year so see you in Wales. Fill your heads with heavy metal thunder” 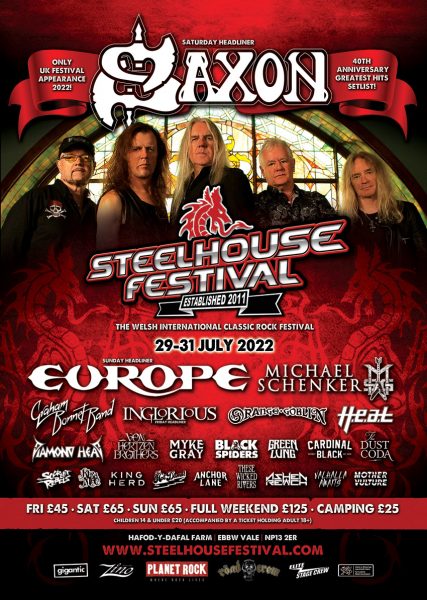 Steelhouse Festival was honoured to be voted ‘Best Festival’ by the followers and members of the NWOCR social community at the end of 2021.

2021, in the face of overwhelming odds, was a resounding success – marking as it did the 10th Steelhouse Festival. 2022 has a lot to live up to, but is well on the way to being the best ever with an outstanding line-up and production upgrades including its biggest ever stage. Weekend and all day tickets are now on sale; demand has been such that Glamping sold out faster than ever.