Steelhouse Festival is excited to reveal the full SIX band Friday line-up which offers a potent dose of the very best of the NWOCR. Previously serving as a curtain raiser for the main weekend event, Friday is now a full blooded first day in its own right. Kicking things off in fine style will be Inglorious, Myke Gray, The Dust Coda, Scarlet Rebels, The Hot Damn! and Valhalla Awaits. What a way to start; and further evidence of the commitment to support new acts alongside the established stars. 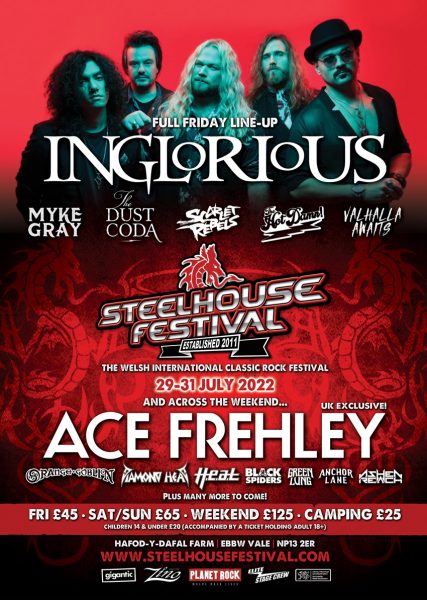 Promoters Mikey and Max say, “The opening night at Steelhouse has really come into its own over the last few years. It’s now a legitimate full blown opening day. This year’s Friday line-up really shines a light on the best of the New Wave of Classic Rock. Headliners, Inglorious, are one of the genre’s main torch bearers. Scarlet Rebels and Valhalla Awaits are the latest bands from our homeland to really make an impact, whilst the Dust Coda have already broken into the UK top thirty. The Hot Damn! bring an unbridled joyful energy to the proceedings. Add to this ex-Skin/Jagged Edge mainman Myke Gray playing all those classic tracks from his back catalogue – many of which would have influenced the rest of the bill – you’ve got a Friday line-up that hopefully appeals to the NWOCR army!”

This line up offers the best of all possible worlds for lovers of classic rock and of Steelhouse. Friday will kick harder than ever before – and of course Ace Frehley is an undisputed icon of Rock, Diamond Head unrivalled as old school legends. Orange Goblin and Green Lung bring, in every sense, a burst of colour and verve – each pioneering their own way.

Steelhouse Festival were honoured to be voted ‘Best Festival’ by the followers and members of the NWOCR social community at the end of 2021.

2021, in the face of overwhelming odds, was a resounding success – marking as it did the 10th Steelhouse Festival. 2022 has a lot to live up to, but is well on the way to this being the best ever. Weekend and all day tickets are now on sale; demand has been such that Glamping is now sold out.