Quo’s Last Night Of The Electrics gig in London’s O2 Arena last year was designed to be the end of a “physically demanding” era. In doing so it presaged a finality that no one could have foreseen. In one of those bizarre quirks of fate, in parallel to the tour planning, Rick Parfitt became seriously ill. It’s a matter of record that he died before the end of the year.

Guitarist Parfitt and vocalist/guitarist, Francis Rossi were the frantic four’s dynamic duo. Another one of those creative, artistic pairings whom fate just seems to bring together, like Jagger&Richards and Plant&Page. Unlimited praise then for supersub, Richie Malone, who stood in seamlessly for Parfitt, twinning up with Rossi to recreate those indestructible – and sometimes finely filigreed – riffs that fuel Quo’s infectious brand of boogie. And for Andy Bown and John Edwards, who filled in on Parfitt’s vocal parts.

On stage, forever making the unoriginal sound desirable, the band shimmy and sashay through a triumphant parade of hits and fan favourites, leavened with the kind of confident, cheeky, between-song humour that can only come from years of experience. Rossi’s vocals have deepened over the years, taking the key down a shade, but the voice is strong, the motivation clear.

20 tracks from “an incredible back catalogue” stack up on the DVD, each one displaying the the band’s unchanging MO . . . just a bunch of denim clad boogie warriors, each song firing tiny bolts of lightning to the brain, forcing involuntary head bangs, foot taps and a general speeding up of blood flow through the body. The band’s only ever mis-step has been to momentarily forget they are a guitar band, ceding too much ground to Andy Bown’s keyboards. Latterly, the piano was used as it should be – to flesh out the skeleton of a song or to add ornamentation to an hypnotic, pulsating, hard rock rhythm, and even the unconverted eventually concede that it takes a lot of skill to make it sound this simple.

And so, for Quo, the future is acoustic, at least assuming they continue indefinitely without Parfitt. With such an immense back catalogue, we will continue to hear from them, one way or the other.

Last Night Of The Electrics was an unsentimental wave goodbye. Waving, not drowning. Definitely.

The release comes in several formats, from the entry level DVD, through 2CD/DVD sets and Blu-Ray, to Limited Edition Black or coloured triple vinyl in gatefold, peaking with time capsule material – a mind boggling earBOOK – 2 CD, 1 DVD, 1 Blu-ray and a book! You pays your money etc etc 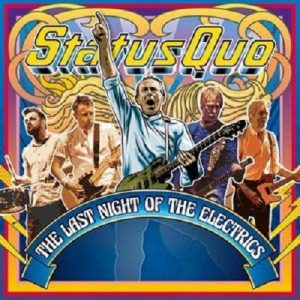