Don’t Give Up, Never Say Die, Fight To The End etc etc

Bush’s breathy, emotive vocals lend themselves to the epic treatment of those genre staples, love, heartbreak and keeping the dream alive, always striving for something that is just out of reach, where every song could have been the theme tune to “Rocky” or, god forbid, “The Karate Kid”.

Not satisfied by arming his songs with a crescendo of hooks and towering choruses, Bush writes lyrics consisting almost entirely of rhyming couplets that involve fighting to the end, not surrendering, or never saying die. New songs ‘Change The World’, ‘Live The Dream’ and ‘Never Surrender’ reinforce the view that Bush is channelling his inner self help guru, like they all mean Carpe Diem when translated from AOR-speak. Strangely, none of this is an obstacle to enjoyment. Another new song ‘Born To Win’ drives home the message yet again, ”never surrender, heroes don’t give in”. Yet, yet, it still convinces…the irony is, like Rocky’s heroic fiction, the old fighter’s still got it. It’s so compellingly and adroitly done that what’s initially underwhelming eventually becomes exhilarating, a real guilty pleasure.

By track 5 we are looking for a change of pace. ‘Story Of Love’ packs in more clichés to the inch than most other “love ballads”. But again, Bush has the conviction, you can feel his pain, his desire. Some truths are worth repeating, again and again, and when expressed with such passion the words burn right through the page.

‘Break These Chains’ and ‘The Other Side Of Love’ dial down the bombast a little. Bush isn’t holding back here, he’s simply keeping something in reserve, confirming that he’s still the same confident, consummate melodic rock craftsman who has been making it all sound so smooth for years.

This album might not change the world but maybe it’ll make it a marginally better place. 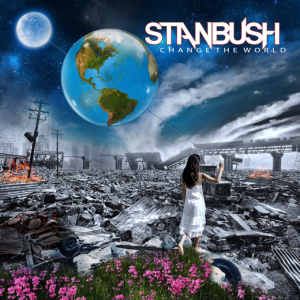