23rd July 2016 marked the 9th annual Splendour Festival at Nottingham’s famous Wollaton Park, gracing the city with its biggest concert this side of the millennium. It’s some feat, that, and what’s more, it had a line up to match. Whilst it may not be a festival of the same variety that Midlands Rocks would usually cover, horizons have been broadened on this occasion, with the exception of The Darkness and Stiff Little Fingers, of course.

The stage set up and timings run efficiently with each artist’s set beginning on the Confetti stage as those on the Main Stage finish, and vice versa. Kicking things off over with Confetti is the local talent in Eyre Llew, a Rock Trio who are currently working their way through a summer long UK-sprawling tour. Their sound is very ambient and releases plenty of positive vibes underneath the glow of the July sun – they’re bright and young, with a lot of promise. Next up is probably the currently most successful local lad on the bill – Reggae-tinged and Soulfully voiced R’n’B artist Ady Suleiman. His music is original and entertaining, much to the approval of his ever-growing audience, and his spoof cover of Damien Marley’s “Welcome To Jamrock” (Welcome To Grantham) is brilliant. 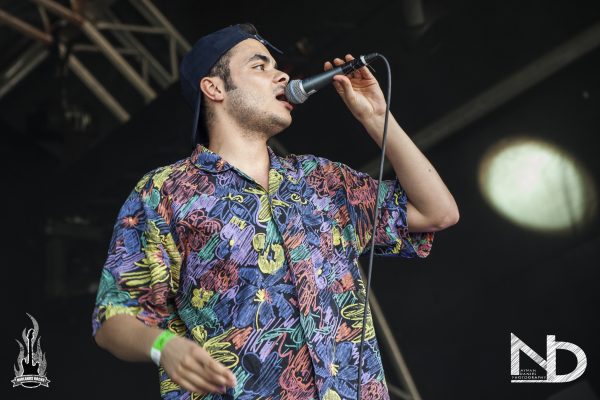 Moving through the rest of the afternoon, These Your Children shine as one of the day’s best bands. They’re also of a very chilled out temperament, with a lovely stage presence and no struggle in keeping the crowd engaged throughout the entirety of their set. The two vocalists complement each other extremely well and are a joy to watch, as is the South African Jeremy Loops who deservedly nabs a solid spot on Main Stage. Over in the UK especially for the day, before his stints later on in the year, he’s absolutely thrilled to be playing to such a crowd and one of the most genuine, happy personalities I’ve seen grace a stage. He enthusiastically demonstrates how audio looping works (hence his stage name), before beat boxing, playing the acoustic guitar, the harmonica and singing for the whole set. Another artist with a stimulating new sound, Jeremy Loops is one to watch, and already a success in his native country, so we hear from our friends over at the SA Music Scene. Turin Brakes are responsible for one of the first ‘big’ hits of the day, in the form of 2003’s “Painkiller”, which is a summer highlight of their otherwise unswervingly steady set. They don’t make much of a stir, but keep the stage and crowd ticking over, at least. 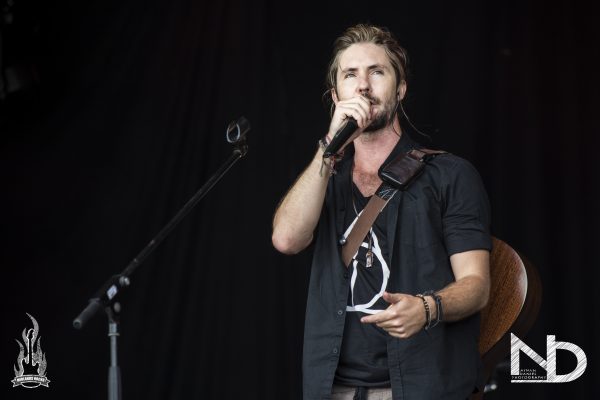 Joint oldest band on the bill, Stiff Little Fingers aren’t done justice having only being granted a thirty-minute set, even if their average track-length barely reaches three minutes. Not to worry, the middle-aged Punks get things going with no hesitation and make clear that their set will be densely loaded with songs and no talking, quickly sparking the most crowd movement of the day so far. When the stage compare asks the crowd who from the audience had been following the band since their inception in the 70s, an overwhelming cheer goes up. That’s not to say that there aren’t plenty of young ones getting stuck in in the pit and having a great time, though. 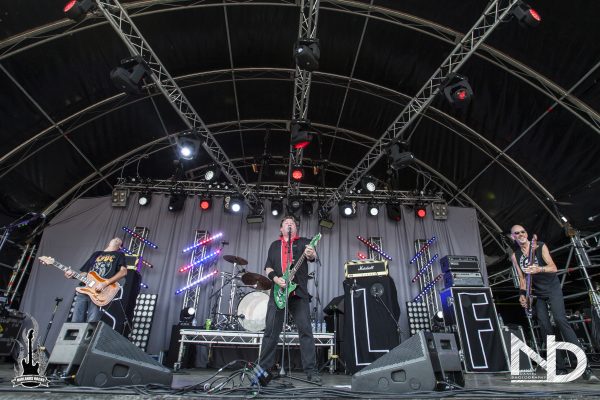 Switching things back to a genre more familiar to most of Splendour’s festivalgoers, Jamie Lawson takes to the stage, less than a year after not only his first UK charting album, but also his first Number 1 album. For an accolade as such, he is extremely humbled by his crowd and honoured that his music is being sung back at him. He continues very much in the same vein as those before him on the main stage; a perfect watch to accompany the raging sunshine. 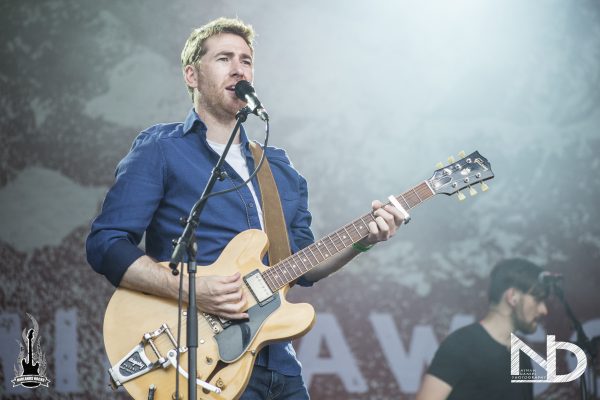 By 5pm, its getting towards the business end of Splendour Festival, with the first of three once-more-famous mid-2000s bands about to begin. The Rifles broke the Indie-Rock scene amongst any others in 2006, despite their highest charting album falling in 2014 and hence their fame in recent years can come into debate, here. Their performance is consistent and they have a good sound, but their somewhat generic Indie-Rock and lack of enthusiasm doesn’t compare to the bright youngsters that occupied earlier slots on both stages. Before returning to Indie-Rock not too dissimilar, a trip to the Main Stage sees Reggae and Dub laden Pop veterans UB40 entertain the biggest crowd of the day. They sound no different to recording, or the performances from their prime, beating the dilution that many bands of their era suffer from in their live performances. The Nottingham crowd absolutely laps it up, and their bass is almost overpowering for those at the front, in the best possible way. 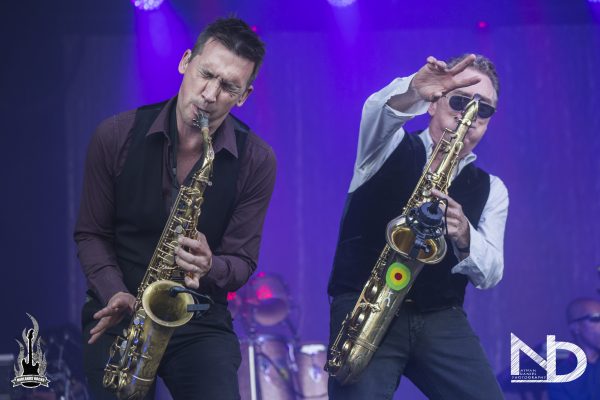 The Fratellis claim the other stage immediately after, and for a band who have struggled to remain relevant in recent years, they absolutely kill it. Huge, huge performances of “Henrietta” and “Baby Fratelli” go down a treat, but not so much as all-round English anthem “Chelsea Dagger” does. The famous jump-cum-dance appears in its thousands as the crowd bounce for almost the entirety of their closing track – one of the best moments of the day, for sure.

The Human League sport an ever odd and eccentric frontman in the form of Phil Oakey, who seems largely uninterested and lacking in enthusiasm, with a voice that’s probably seen better days too. Despite which, the crowd seem to love it all the same, as do the rest of his band who couldn’t look happier to be there. They might be past their best, but they’ll probably never stop playing festival slots like this, so we’ll just let them have their time. 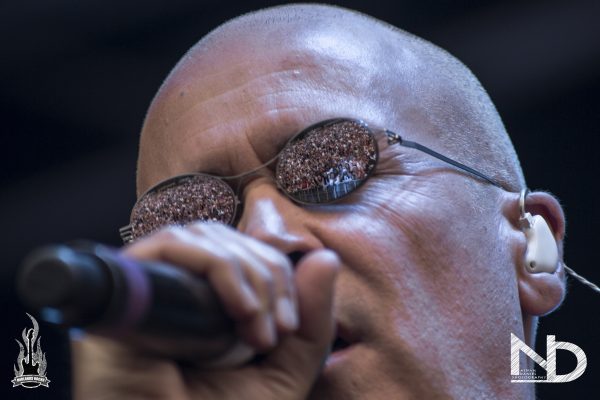 Ultimate band of the Confetti stage are The Darkness and having never seen them before, I was doubtful as to how their live performance would fair. I needn’t have been, though, because they’re little short of phenomenal. Justin Hawkins is a pure natural entertainer, having the crowd laughing and singing right from the off (not in unison, of course). He fumbles around with two microphones, unable to decipher the faulty one of the two, and gets the crowd involved wherever possible. His voice seems to be in top condition, and the band behind him is tight and great to watch. Acknowledging that he is indeed at what is predominantly a family festival, he conducts a ‘who’s who’ of the kids in the audience, asking them to get on their parents shoulders and vote for either the “clean” or “dirty” version of the alternatively named “Get Your Hands Off My Woman Motherfucker.” Of course, an overwhelming vote sways in favour of the swearing version, much to the kids’ delight. They play all the hits, which sound just as big as they ever did, and what’s great for a ‘Rockstar’ band, they aren’t shy of taking the piss of themselves either. A cracking end to a stage packed full of talent new and old. 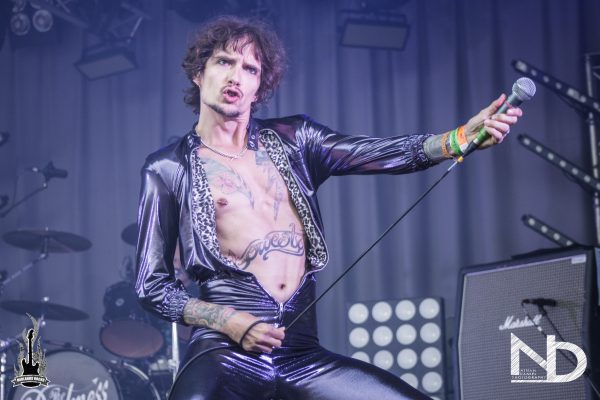 Following the closure of both the Confetti stage and the Acoustic stage, Jess Glynne is responsible for rounding off the whole of Splendour with her huge Mains Stage slot. She enters wearing a sparkling, silver outfit that looks like the product of 80s Dance fashion and B-list movie space attire, with a backdrop and drum risers to match. It’s all very glittery and she carries a huge Pop Star aura with her that genuinely excites the best part of a 20,000 strong crowd. She’s had more UK Number 1s than years that she’s been active as a singer, and she plays more Radio hits during her 90-minute set than appear throughout the whole of the day. She seems genuinely down to earth when talking to her audience and is an absolute spectacle on stage, complete with the energy of her dancers and band. Jess Glynne’s set is an impressive closure to the biggest Splendour yet, which will hopefully open the door for even bigger festivals in the future. Here’s to Nottingham. 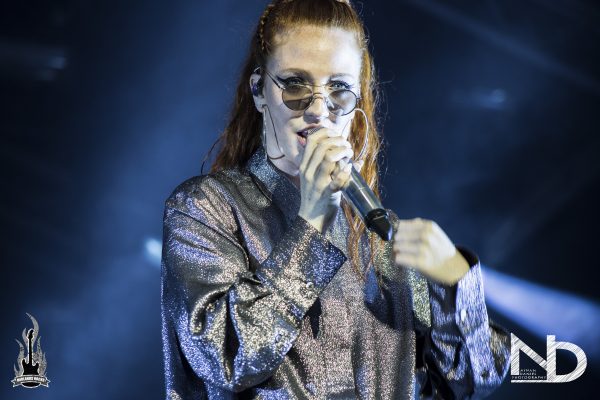 Check out the full photo album on Facebook here.