With a career peaking in the US with their #25 hit ‘I Got A Line On You’ (which also made the Canadian top 50) Los Angeles band Spirit never really cracked the UK market. Their distinctive laid back California sound not really fitting in with the British scene of the time. Held back by the shadows of their own personal and chemical demons they also never quite managed to take the step up to join the likes of The Grateful Dead’s or Grand Funk Railroads of the time even in their home territory. Formed in 1967 the band were put together by Randy Wolfe (California) with stepfather Ed Cassidy on drums but they always struggled to keep up the momentum during a career littered with break ups and reunions despite mixing in the same circles as Hendrix and The Mamas & The Papas. The hopes of another Spirit reunion crashed down in 1997 when Randy tragically drowned while trying to save his son (who survived) from rip tides while swimming near their home in Hawaii.

This latest Sunrise & Salvation set from Cherry Red brings together their five albums recorded for Mercury Records during the 70’s and 80’s remastered from the original tapes along with an additional 102 previously unreleased live, studio and demo tracks from that same period all wrapped up in eight CD clamshell box compiled and annotated by Mick Skidmore (Spirit archivist).

The opening disc contains the first three sides of the original double vinyl release of Spirit Of ‘76. This was the bands sixth album but their first on the Mercury label. It’s western state sound sums up the band at this stage. Opening with the patriotic pairing of “America The Beautiful/The Times They Are A Changing” it places the band well and truly in an era of Dylan, Steely Dan and the Grateful Dead. As ever tipping the hat to his Hendrix associations California takes on both ‘Like A Rolling Stone’ and ‘Hey Joe’ as well as closing the album with his take on ‘The Star Spangled Banner’ (on disc two). Made up of many short pieces with themes running through (‘Tampa Jam’ parts 1-2-3 and ‘Jack Bond’ Part 1-2) as well as showcasing other originals it also contains a funky cover of Rufus Thomas’s ‘Walking The Dog’.

Completing the remainder of Spirit Of ‘76 with the spacey, Urantia, and Atlanta Rhythm Section style ‘Guide Me’ as well as the aforementioned Hey Joe and Jack Bond Part Two the original album closes out on the same patriotic note with which it opened on ‘Star Spangled Banner’, although not as wild a Hendrix’s version this take has an all-American charm of its own. Overall Spirit Of ‘76 shows the scope of Spirit and proves that after eight years together they are still developing as a band. The real interest on disc two comes from the bonus material. Not so much the alternate versions of the album tracks ‘Guide Me’, ‘Joker On The Run’ and ‘America The Beautiful/The Times They Are A Changing’ but with the live tracks recorded in Cleveland in the run up to the release of the sixth album. Spirit have always come across as a much heavier proposition live than in the confines of the studio and this is borne out from the get-go with their cover of Gladys Knights ‘I’ve Got To Use My Imagination’. Following two tracks pulled from Twelve Dreams Of Dr. Sardonicus, the ever popular ‘Nature’s Way’ and ‘Mr. Skin’ the set becomes more Spirit Of ‘76 focused adding a little extra punch to the studio versions.

Disc three of the set contains the bands next two albums. Son Of Spirit was released the same year as its predecessor and included tracks taken from the same sessions along with others which were basically California solo efforts. This saw Spirit moving in a more commercial/mainstream direction. Now down to a trio of California/ Cassidy and bass player Barry Keene, with tracks like the single ‘Holy Man’/Looking Into The Darkness’, the trippy ‘Magic Fairy Princess’ and a cover of Lennon/McCartney’s ‘Yesterday’ it still didn’t light any fires and failed to chart. The following years Farther Along was billed as the first reunion album with the returning John Locke on Keys and Mark Andes on Bass alongside brother Matt Andes on guitar. Alongside the main band California and Cassidy added an array of other musical talent to take the music back to an earlier time reminiscent of third album Clear. The title track bounces along on acoustic guitars as does ‘Colossus’ and ‘Don’t Lock Up Your Door’ and despite the abundance of instrumentation available the album revolves around a much more chilled vibe whether it be with the saxophone led ‘Stoney Night’, the percussive calypso of ‘Pineapple’ or the full orchestral rework of Dr. Sardonicus track ‘Nature’s Way’. It also features ‘Mega Star’ a piano based song which points towards the sci-fi inspired things to come. The bonus tracks consist of additional lo-fi tunes taken from the same session along with a live take of Further Along’s title track.

In 1977 Future Games went to a more concept approach (Potato Land was originally conceived in 72/73 but shelved until 1981) with a loose sci-fi theme running through the album’s tracks are linked by short pieces taken from TV/film recordings (Star Trek etc.). Subtitled A Magical Kahauna Dream although it was released under the Spirit banner it really was a Randy California solo release with him playing most of the instruments besides the drums. A little more outside the box than previous albums Kim Foley played his part in this on songs like ‘Bionic Unit’ and ‘Buried In My Brain’ which features a riff straight off of Pink Floyd’s The Wall (that album wouldn’t be released for another two years) that reprises on ‘Gorn Attack’ and ‘The Journey Of Nomad’. Also included is California’s take on ‘All Along The Watchtower’ a song which continued his Hendrix fascination and would feature heavily in the Spirit live set until the end. With its short sharp tracks (only one over four minutes) and linking wordplay Future Games feels less dated than previous work from the band. It also has similarities to the Potato Land album which would follow in 1981 on track like ‘Freakout Frog’ and ‘Monkey See Monkey Do’. Once again the bonus tracks consist of Alternate versions which add little to the collection unless you are a diehard fan and additional tracks from the album sessions which really are rather good especially ‘Hollywood Dreams’ and ‘Love Charged’ with their rockier edge but they wouldn’t have sat comfortably among the other tracks on this album.

Following the delayed release of the Potato Land album released in 1981 on Rhino in the USA and Beggars Banquet in the UK it took another three years before they returned to Mercury for The Thirteenth Dream. Released in the US as Spirit Of ‘84 it saw the band taking a much more melodic rock approach ‘Black Satin Nights’ and ‘1984’ being prime examples of this. It really moved the band into the new decade even though it did include four re-recorded tracks, ‘Mr. Skin’ and ‘Nature’s Way’ from Dr. Sardonicus, the excellent instrumental ‘Elijah’ from their debut Spirit album as well as a pumped up take on the bands biggest hit ‘I Got A Line On You’ from 1968’s The Family That Plays Together second album. It also displayed a great deal of diversity with ‘Fresh Garbage’ and ‘All Over The World’ laced with Latin/Santana Rhythms and ‘Rasta Girl In A Ferrari’s mock reggae as well as the Beach Boys inspired vocal harmonies of ‘Give Me Your Number’. The extra live track here are taken from a 1986 show in Detroit and include great covers of ‘All Along The Watchtower’ and The Nashville Teens hit ‘Tobacco Road’. Once again these live tracks prove that the stage was the perfect place for the bands talents particularly when it came to California’s shredding skills.

Moving very much into completist territory disc six pulls together the remnants of the recordings of Spirit Of ‘76 and Son Of Spirit between 1974 and 1975. Mostly low definition out takes and sketches the only shining lights are when California assaults his six string on ‘I’ve Got To Use My Imagination’ or takes the singer songwriter approach on ‘Jimmy Brown’, ‘Holy Man’, ‘Maybe You’ll Find’ or ‘Kathy’s Song’ but on the whole too much drum machine and not enough substance. We are also treated to solo demos which although very much a work in progress also shows his proficiency as an acoustic troubadour.

For me disc seven is the real treasure of this collection. Containing the previously unreleased show from the Armadillo Headquarters in Austin, Texas on 19th June 1975. It shows the band at the height of their powers. Fair enough the recording quality is that of a reasonable bootleg with the drums to high in the mix and the bass a little muddy but turn it up loud and remember this was over 45 years ago. All the big covers are here from the electrifying opener ‘Going Down’ through ‘All Along The Watchtower’, ‘Mr. Tambourine Man’ and ‘I’ve Got A Line On You’ (of course). Along with these are rip roaring versions of ‘Austin Jam’ and another cover ‘I’ve Got To Use My Imagination’ plus the boogie shuffle of ‘Working In Austin’ the set closes out in great style with the ‘On The Road Again / Star Spangled Banner/ On The Road Again/ Austin Jam’ medley.

Once again disc eight is one for the completists as it contains a straight demo run through of the Future Games album and if you have the finished album why do you need this? What you do need however are the eight tracks recorded live at The Agora, Cleveland in 1975. Once again Spirit seem at home on stage with California tearing through opener ‘Downer’ before taking on Jimi with his more laid back version of ‘Like A Rolling Stone’. The live recording quality here is the best of the set giving ‘Mr. Skin’, ‘Old Blue’, ‘All The Same’ and ‘I’ve Got A Line’ a more listener friendly sound than their Armadillo Headquarters counterparts. I’m not always a fan of drum solos but listen out for Cassady’s colossal solo during ‘All The Same’ which is a highlight of this set. Personally I prefer the rawness of disc seven but many won’t.

For those yet to discover the joys of Spirit you are best served by picking up a copy of Twelve Dreams Of Dr. Sardonicus or The Adventures Of Kaptain Kopter & Commander Cassidy In Potato Land but if you want to see the full capabilities of the band or are a completest you will be more than happy with the hidden gems found within this set. I will always have a soft spot for Spirit because of their gig at Friars, Aylesbury in 1981 where I happened across one of my all-time favourite bands (Marillion) who were supporting on that particular night… and for that I will be eternally grateful…and Spirit were pretty good too.

1. America The Beautiful/The Times They Are A Changing

3. Lady Of The Lakes

8. Joker On The Run (Alternate Version)

9. America The Beautiful/The Times They Are A Changing (Alternate Version)*

21. The Journey Of Nomad

24. Would You Believe (Alternate Version)

4. Rasta Girl In A Ferrari*

8. All Over The World

2. I’ve Got To Use My Imagination

7. We Are One People

6. All Along The Watchtower*

22. Would You Believe (Reprise) 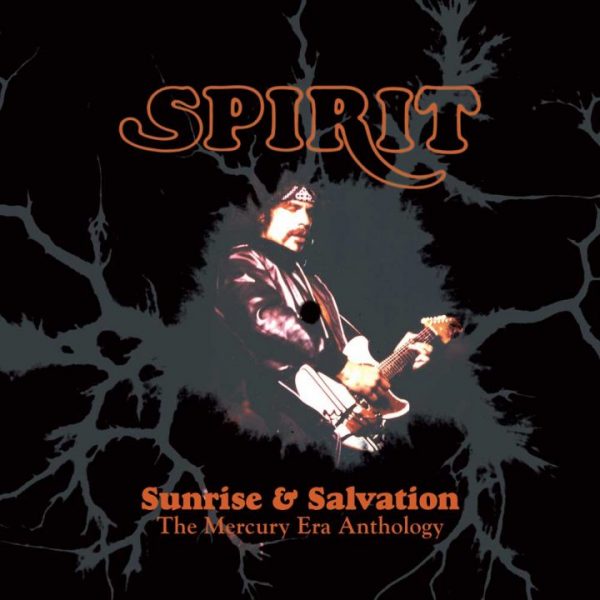