Reviewed by Brian McGowan and released by Spinefarm Records June 2018.

There’s been a flurry of releases on the UK’s Spinefarm Records these last few months. Thanks to the label’s A&R guru, Dante Bonutto, the label has widened its field of fire, taking aim at southern rock and country, as well as the usual, metal shaped suspects.

Three albums then, one of each provenance reviewed over next three nights.

Like Country, Southern rock is based on tradition, heritage. There’s a lyrical focus common to much of the material in both genres – the pride and self reliance of the blue collar workin’ man, livin’ outside the law, exaltation of strong liquor and other such maverick principles.

Hogjaw wade waist deep into swampy Southern rock with Way Down Yonder, incredibly their 8th album, and its gritty veracity in upholding those unstated red lines comes alive fast, particularly in among the clean pickin’ and thunderous riffin’ of ‘To Hell With The Rest’, and the hard as nails archetypal southern fried rock of the title track.

Highlight, ‘North Carolina Way’ slows the pace down to an irresistible groove, and is surprisingly hermetic. Guitars, bass and drums mesh to the extent that no extraneous noise escapes their gravitational pull, pulling back the sizzling lead guitar as it snakes out of their watertight sound system.

‘Brown Water’ ticks the whiskey and wild, wild woman box, but ‘Dark Horse’ is the album’s pivotal track. Driven by sparse, dramatic chords it sings of a wanted man, pursuit and the certainty of death, but not of regret and ultimately perhaps, not of redemption either … the album in microcosm. 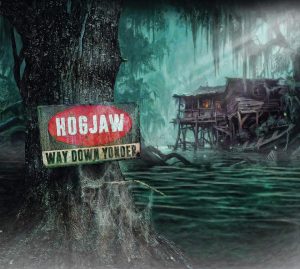