Brazil has a rich heritage in extreme metal and bands like Sarcofago, Mutilator, Holocausto and, of course, Sepultura cast a long shadow. Stepping up to claim the throne are thrash band Speedkiller who are about to unleash their debut album Midnight Vampire which is sure to add their name to Brazil’s metal roll of honour.

An atmospheric introduction sets the scene as horses hooves trample on cobbled streets while the cry of a lonesome crow is answered by a howling wolf. Set against the backdrop of haunting church organ Speedkiller lure the listener into their nocturnal, cinematic world as they piece together a musical mosaic. The spell is abruptly broken by opener proper ‘Nightspell’, a song that’s ushered in by buzzsaw guitars cutting through solid steel. The vocals are embedded deep in the mix, which always adds a sinister edge, while the drums pound like a hammer on an anvil. Cold and frostbitten the rhythm guitar is a razor-sharp guillotine blade that rises and scythes while the lead scrawls a sound that’s akin to a planchette moving frenetically over an Ouija board.

The gaps between tracks is kept to an absolute minimum as ‘Suicide Hell’ explodes on sight and releases shards in all directions as the guitars run amok and the circular drums down spiral to the depths of Dante’s Inferno. There’s a definite Teutonic feel to Midnight Vampire with ‘Suicide Hell’ sounding like the illegitimate love child of Kreator and Destruction as the neo-classical flourishes add a grandiose feel. The imaginatively titled Spellcaster has a vocal style that often veers into black metal territory as his tortured cries emanate as if from the very darkest recesses of hades.

Doom thrash? Hell yeah! and that’s exactly what you get from the crushing ‘Shadow People’. With a riff from which Tony Iommi’s dreams are made it rises like Atlantis from the oceans depths and proceeds to stomp around the room with the force of an angry giant. It has a feeling of latter day Death and throughout there’s that ever present chunky riff which (to paraphrase George Orwell) stamps eternally on a human face. ‘Midnight Vampire’ is the blistering title track and goes straight for the jugular and refuses to let go. The sludgy nature of ‘Shadow People’ only serves to highlight ‘Midnight Vampire’s rumbustious nature and Speedkiller whip up a storm with this feisty thrasher.

Arriving with the force of the Light Brigade charging into the fray ‘Valley Of Death’ finds the band pressing down hard on the pedal and there’s no let up or slowing down just a neck-snapping, blackened thrash attack. Think Exciter or Razor (or any of those early pioneers) and you’ll have something approaching the raw excitement that ‘Valley Of Death’ generates. Building up an almost unbearable tension the intro to ‘Circles Of Blood’ finally snaps and from thereon it’s a boulder rolling uncontrollably down a hill and crushing all in its path. It’s a closer very much in the vein of ‘Battery’ or ‘Hook In Mouth’ and draws a clear line in the sand as nothing could follow its bombastic nature.

At just 27 minutes Midnight Vampire is a fairly short album but it’s an addictive slab of metal that should leave even the most thirsty bloodsucker sated. 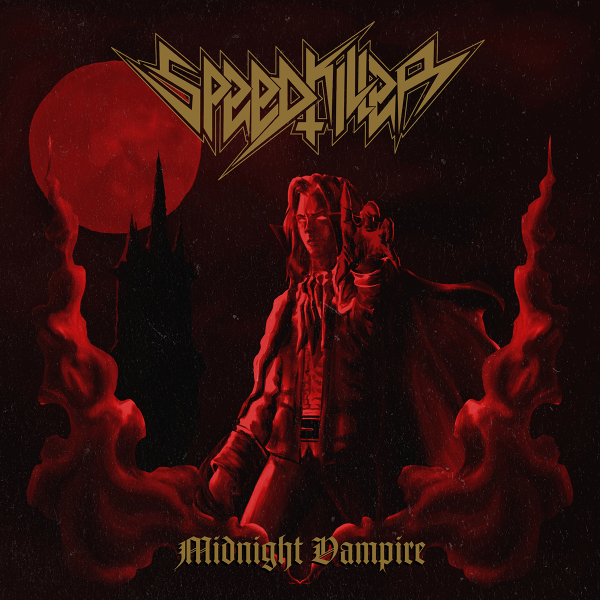