Max Cavalera may be one of metal’s best loved frontmen but he shows more than enough on Soulfly’s new album Savages to illustrate that he’s as angry and agitated with the world as ever. It tells you all you need to know about Cavalera’s place in the metaphorical metal hall of fame that this latest album – Soulfly’s ninth – features his 21-year-old son Zyon on the drums. To show how things roll full circle older Sepultura fans will recall that the then unborn Zyon’s inutero heartbeat actually appeared on the classic Chaos AD album.

Without wishing to open up all wounds, it’s worth reminding ourselves that Max’s Soulfly chapter has now been lasting longer than his Sepultura one. As if continuing to fight wars with Soulfly isn’t challenging enough, Max once again has a side project up his sleeve just in case he finds himself with some downtime in between recording, writing his autobiography and world tours. He’s done this kind of thing before of course with his brother Igor in the Cavalera Conspiracy and now he’s at it again having locked dreads with Greg Puciato of The Dillinger Escape Plan, Troy Sanders of Mastodon and former Mars Volta drummer Dave Elitch. Killer Be Killed are said to be working on a debut release at present, with Nuclear Blast behind this ‘supergroup’, Cavalera having worked with the German label for a number of years now through Soulfly.

It opens with the lull before the storm, a dissonant siren wailing in the distance, before the band kick into ‘Bloodshed’, a rhythmic Soulfly sledgehammer. ‘Cannibal Holocaust’ is as its title suggests a furious fist-pumping assault although the third track ‘Fallen’ is every bit as incendiary with Max opening up with classic Soulfly understatement: “This is the end of the world as we know it!” Although Soulfly have fans across the planet the sprawling seven-minute juggernaut ‘Ayatollah of Rock ‘n’ Rolla’ may not receive too much air play in some of the less enlightened corners of the globe.

Mainstay guitarist Marc Rizzo now has the formidable figure of bearded bassist Tony Campos alongside him and the two older hands provide a solid stringed buffer in support of the 21-year-old Zyon who has taken over the hotseat (literally) from David Kinkade. Soulfly have always been happy to welcome the occasional guest vocalist and on the track ‘KCS’ that privilege is bestowed to Mitch Harris, guitarist with Midlands grind gods Napalm Death. ‘El Comegente’ is an eight-minute deep thruster. With Max singing in Portuguese this is possibly the track to carry the more tribal elements favoured by Soulfly (and of course Sepultura) down the years. Savages closes with ‘Soulfliktion’, a rabid beast of a track that more than lives up to the album’s title. While perhaps lacking a standout track in the manner of previous releases such as Conquer or Omen, this remains an album that any Soulfly follower would want to add to their collection.

Keep an eye out for Max’s autobiography too in the New Year – by all accounts it’s a gripping read! 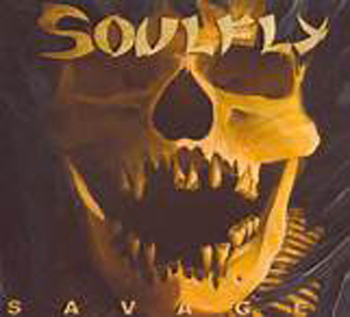