Jeff Scott Soto is something of a vocal chameleon. Cliché yes, but true nevertheless. He’s sung for Malmsteen’s band, he’s fronted Journey, he’s funked it up with Talisman and latterly he schmoozed up against mainstream success with the Trans Siberian Orchestra. He’s released solo albums too. His music has been shunted down musical side streets and pushed into dead ends that first seemed like the highway to heaven. In short, he’s seen the rainbow, but never found the pot of gold. Maybe that’s why Into The Vertigo is full of ire. JSS is clearly pissed off at the world in general, but also one or two individuals specifically. And, as we all know, the Heavy/Power variety is the prescribed Metal of choice for music fuelled by anger.

Guests include Jason (Saigon Kick) Bieler, Joel (Nightranger) Hoekstra and Casey (Kamelot) Grillo, and their influences are not difficult to discern here. Bieler frequently unhitched himself from Rock/Metal convention with Saigon Kick, and you get the same strong sense of emotional dislocation from ‘Karma’s Kiss’ that you got from his band’s The Lizard and Devil In The Details‘ albums. Hoekstra’s influence too can be heard, on the title track, Into The Vertigo, a dark, forbidding Melodic hard Rock song, a valiant attempt at rebooting the sound of Classic Rock for contemporary critics.

Throughout the album, thundering, metallised riffs fire booming broadsides of razor sharp lyrics at fraught situations, strongly featuring women who done him wrong. He sifts through the fragments of his relationships like he’s handling the still hot shrapnel of open warfare, where guitar, bass and drums are the chugging, pounding rhythm of heavy artillery, a soundtrack to a life lived on the edge.

The music dramatically underlines the undeniable schadenfreude of ‘The Fall’, and is sometimes hypnotically elaborate, as on ‘Narcissistically Yours’ and the album’s 9-minute piece de resistance, ‘End Of Days’. At others it aims for a primitive, guttural impact – ‘Wrath’, ‘Trance’ – with barbed axework coiling round pummeling riffs, and only the occasional splash of tuneful colour in the mix…signifying anger contained and controlled.

Listening to someone being angry can of course be stultifyingly dull. Soto make sure, for the most part, that they have our attention, even if it’s all distractingly derivative at times. Maybe the guests weren’t such a good idea after all. 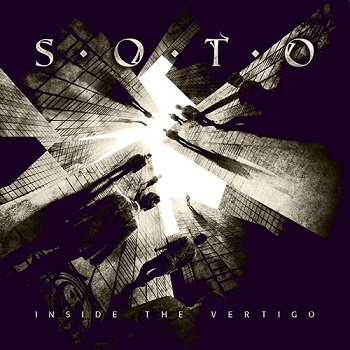