The term supergroup has never been more appropriate than when applied to the five virtuosos who comprise Sons Of Apollo. Getting a talented fusion of musicians to gel is no easy task, with egos involved the cocktail can often be too volatile, yet here the blend is just right. Operating as a “proper” band Sons Of Apollo are in it for the long haul and while their debut (2017s Psychotic Symphony) was a solid effort their sophomore album MMXX is a vast improvement and shows a growth and progression born from some solid touring.

Cold and brittle, yet inviting, the unsettling, spiky tone of opener ‘Goodbye Divinity’ immediately drew me in. It’s razor sharp fishing line with which the band reel you into their ethereal world before they shock you back to reality with thundering drums. A chugging riff, punctuated by squeals, powers the song forward before Jeff Scott Soto appears, like an apparition made solid, to overlay his soulful vocals. Tailor made as an album opener it’s a statement of intent, a song about finding strength in adversity, with each member given room to solo and demonstrate a little of their style. The same spiky tone is used as an outro and it’s a haunting motif that’ll haunt you for days. There’s no time to hang around as the nocturnal ‘Wither To Black’ follows on which the guitars and drums combine to create a pummelling riff over which keyboard maestro Derek Sherinian swirls a cool retro Hammond organ sound. It’s a real boxers song: nimble on its feet, rocking side to side and throwing quick jabs it’s hard not to get swept along with the bands enthusiasm.

With an almost industrial feel ‘Asphyxiation’ finds Mike Portnoy firing his drums with metronomic precision while Ron “Bumblefoot” Thal makes his guitar ring like police sirens. Like Fear Factory tusselling with Life of Agony the track has a contemporary edge as Jeff’s slightly distorted vocals flit from speaker to speaker creating a feeling of discombobulation.  This stands in marked contrast with ‘Desolate July’ which opens with a tolling bell and some sorrowful keys. Above float Jeff’s vocals, ghostlike above a misty lake, until a riff of monolithic proportions suddenly breaks the spell. Like latter day Pink Floyd or Hogarth-era Marillion MMXXis very cinematic as this five-man assemble combine to create vivid soundscapes.

While musical comparisons can be drawn as points of reference Sons Of Apollo have a unique sound. It works precisely because no member has disowned their past (and nor should they) with each bringing something of their history to the table and, much more than the sum of parts, they create a new monster. Cascading keys, slightly off kilter, as if tumbling down stairs, serve as an introduction to ‘King Of Delusion’. Creating a feeling of someone not quite at home the sonic shifts, weird time signatures and time changes only add to this perception. The production is a real boon and reminds me of Metallica’s Black Album insofar as it’s afforded a huge cavernous sound (although MMXX is greater in scope) and it’s another tool which the band to utilise. Swirling and ululating and full of descending scales ‘Fall To Ascend’ is akin to a musical whirlwind that sweeps up all its path in a joyful virtuosity.

Middle Eastern flourishes pepper the chunky ‘Resurrection Day’ as Ron Thal and Billy Sheehan trade solos, each good naturedly jockeying for pole position, with Billy attacking his bass like a six stringer and each egging the other onto more dizzying displays of musicianship. At almost 16 minutes album closer ‘New World Today’ is the sound of a band confidently flexing their musical muscles. Sons Of Apollo are one of those rare bands who seem to alter the very fabric of time whereby an elongated epic seems to pass in the blink of an eye. A bright, ethereal guitar solo opens the song and shimmers with an otherworldly quality before the keys pay homage to bands like Yes and U.K. then a heavy metal riff gatecrashes the party to drive the song forward and then evolves into a thrashy section. A musical maze-melding juxtaposition, part of the joy derived from MMXX is not knowing in which direction the band will head, the only safe bet is a blistering solo as Billy, Derek and Ron step forward in turn for a moment in the spotlight. Building towards a big finale ensures ‘New World Today’, and the album, ends on a suitably grandiose tone.

Overcoming the ‘difficult second album syndrome’ with ease, seemingly happy in each other’s company and playing to their strengths it seems the sky’s the limit for Sons Of Apollo. 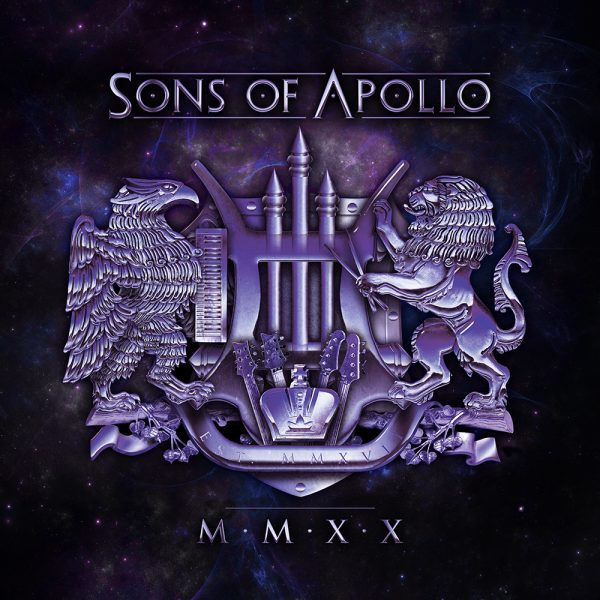