A cause for celebration for those in the know. UK post-rockers (although this is far too easy a label for the band) Sons Of Alpha Centauri return with ‘Push’, their third studio album. ‘Push’ sees a departure from their usual instrumental sound with the addition of Jonah Matranga (Far, Gratitude) on vocals throughout. Drummer Mitch Wheeler (Will Haven) has also been added to the line up.

SOAC aren’t a band to rush things, although there has been a veritable flurry of activity of late. Formed in 2001, they didn’t release a debut album until 2007. The brilliant follow up, ‘Continuum’ didn’t surface until a decade later. In the meantime, however, they have collaborated extensively and released several split records (notably with Karma To Burn) and also formed the brilliant Yawning Sons, with Gary Arce (Yawning Man).

Their ear for a perfect collaborator has certainly not dulled. Wheeler’s vocals fit perfectly here, the emotion and anguish in his performances pushing the riffs forward to greater depth and intensity.

Oh yeah, riffs. There are a lot of them here and very heavy they are too. And precise, and brutal, oh, and machine-crafted heavy. The bands sound has shifted like a particularly heavy tectonic plate from Post Rock to what can only be described as Post Hardcore. Well, not ‘only’, there are probably lot’s of ways to describe this glorious noise but that was the one that came to mind first. There are also still moments of Post Rock groove and repetition, plus drones, and out-n-out metal and alt-metal – it’s all here and it’s all good.

A scratchy drone intro to ‘Get The Guns’ kicks things off before charging into a bigger, menacing riff, which continues to grow in stature and power throughout the song before riffing out in a thrillingly brutal finish. And that kind of sets the tone, songs are exercises in structure and the slow building of intensity.

Angular, dissonant riffs drill into your skull. Brute metallic chugs slow down before building up a new head of steam. There’s no let up, songs are propelled forwards by the triphammer drums of Wheeler while Matranga plead and howls with an air of savage nihilism. ‘Saturn’ is stunning – it’s intro is part Ambient, part Doom. Menace and tension build before dropping out into a dreamy soundscape…briefly. Then it’s diamond-cut guitars roaring majestically into an epic finish.

‘Dark Night’ hits a mammoth groove, sounding almost like Jeff Buckley fronting a Hardcore band. SOAC’s ear for melody runs throughout this album and is never more keenly felt than here, it’s dark, emotive and strangely affirmative. Oh and it ends on a frankly brutal groove. The album draws the curtain with the oozing, Drone-y sombre note of ‘Own’.

As ever, Sons Of Alpha Centauri don’t disappoint. They’re an under-the-radar treasure. Ever so slightly mysterious, very rarely do they plav live and yet are one of the most interesting, creative and consistently challenging and brilliant bands we have right now. Who knows how long we’ll have to wait for the next album, and what it will be (or who it will be with!), but for now, just immerse yourself in ‘Push’.

Released by Exile On Mainstream Records on 27 August 2021 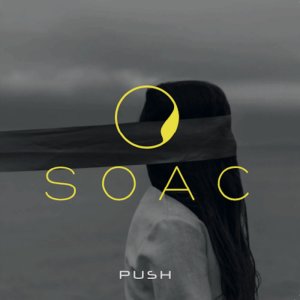