For most hairy (or not), leather clad rock dudes (myself included), the world of the remix album is a mystery. How is it formed…and why? Multiple slightly varied versions of the same song – occasionally with slightly different titles – is a head-scratching proposition. What’s wrong with the original version of the song? What is the original version? Who are these people who are recklessly tampering with it? And why am I asking you?

Not so for instrumental Post-Rockers Sons Of Alpha Centauri. Formed in 2001, they themselves remain something of a mystery. Having released only 2 studio albums (with an 11 year gap between them), they have only played approximately 20 gigs. They are, however, known for their many collaborations, leaving a string of compilations and split singles in their wake and having worked with, among others, Karma To Burn and, erm, Treasure Cat. See…mysterious.

And so we come to Buried Memories, the aforementioned remix album. The band this time have collaborated with Justin (Godflesh) Broadrick and James (Khanate) Plotkin – both of whom get to twiddle the knobs (fnarr) on 3 tracks each.

First up is Broadrick, who collaborates with the band on ‘Hitmen’ – a 9 minute post rock opus (which he also mixes) which was entitled ‘Hitman’ on their 2007 debut. An electronic breath creates space for a huge bass to appear. Intensity builds as guitars slowly arrive. A drone is established before drums kick in to create a full on post rock groove. The guitars become more robust, occasionally roaring into view before the song pummels itself out into a feedback lull. The bass reasserts itself heralding some immense fuzz doom guitar before a new riff emerges, a towering riff which transforms into a humongous chug.

Tracks 2 and 3 are remixes of the same and see Broadrick take on various guises. The Jesu remix is, as you might expect, dronier…and also dreamier. It’s hugely heavy ambience. Keyboards are more to the fore and there is a vaguely 80’s/ synthwave vibe. There is less guitar and more…general noise – keys, synths, feedback, guitar crackle, it’s all here.

And here we go again for the JK Flesh Remix. Again the interest is in the differences. This time around the block things get more electronic. There is distant interference which becomes a muted guitar which merges with the general drone. It all drops out into a brief, unsettling silence. Real drums kick things into a vaguely discernible shape. Phased guitars spin recklessly before it all gets heavier, more urgent, chaotic.

Next up is Mr. Plotkin. He starts with ‘Warhero’ which eases into a gentle, almost Radiohead-esque melody before the brief, sudden arrival of a huge burst of guitar. Again, it all drifts by nicely in a post rock style. The big guitars arrive again, trampling everything underfoot. The drum pattern changes into a military march as the doom fuzz guitars become an ever present threat – coming and going as they please.

‘Remembrance’ is a short rattling, mechanoid palate cleanser before we arrive at the albums finest six and a half minutes…’SS Montgomery’, a remix of another track from their debut album. Initially it sounds like more of the same – dronery and bursts of electrical static. Then it takes a darker turn. The interference becomes more caustic, the bass more fucked up. The noise coalesces into a beat – thunderous and decayed, full of rusty shards of nailbomb noise. Howling feedback-drenched squalls of guitar circle ominously until they morph into a riff…a foul, unholy mechanical riff but a riff nonetheless. There is feedback. Flatline. The explosion subsides. Backwards looped FX play innocently in the dust and debris of ground zero.

And it’s over. What was it? An album? An EP? And why was it? Who and what are the Sons Of Alpha Centauri? Who knows – but fans of post rock and dark ambient may just enjoy this, it’s a contaminated aural treat. Don your bio mask and enjoy. 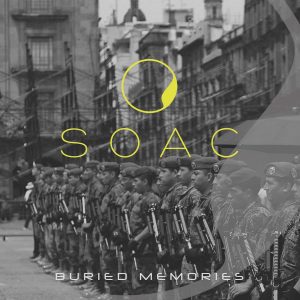