Quite how the disparate figures that collectively make up US doom quartet Somnus Throne ever work together I’m not sure. But clearly residing in New Orleans, Los Angeles and Portland has done little to quell their dedication to the swagger of Sabbath. Their debut self-titled album is almost entirely enveloped by a thick cloud of illicit swirling smoky substances that make it a feat in itself that they ever managed to retain sufficient focus to get this over the line.

Fortunately for us they did and after a mischievous Satanic intro on which spoken voices appear to be relayed backwards the blasphemous deathly décor extends seamlessly onto ‘Sadomancer’ the first of four 10-minute+ tracks. Without doubt these urchins drink from the devil’s goblet. If the spooked up Lovecraftian artwork doesn’t convince you, then the methodical call of ‘Sadomancer’ surely will. This is a death march to the precipice and Somnus Throne are in no mood to stop there.

With more rumbles than a back-street dive on a Friday night, the richly irreverent tones make for a compelling opening, leaving you instantly hungry to hear more. The spoken vocals work well, the rhythmic drive is steady but assured and the wall of riffage reveals grooves well worth hitching a ride on.

An instantly catchy hook kicks in at the start of ‘Shadow Heathen’ on which the tempo is raised a notch, as is the vocal pitch. There’s a slightly more pressing atmosphere at work although this is quickly swallowed up by some transcendental hedonism that sweeps across the soundscape as if blown over from the Indian subcontinent.

Somnus Throne don’t so much as sing about the downtrodden and dispossessed. That’s who they are. If there’s a cheap drinks hole in some off the beaten track LA backstreet, these three guys are likely to be lurking in its smog-filled shadows.

The intriguingly titled ‘Receptor Antagonist’ vibrates like a … Well let’s just say it kicks up a virtual fuzz tornado. The hypnotically played out groove is Conan-esque, working its way into your psyche before finally Somnus Throne veer off in a less thunderous direction. There is a fleeting but frenzied psychedelic breakout when they decide to throw everything they’ve got at it, but for most of the time the doomsters are happy to plod along, head lowered, in the archetypal style of Pentagram and Electric Wizard.

The final number ‘Aetheronaut – Permadose’, while not quite of Spirit Adrift proportions, is nonetheless the longest here, 14 minutes or so of neck-breaking, pelvic thrusting doom. It also sees a sudden distinct change in vocal tone, with a far gruffer bark introduced. Not sure why, but it all works well enough anyway as the LA morose mobsters sink back into their sonic swamplands.

Doom disciples are a friendly bunch and always open to welcoming new like-minded souls into their inner circle. Somnus Throne’s invitation is in the post. 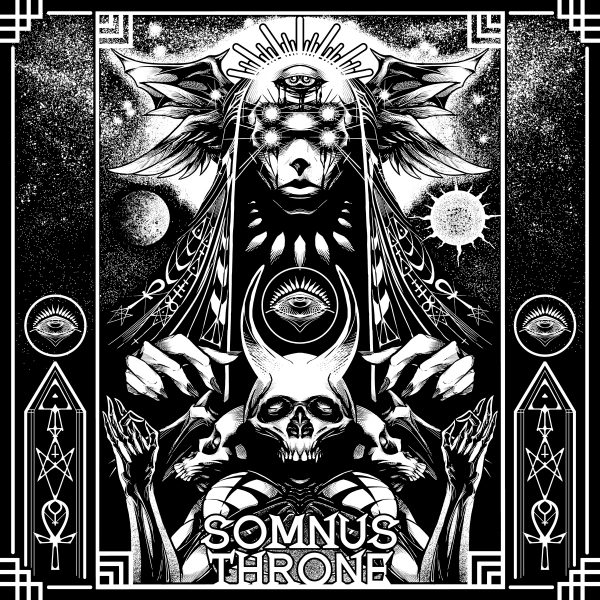