Following the success of the sold out 10th Anniversary Scars tour and the equally successful tour last year, Soil return to the UK for a second bout of dates to promote the album Whole and we popped along to The Slade Rooms to catch this ever popular bunch of Americans rock out to a packed venue.

First up though was a change in the bill; Canadian hard rock outfit Wolfborne had replaced 8 Foot Sativa. The band from Vancouver were a tight, slick outfit but failed to engage most of the crowd, including myself.  There was nothing there that made you sit up and take notice, fairly generic heavy rock.

So hopefully, veteran rebel rousers Hed PE would raise the bar and temperature. Always different, always entertaining. Their brand of hip hop/metal crossover may seem dated to some, but they still evoke some powerful thoughts with their insightful lyrics and outspoken ideas.

Frontman Jahred bounces onto stage resplendent in camo gear and face mask and proceeds to thoroughly entertain us, he manages to look menacing, but mischievous at the same time, a glare followed by a cheeky grin. These outsiders are never scared to mix it up, as you will find out if you check out their latest release Evolution. A packed room is hopping to the hip and moshing to the metal, with a smidgen of punk thrown in and to bring the mood down to a more chilled level we get some groovy reggae thrown in, including a small pastiche of The Specials anthemic song ‘Ghost Town’. 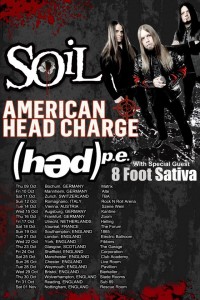 With the room rammed and well and truly warmed up now, the enigma that is American Head Charge take to the stage. I say enigma, because this band that has had very little recorded output still manages to draw a significant crowd of loyal fans. Again a band that set out to put their own stamp on the world of metal, they bludgeon us with a aggressive mix of Hardcore and Nu-metal that still sounds fresh. They are melodic but still manage to get the crowd into a frenzy, producing one of the fiercest mosh pits I’ve witnessed in the close confines of the Slade Rooms. The frenzy reaches fever pitch with ‘Just So You Know’; a song that sums up AHC to a tee.

Well, 2 hits and 1 miss so far and with Soil to come hopes and expectations are high, following their last two hugely successful tours. They didn’t disappoint. With Ryan McCombs back in the fold for a couple of years now, they have found their groove again. Sceptics may have thought that the “Scars re visited” tour was just a nostalgia trip with the band offering nothing new, but last year’s release of Whole has proved that the Chicago based rockers still have a lot of mileage left and a lot of juicy material to pass onto us. New classics are emerging such as ‘The Hate Song’ and ‘Shine On’ that sit alongside and compliment the older tunes like ‘Two Skins’, ‘The One’ and of course ‘Halo’.

Ryan McCombs is one the most under rated vocalists/frontmen in Metal; he revels being in the limelight and loves interacting with the crowd, especially with that modern classic ‘Halo’ and I think this is one of the reasons they have remained so popular and although nothing is certain with regards to the future of the band, they can be certain that whatever the future brings they will always have a second home in the UK.

You can listen to Tony’s interview with Ryan here