Snowy White has led a relatively quiet, personable and successful career as a working musician. He’s navigated the pros and cons of working with Pink Floyd members, joined Thin Lizzy when they were probably at the height of their substance abuse fixation, then, like Gary Moore, surprised the pop charts by scoring a hit single with a slow blues number. The blues is where he’s most at home, and he’s lead assorted bands under his own name playing such for many a year, albums too. If I heard right, he’s now retired from touring, whether recording – in the long-term – is a different matter I’ve no idea, but this latest finds him in rude health.

As a singer, his voice tends to be present, in tune, but frail. Some might say with blues it’s only the guitar that matters. I disagree, without getting too far into the ins and outs of how slavery and social injustice put upon the American black man back in the day.

I can’t admit to having heard more than a handful of White’s solo albums, and lyrically, they perhaps, revealed little of the man himself, being mainly wrapped in loose storytelling and travelogue experience to carry the tune at hane, rather than observations on life from a personal level. I welcome being corrected here, and welcome being advised on what records to check out that prov4 otherwise, but if not, Driving On The 44 tends to make up for that.

Now, you’re not getting outright political viewpoints espoused in song here, but you are getting emotional frustration, spirited debate, a little rage, confusion and a sign of dissatisfaction with age and the times we’re living in, over more than a few of these songs. And some of it sounds deeply personal, not just being socially concerned.

That it all begins with ‘Freshwater’, the first of two instrumentals on this album tends to obscure that fact. Two keyboard players are credited, Ferry Lagendijk is one, though, surely, it’s Max Middleton on piano here? It certainly sounds like him, my loft being littered with vinyl by Jeff Beck, John Martyn and others featuring this ultra-talented keyboard player whose choice of exquisitely phrased jazz-derived chords has few equals, but I digress, and often.

Haunting but beautiful echoed piano plays out as slowly a rumbling blues with a dash of funk rhythm establishes rhyme and subtle reason to proceedings. A guitar begins to layer in figures, slowly a more forceful direction emerges, a left hand applies strident phrases on singular six string, changing tonally, but expressive all the way; it gives way to keyboards and rhythm section from time to time throughout, the tune itself taking its own sweet time, quite beautifully so. If you start an album like this, you better not disappoint anytime soon.

White himself plays bass on the record, with one Thomas White (a relative?) on drums and percussion and their slow shuffle propels ‘Longtime Blues’. The guitarist doubles guitars, reminiscent of both the harmony approach of his time in Lizzy, and of three-strong attack of Fleetwood Mac, whose Peter Green was a friend and on whose records he played. Somewhat nonchalantly, if White is not simply performing and writing in character for this album, he reveals himself as an individual who veers towards being of the glass half-empty disposition, while without becoming overtly mournful, admitting “I had such a good time in the firing line”.

Depression, if he indeed has suffered from such, isn’t something we’ve talked openly about until recent times, and any previous encounters he’s kept close to his chest. His guitar playing on the other hand is expressive throughout.

Chords chink down on the funky upbeat groove of ‘Down In The Dark’, a cheeky lyrical guitar refrain pulling in. Word-wise, he reveals himself strait-laced in the main, old school politicised, and right fed-up with those he perceives getting away with murder (not literally) on the one hand and anyone telling him how to live his own life on the other. The overall effect is as if Rogers Waters were lacing venom into a Squeeze, Ace or Blockheads tune… Save we get some extraordinary solos filtering in, a beautiful slight echoed one initially, a more linearly expressed later and a bass workout thrown in for good measure, plenty of time changes too. Repeated listens reward the listener, not least because you can imagine remixes with dancefloor beats and dreamy soundscapes and this going over large with some young gobby-mouthed lout miming along on a video.

Title track ‘Driving On The 44’ is a slide-slipping, more straight-ahead blues rock. Subtle organ passes intermix between a Dire Straits style guitar chord ride, whereas, again, when on soloing six string wise they’re high on melody while feeling they’ve got something to say and being determined to put over its message musically. One of rock’s perennial narratives about life on the road, White verbalises how the freeways and tour dates keep beckoning, while golden opportunities within reach remain one stepped removed.

‘Blues 22’ is the reasoned conversation of a middle-aged man propping up the bar (at least in my opinion). He’s telling you he’s been a good-egg pretty much all his life, but now even when he wants to pay someone a compliment (specifically his “woman”) he’s castigated ‘til the cows come home, with a list of litanies as long as your arm. Amusingly, as with my pub rock references to some of ‘Down In The Dark’, White practically talks this song through, veering into street poetry patter. After having expressed his frustration for a verse or two, he says: “Just going to play my guitar… here it comes!” He whacks it up to 11 giving it his all, your ears pricking up doubly so. It’s a long song, taking you down dark alleys but some brightly lit side-streets too.

Drumming kicks hard, brushes wafting across the snare like fine sandpaper on the rugged blues rock of ‘Ain’t No Secret’. “I ain’t always been a good man, but it ain’t no secret,” White exclaims in this number where his greater reaches out for notes others wouldn’t bother, reaching them sharp and clearly, inspired, then at turned snottily arrogant, alongside inspired assorted subtle keyboard touches throughout. Possibly the most basic number on the album but solid and profound nonetheless.

Piano and acoustic guitar lead the way in for ‘Keep On Flying’. Character sketches of assorted individuals’ dreams and ambitions are exposed, and despite lines like “Follow your heart, know who you are deep inside,” reading a little whimsical on paper, in the context of the song they come across as stoic moralism. An initial guitar solo pierces through then retreats, returning later becoming more profound, brave if you will, as it soars to conclusion.

An organ delivers the ska beat blues of ‘One Man Girl’, and once more we’re in that Mod/pub rock/Neanderthal-Brit pop straight cool talking vibe. It’s a feel-good number with Hawaiian styled slide solo, piano backing, then both coming back for more following another verse, albeit jazzier so on the old Joanna and strutting out down the high end of the neck of the guitar. Drums crack down hard again on the walking blues of ‘Slinky Too’. It’s the other album instrumental, and despite being nothing new the playing – from all concerned – will put a cheeky smile on your face without the need of a drag on a spliff.

Finally, comes ‘Lady Luck (So Mean To Me)’ that I gather’s been released as a single. It strolls casually towards your ears across warn funky chords, with a razor-edged slide infiltrating coyly. Once more the contradictory quibbles of modern life are espoused in song, and his solos carry the message further – The first like a seductive dance performed by the female enchantress mooted over in the previous verse, and If indeed fate casts a melancholy cloud over Snowy White’s mood, he’s the wherewithal to not to let it be all encompassing, as that second wah-wah fixated extemporisation most determinedly shows this.

Subtle consummately inspired guitar work, blues based but with unexpected Latin flavours and jazz-spliced moods. If that’s all you get from this album, put in on again and actually listen. Here within are songs that reflect midlife crises and frustrating contradictory times we live in, understatedly so, whether they be character driven or personal. I truly enjoyed Driving On The 44, and I’m one of life’s pedestrians. 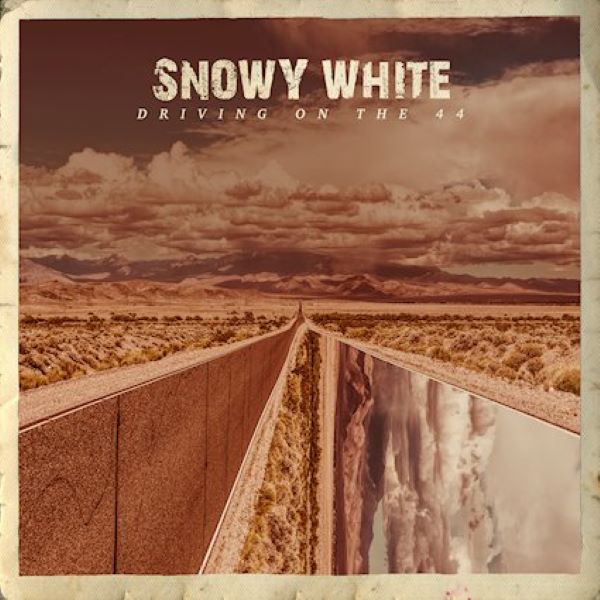