Adrian Smith and Richie Kotzen return promptly following their well-received debut album together. A collaborative venture where guitar playing, singing and song-writing were shared in a cohesive mix of fiery hardened rock that was both explorative and funky, without straying too far off the beaten track.

Better Days features two brand new tracks, and another couple we presume left in the pot from last time round. Opening track ‘Better Days’ itself is one of the new ones. Based on a riff Smith played Kotzen on his return to Los Angles, after lockdown, they then, in Kotzen’s words: “Came up with a melody for the chorus together, pretty much working to the same formula we used when writing the S/K album, bouncing ideas off each other.”

That riff tumbles and wriggles, and like a mole burrowing through your garden it sounds familiar but escapes direct comparisons. Slow and assured, as Smith himself notes the songs is “heavy but melodic”, hitting high notes vocals in the bridge through to chorus with soulful refrains and lead guitar work increasingly makes itself at home without spoiling the flow. It’s a song of regret, those better days were yesterdays and like that riff you listen, digging deep, trying to get to the heart of the reason why.

Okay, picture it’s the mid-seventies but anger-management issues and drug interventions have already become the norm. Blackmore’s walked off stage at the California Jam, fired up by Deep Purple’s response and now wants to draw on the strengths of the two new guys without allowing future excesses take hold. We get a mother of a song that blasts out with the ferocity of Burn, envelopes a riff that would’ve added another rocker to Stormbringer, yet somehow allows for the heavy funk of Come Taste The Band to sit comfortably within the mix.

This is ‘Got A Hold On Me’ and their guitars race and scream with wild but far-ranging purpose from the get-go, subsiding to allow deep throaty vocals exchanged by both singers before swinging out in vocal harmony. Yes, part of the solo is a variation on a Blackmore line or two, but it soon smoulders beyond that. This one most definitely got this aging old sod’s blood pressure up.

‘Hate And Love’ remoulds The Winery Dogs’ ‘Captain Love’ into a bruised and battered, down but not out hard and mean but well grooved strut. And then, with ‘Rise Again’, the guitars take flight one final time, zipping here, there and practically everywhere with long instrumental passages of progressive rock fluidity while Smith delivers a near monologue, then is joined by Kotzen on the chorus. You might point to Satriani and Vai as forerunners of this kind of thing, but Frank Zappa’s more your man, and with a touch of cockney thrown in on the sides you can even point a finger at Blur. I can see why this track would’ve been too off-the-wall to suit their debut album, but here on this EP it suits the diversity present throughout.

Even where lyrics veer into forlorn reminiscing across these four tracks there’s the feeling that there was fun had while making the actual recordings. Once more, they don’t sound in competition and complement each other’s talents well, and this brief outing shows there’s still fertile territory for them to explore together creatively. 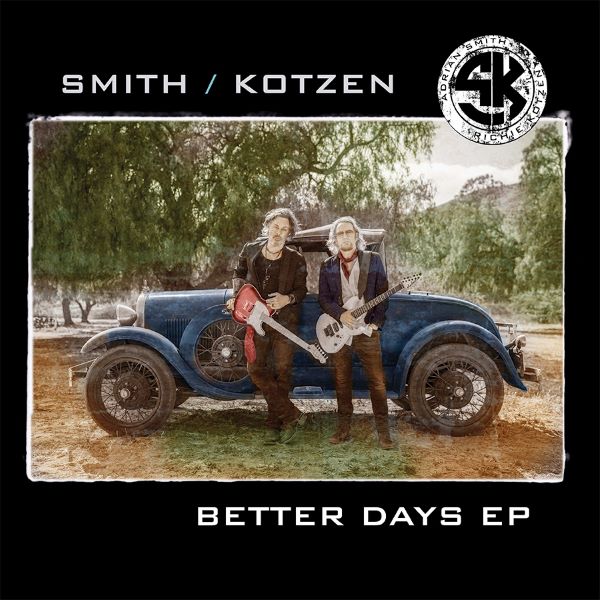