Midlands Rocks have headed darn sarf to the big smoke for what promises to be a blistering night of metal. Yes, the aural beast that is the Prepare For Hell 2015 tour has rolled into town for the London date, and suffice to say I am beside myself with excitement. Unfortunately, the anticipation that has been bubbling deep within me for the past week is rudely extinguished on arrival at Wembley. The geniuses on the venue’s logistics team have decided to only let punters with standing tickets through one entrance, and the sight of a five mile long queue when showtime is perilously close is enough to bring tears to my eyes. As the clock ticks round to 7.45pm, the sadness gives way to utter rage and a passing steward’s remark of “that will be that Korn band on now” is my cue to spew forth a wave of profanities at anyone within earshot. What is perhaps more surprising than my potty mouth however, is the general display of apathy from the waiting fans. It is all very English and restrained – whoever said that metalheads were a lairy breed was very much mistaken.

Sixty minutes later, I am stood on the sticky Arena floor,  witnessing the inimitable Jonathan Davis and the rest of Korn tearing it up with ‘Hater’ (from latest release The Paradigm Shift) before the bagpipes are whipped out for a stirring ‘Shoots And Ladders’. Davis is resplendent in his ubiquitous kilt and black knee socks as he stomps around the stage, and those rasping cries of “Knick knack paddy whack / give a dog a bone / this old man came rollin’ home” are gleefully bellowed back at him by the bouncing throng. The closing moments of the song suddenly segue into a mini rendition of Metallica classic ‘One’ much to the delight of everyone here, whilst the ferocious chug of super hits ‘Got The Life’ and ‘Freak On A Leash’ open up countless circle pits and get the obligatory pints of beer / piss flying through the dense air. 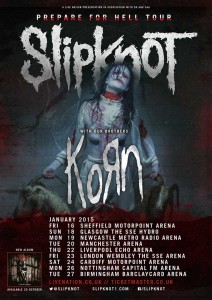 And the surprises keep on coming with JD’s sudden announcement of “We wanna do something we’ve never done before, something special.  With the help of our friends from Slipknot!” With that utterance Corey Taylor et al come into view and my eardrums are immediately ruptured as the “supergroup” launch into an absolutely storming cover of ‘Sabotage’ by The Beastie Boys. The scenes that follow are simply unreal and there’s zero doubt that we have just witnessed something bloody special here.  Arms are raised and voices are lost during closer ‘Blind’– it is an exhilarating (albeit brief for us latecomers) set from the Nu-Metal stalwarts and I’m sure many are praying that these guys pop up on a certain festival line-up this June.

The thirty something minute interlude is just enough time to ensure that the collective sweat and euphoria of the 12,500 maggots in attendance has reached inexplicable levels as the house lights dim, that curtain rises and the wonderfully sinister strains of XIX / Sarcastrophe begin reverberating around a packed out Wembley. Glowing red spotlights illuminate the nine-man masked machine that is Slipknot and all hell breaks loose.

Corey Taylor is a formidable frontman, with a stage presence that is as menacing as it is fiercely carnal. Admittedly, it is a struggle to tear my eyes away as he paces and stalks the stage during ‘The Heretic Anthem’ and vitriol soaked ‘My Plague’ but it would be fucking criminal not to take a fleeting moment to mention the unbelievable production and stage set-up this evening. A massive ram’s head protrudes from the centre of the back drop, there are two insanely high drum risers on either side for percussionists Shawn “Clown” Crahan and Chris Fehn to smash the bejesus out of and the constant pyro blasts (particularly noticeable during ‘The Devil And I’) are hotter than Satan’s gaff in deepest July. Imagine if you will the darkest circus ever, picked up and dropped into a mental asylum and you’re on the right track. Material from current album .5 The Gray Chapter sounds just as fresh and aggressive as that from say Iowa or the nine-piece’s self titled debut, with ‘The Negative One’ sending all and sundry batshit mental. The sheer number of frenzied pits that open up (and stay open) is a true testament to this band’s innate ability to light a proverbial fire under our arses almost twenty years down the line.

This passion and intensity is not lost on the Slipknot collective and Taylor pays homage to the crowd on more than one occasion (“Every time we come back here, you make us feel like one of your own”) and thanks us for making this “the best night of the tour so far”- granted he has probably done the same in Dublin, Sheffield etc. but it’s a touching sentiment nonetheless. I’m thrilled with the inclusion of ‘Three Nil’ on the setlist, but this personal joy is totally eclipsed on hearing ‘Before I Forget’, ‘Duality’ and ‘Wait And Bleed’ all rattled off in quick succession. The sheer cacophony that erupts is staggering and every single lyric is bellowed back in ecstatic unison. By this stage, I’ve completely lost my shit and been hit in the head with a trainer, and then it happens, that all too familiar breakdown part way through ‘Spit it Out’. Three quarters of the venue know what’s coming and are already crouched down on the soaking wet floor by the time Corey utters those infamous words “Now, when I say jump the fuck up, what are you gonna do?” His instruction to unleash hell is obeyed to the letter as I along with twelve thousand others jump the fuck up in a tidal wave of utter destruction.

‘Custer’ is an absolute colossus live and those savage, repeated refrains of “Cut cut cut me up and fuck fuck fuck me up!” could easily be the soundtrack to the apocalypse. Hoarse voices are happily strained to the limit as an encore of ‘(sic)’, ‘People = Shit’ and ‘Surfacing’ brings an utterly triumphant set to an end and the applause rings out long after Slipknot have exited.

Spectacular. Here’s to another twenty years – and bring on Download.  10 out of 10