Tours ain’t what they used to be…

The announcement of Simple Minds run of UK shows in the Spring of 2015 may have passed unnoticed outside of their fan base but just take a look at that itinerary. Starting March 27th through to May 4th they are playing no fewer than twenty nine (yes, 29) dates right across the UK including regional shows in Stoke, Leicester, Birmingham, Nottingham and Oxford. There aren’t many of the established bands putting together those kinds of schedules nowadays and quite often “tours” will consist of little more than London, Manchester and Birmingham. That is precisely the route that Motorhead are following in November (they visit NIA on the 6th) although with Lemmy’s well publicised health concerns this is only to be expected and they have done some extensive treks in the years gone by. Back in 1984 the then new line-up of Lemmy, Philthy, Wurzel and Phil Campbell kicked off an eighteen date tour with an early morning appearance on the short lived Saturday Starship from the car park of the Central TV studios in Birmingham. The full broadcast is widely available on YouTube, check out this version of ‘Iron Fist’:-

Also looking back to 1984 is Bryan Adams with the thirtieth anniversary of Reckless tour that stops off in Nottingham (November 13th) and Birmingham (November 19th). First time around Adams toured the album as the special guest of Tina Turner with four nights at Wembley and two at the NEC in March 1985. By the time he returned to these shores a couple of years later the Canadian had himself moved up to headlining arenas with (yes, you guessed it) four nights at Wembley and two at the NEC. Also three decades ago Queen were playing their last ever shows in Birmingham with three nights at the NEC from August 31st to September 2nd.

Along with Adam Lambert, Queen (Brian May and Roger Taylor) have just announced a run of seven arena shows early in 2015 that calls at the NIA on January 23rd and Nottingham’s Capital Arena the following night. By January the £26 million refurbished NIA will be fully up and running and rebranded as the Barclaycard Arena. At the time it opened back in 1991 the NIA was the largest indoor arena in the country although was certainly in need of some updating to bring it up to scratch. Things certainly got off to a shaky start for the arena when Elton John slated the sound quality after his first appearance there in 1992 and it was some sixteen years until Elton returned to the NIA with the Red Piano tour of 2008. The Who have already performed twice at the NIA in 2004 and 2007 and they bring their 50th anniversary tour to the City Centre venue on December 7th. Over the years the NIA has also played host to Oasis, Eric Clapton, Duran Duran, Black Sabbath and of course the Prince of Darkness.

There are an abundance of gigs coming up between now and the end of the year and hopefully you will all be keeping a close eye on our new and improved gig guide. Just a few of the highlights are Bernie Torme (The Robin, October 16th), The Boomtown Rats (Wolverhampton October 18th and Leamington October 28th), T’Pau (The Robin, October 31st) and Robert Plant (Wolverhampton Civic, November 21st). Genesis fans are in for a double treat in November when Steve Hackett brings his Genesis Revisited show to Symphony Hall for the third and final time on the 4th and then Peter Gabriel stops off at the LG Arena for his So – Back To Front retrospective tour on the 28th. Gabriel is accompanied by the original touring band from 1987 (This Way Up tour) which played three nights at the same venue from June 30th to July 2nd. Three nights was still two fewer than Genesis themselves played back in February 1984 on the Mama tour when their shows in Birmingham constituted the only European dates of the entire trek and were subsequently documented on VHS.

Finally NWOBHM aficionados would be well advised to get down to Route 44 in Acocks Green next weekend as Quartz play a home town show on October 11th ahead of a festival date in London, admission is just £8. 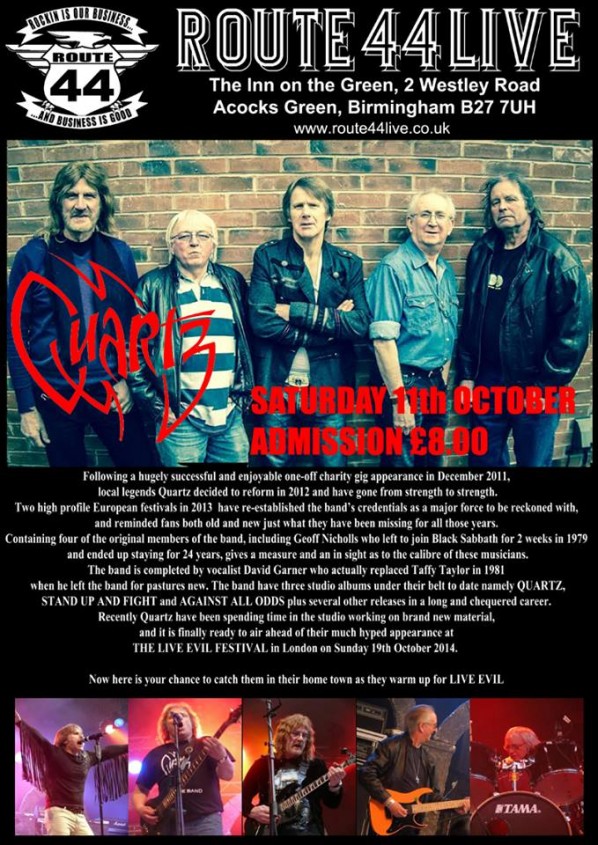