At their lethal best…

Let’s just start by saying that Slayer is an institution of the thrash metal world. You don’t survive over a thirty four year period without being resilient, hard-nosed and have no shortage of guts. The present day line-up of original members Tom Araya and Kerry King is filled out with the excellent Exodus’ Gary Holt and the revitalised Paul Bostaph on drums. For most fans. I don’t think you can ever replace titans like Jeff Hanneman or Dave Lombardo, but you either persevere or you fold and give up. As long as the band still has the ability to perform live and produce new material I will always say play on. So bring on Repentless.

This isn’t the best album that Slayer has ever made. They are in an impossible situation to try and top the brilliance of the past. But people also need to start living in the real world. The years – as much as we’d wish them not to –certainly take a toll on bands as much as anyone else, and Tom Araya in his 50s will not sound exactly as he did in his 20s. Repentless sounds like modern day Slayer. It’s still full of aggression and there’s that very obvious Slayer edge to the sound and it’s a very good album without maybe hitting the heady heights of the classic days, and aside from ‘Delusions Of Saviour’ which serves very little purpose and just gets in the way, there’s plenty here to like.

The title track should be the opening to the album and kicks things off the way it should. This is Slayer. This is fast, hard and really aggressive, Bostaph’s drums pounding, King and Holt ripping the guts out of you, and Araya’s vocals spat out in great style in something approaching a track that would fit into the Seasons… era of the band. The standout tracks on the album are ‘Vices’ and ‘Piano Wire’, which, although generally a little bit slower are again more of what I like and where Slayer are being the Slayer I want. I don’t want Slayer to develop in a different direction or grow/mature into something they aren’t. ‘Atrocity Vendor’ is a perfect example of what Slayer is and what has always set the band apart from other thrash bands: the aggression in the vocals and the music – flat out and furious. This is where they are at their lethal best and nothing has changed there.

Maybe there’s a little too much familiarity in places but Repentless sounds like you want it to and Slayer’s formula doesn’t need changing. Wailing solos, drums that don’t let up and a singer in metal that is as recognisable as ever, this album is a bold statement maybe, but Repentless is certainly at least as good as anything else Slayer has released this century. 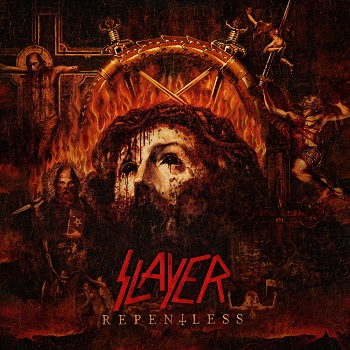