Formed in Wythenshawe, Manchester in 1975 Slaughter & The Dogs caught that moment in time when pub rock morphed into punk. Like Eddie and the Hot Rods or Dr. Feelgood only cranked up a few notches their incendiary debut album Do It Dog Style captured the best of punk and foreshadowed the Oi! movement and stands as a pillar of both genres.

Disc One – Do It Dog Style

A relative latecomer to the punk party Do It Dog Style was released in June 1978, long after the first wave imploded. Yet Slaughter & The Dogs were there from the very beginning (having supported the Pistols at their famous Lesser Free Trade Hall gig) but, like most pioneers, they got left behind as those that followed honed their sound for mass consumption. But time’s been very kind to Dog It Dog Style and album opener ‘Where Have All The Boot Boys Gone?’ in particular. An amphetamine charged slice of punk that arrives with all guitars blazing it’s the musical equivalent of a good punch up that

‘Victims Of The Vampire’ is delivered with all the needles firmly in the red and sounds very proto-psychobilly as it races along with an energy that was later harnessed by The Meteors. ‘Boston Babies’ continues at a similar frantic pace with Mike Rossi’s angular, scything guitars being anchored by Howard Bates’ infectious bass lines. It’s not until we reach the fourth track (a cover of The Velvet Underground’s ‘I’m Waiting For The Man’) that The Dogs take their foot of the listeners throat to deliver a punchy, more measured reading of Lou Reed’s finest lyric.

Another cover soon follows and this time in the shape of ‘Quick Joey Small (Run Joey Run)’. Originally recorded by bubblegum “supergroup” Kasenetz-Katz Singing Orchestral Circus here it becomes slightly sinister with Wayne Barett’s vocals delivered with the just the right amount of campness. ‘You’re A Bore’ and ‘We Don’t Care’ are stone cold punk classics and speed us towards another cover and this Time it’s the New York Dolls’ ‘Who Are The Mystery Girls’. Three cover versions on a debut album pushes things a bit too far especially when The Dogs had a plethora of cracking original material as evidenced by closer ‘Dame To Blame’ which could quite easily hang with the best of the Dolls.

The second disc in this set collects a whole host of rarities beginning with four tracks from the bands very first recording session. Slaughter & The Dogs took their name from Barrrett’s two favourite albums: Bowies Diamond Dogs and Mick Ronson’s Slaughter On 10th Avenue and these four tracks nestle somewhere in between the two with ‘Twist And Turn’ signposting the spiky amphetamine buzz that would become their signature sound. By the time the band released their debut single 12 months later they’d really hit their stride and punk doesn’t get much better than the furious a-side ‘Cranked Up Really High’ while its flip ‘The Bitch’ is equally frenetic.

This second disc is a veritable treasure trove and includes the two live cuts that appeared on the legendary The Roxy London WC compilation and finds the boys in fine fettle with the frantic ‘Boston Babies’ being very pogo inducing. ‘Johnny T’ was the flip of the ‘Dame To Blame’ 7” and settles the sore with an old Headmaster(!) in 90 blistering seconds. ‘Situations’ was the anthemic flip of the ‘Quick Joey Small (Run Joey Run)’ single (and would have made the better a-side) before that Lou Reed connection surfaces again with a pleasing cover of The Velvet’s ‘White Light White Heat’.

‘Scream & Scream Again’ makes the perfect companion piece to ‘Victims Of The Vampire’ while ‘The Fight’ overlays some electrocuted guitar above Brian Grantham’s solid drumming. The elongated 12” version of ‘Twist And Turn’ doesn’t really work as its extended nature saps out the vitality. Despite sounding like it was recorded on a small condenser microphone the live rendition of ‘Cranked Up Really High’ is carried along on waves of excitement. Similarly the two demo tracks that close the disc (‘Boston Babies’ and ‘I’m Mad’) are not of the best recorded quality but they drip with attitude.

Fully grasping the do it yourself ethos that was a prerequisite of punk Slaughter & The Dogs released a rather rudimentary recording of a live set from The Elizabeth Rooms, Belle Vue in 1977. Released a year later and titled Live Slaughter Rabid Dogs the plain, no frills sleeve that housed the record was pretty indicative of the sound contained within. Basic it maybe be but Live Slaughter Rabid Dogs found The Dogs in fine fettle as evidenced by opener ‘You’re A Bore’. A punchy little number that hits the ground running it sets up the following ‘Mystery Girls’ nicely and it’s a track that comes alive in front of an audience.

A rowdy crowd lap up ‘Where Have All The Boot Boys Gone?’…and if you close you eyes you can almost see the pint glasses flying! In the live environ ‘Waiting For The Man’ goes off the Richter scale as does the vivacious ‘Victims Of The Vampire’. It seems like Slaughter And The Dogs haven’t thought about pacing themselves as they deliver a full on performance with ‘Boston Babies’ and ‘I’m Mad’ following in quick succession while a reprise of ‘We Don’t Care’ is a suitable set closer.

Finally available after being out of print for many years, Slaughter & The Dogs’ debut gets a loving reissue and Do It Dog Style has never sounded better. If you’re new to the band there’s no better place to start than here while old timers will finally be able to retire their vinyl copy! 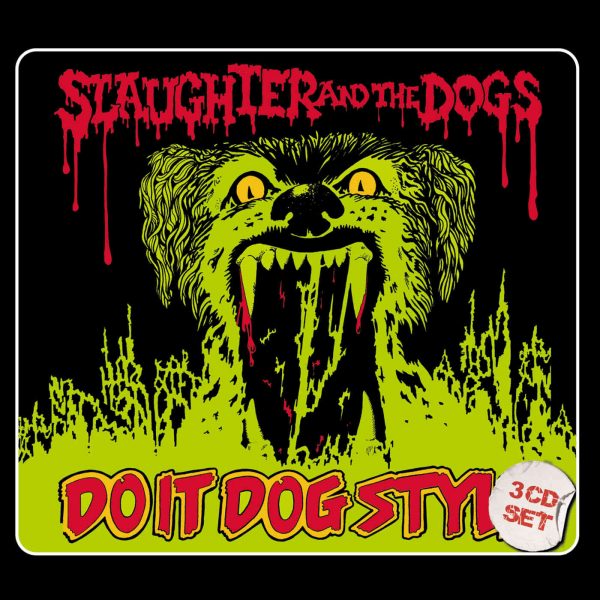