If you are a regular listener to Planet Rock, you will have heard all about it: after a four-year silence, Slash is releasing his new album, 4, on 11th February and, again, his partners in crime are Myles Kennedy and The Conspirators. As part of its promotion campaign, some of you will have entered the prize draw for a signed Slash Les Paul guitar, and since ‘The River is Rising’ is regularly being aired on radio already, you will know what to expect.

Slash’s PR have done such a brilliant job at promoting the album that there is not much left but simply wait for its release date! Therefore, this review could go like this: Slash + Myles = Perfection. Full stop.

As tempting as this may be, I should really write a little bit more than this. How do you explain, though, how Slash is a genius? Or why Myles is his best choice of a singer? I don’t know; words fail me here, but it is as clear as a day that this tandem is a match made in heaven.

For these reasons, let’s not try to reinvent the wheel, and simply acknowledge the obvious fact: SMKC have produced yet another piece of work that their fans will love. Whether those are Slash’s own followers of his journey with Guns ’n’ Roses and beyond, or at Myles’ end, keeping up with his own solo career and, previously, his years with Alter Bridge etc. the new product of this partnership is bound to please. Having worked together for good ten years now, the two icons could have decided to do something more different. They haven’t. So don’t expect any surprises: this is not an experimental album. Which is also more than Okay: in times of upheaval, uncertainty and all that surrounds us nowadays, we could all do with a bit of predictability – which, please note, is not a synonym for boring!

4 is a perfectly mastered solid piece of the rock Slash is known for, perhaps a bit more raw and rough compared to his previous releases. As before, he still delivers perfect exemplars of first class mainstream rock (‘Actions Speak Louder Than Words’, ‘Fill My World’, and the admittedly commercial ‘C’est la vie’), but also wilder and unpolished rock where he takes a walk off the beaten track (‘Call Off The Dogs’). As Slash says about the latter song, you can’t overthink something like it, “because it kills the spirit”. They banged this song out quite quickly: “just jam it and that’s basically it”.

This is how the spirit of the entire album goes: a bunch of cool guys who simply got together to jam. From the grabbing killer riff, it starts off with, you can feel the energy of a live music session, spiralling pretty much out of control, fuelled by Brent Fitz’s mad drumming. Myles casually stands there, with his usual humble demeanour, hands in his pockets, and effortlessly blows you away with his fantastic as ever vocals, making you for a millionth time wonder: wow, man, isn’t Axl secretly jealous of his mad hatter having found this other guy who sings just as well (or dare I say, even better)?

The guys are keeping things varied, so you won’t get bored listening to the same style throughout the album. ‘Whatever Gets You By’ with its slower and steadier, kind of Rage-Against-the-Machine-recitative style, rhythm will get you nod your head and maybe even want to rap along with its cool grungy vibe. ‘C’est la vie’, on the other hand, is quite easy going, with a funky and rather contagious start and a catchy dance along tune which, needless to say, Myles makes sound deceivingly easy to sing.

The range of moods is as varied as it can get. ‘Actions Speak Louder Than Words’ with its perfect construction and rock’n’roll vibe is the kind of song you would enjoy in a rock club on a night out with a pint in your hand. In ‘Spirit Love’, the Oriental/Indian opening, less characteristic of Slash, builds up steadily with Myles’ soaring vocal, and steadily picks up the pace. And just as they have seriously got there, in goes the lyrical yet catchy ‘Fill My World’ giving you the chance to catch your breath before it all explodes again with the raw rock of ‘April Fool’.

Ending on a power ballad note, ‘Fall Back To Earth’ is bound to be the next hit off this album. The main theme from the intro with Slash’s literally weeping guitar is to die for. The duet between Myles and the guitar, trying to outdo each other, where the instrument sounds just as emotional as the voice, finishes the album on an elevated note. Myles is uncatchable, in his element, totally up there, untouchable by anything else but the soaring riff. Masterful and epic ending to a very good album.

For trivia lovers, here is an interesting fact: this is the first ever album release on  Gibson Records – new label based in Nashville, following the 30-year collaboration between Gibson and Slash. This is being commemorated with a limited–edition release of the SLASH Les Paul Standard 4 Album Edition guitar and package. Only 250 Slash Les Paul Standard 4 Album Edition guitars are available worldwide on www.gibson.com and at select authorized dealers. The unique guitar package also features the new SMKC album 4 on vinyl, a 4 album guitar pick tin and decal, and a signed SMKC band portrait.

With 4, we are being reminded that Slash and Myles are still out there creating great music, and while we only recently saw Kennedy on stage in the UK, he will be back in less than a month, in the short UK leg of The River Is Rising Tour that has just begun in the US. 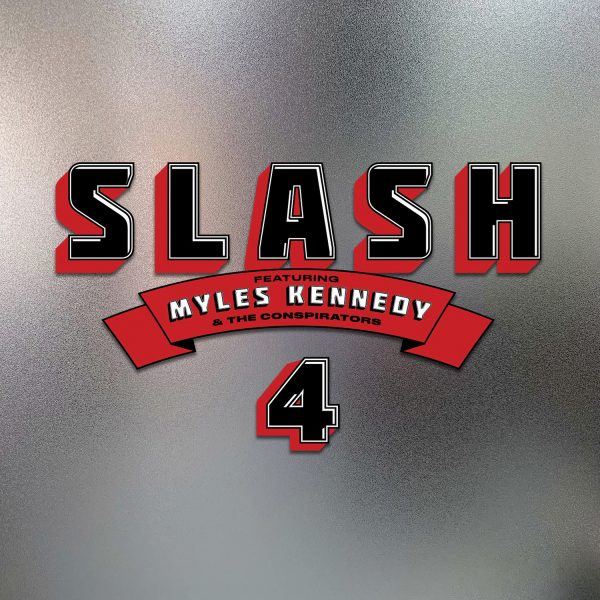