With many names still to be added the current line-up already reads like a ‘who’s who’ and features some of the biggest names in punk. Already confirmed are American heavyweights Sum 41, NOFX and Pennywise alongside British rockers Don Broco.

With several stages you’re certain to find something of interest from old school punk (The Vandals) to emo (The Wonder Years) and those with a penchant for hardcore will be delighted to hear that legendary UKHC stalwarts Your Demise will be making an appearance alongside Stray From The Path and Ice Nine Kills. If your tastes veer towards metalcore then be sure to check out Malevolence, Canadian killer crew Counterparts and the ferocious Code Orange. Slam Dunk also ensures the scene has a bright future by promoting young talent and this years brightest band are the blood soaked Wargasm. 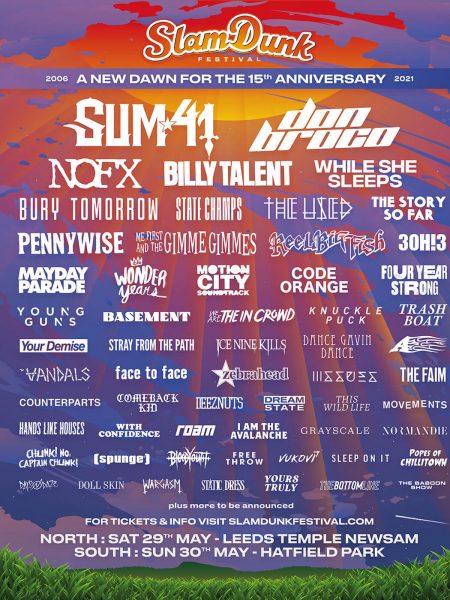 For those who wish to start the party early Leeds is hosting a launch event (on Friday 3rd at Leeds Becketts) and for those hardy souls who want to rage until the early hours both days will be hosting aftershow parties for those aged 18+ (at Leeds University and Islington 02 Academy respectively) and a shuttle service will run from festival to venue.