A thick slab of Slabdragger sludge…

I saw Slabdragger somewhere a couple of years back and was completely blown away by their swathes of thick sludge that threatened to overwhelm you with its oppressively destructive drones.

So it’s with unashamed enthusiasm that I get my hands on a preview copy of the Londoners’ new EP, the impressively titled Rise of the Dawncrusher.

It’s their first recording since their debut Regress album five years ago, with the exception of a split release with Meadows. A number of factors have contributed to the extended wait for this release – including line-up and health issues – but now we’re there, it’s all been worthwhile.

Once again Croydon’s tenacious trio have created a deliciously thick fuzz of a record that will leave your ears buzzing like a hornet for days.

The five tracks nudge through the hour mark with most of them around 15 minutes long during which a scintillating sequence of hypnotic riffs spew forth like some kind of uncontrollable virus.

Slabdragger at their more introspective moments flirt with the corridors of doomland but the more prevalent and pervasive dynamic is for viciously vibrating sludge that’s woollier than a Women’s Institute knitwear convention.

‘Mercenary Blues’ is a wonderfully belligerent opener with a low slung bass so deep you sink right into its shuddering grooves.

‘Evacuate!’ is a five minute riotous track with screeched vocals just about surfacing above the heady blend of throwaway riffs and frenetic skin pummeling. 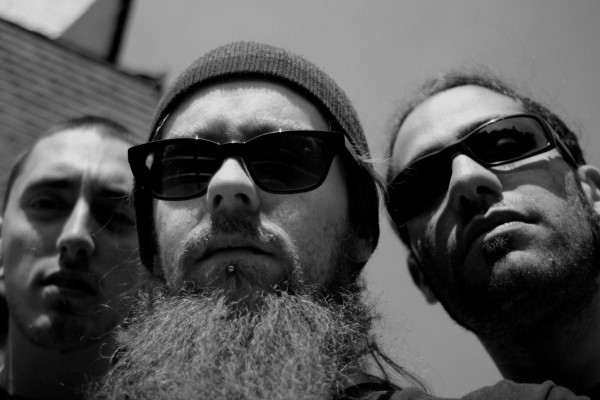 ‘Shrine of Debauchery’ is a more considered, reserved number, much less anarchic and angry. It takes its time to reach its full powers, merely rambling with an air of carefree disdain for the first few three minutes before that familiar deep growl scythes through the peace, pulling with it a curtain of darkness and despair.

You will feel the pressure pushing your rib cage to its limits on ‘Dawncrusher Rising’ as Slabdragger roll out more juggernaut riffs that don’t so much as send you flying but gradually grind you down with their unwavering tone of menace.

Once the vocals flail despairingly on top, Slabdragger bare more than a passing resemblance to early Conan, a hypnotic soundscape that threatens to strip the paint off the walls.

The final track of the five is the 17-minute epic tome ‘Implosion Rites’ which really will test your sludge stamina limits.

The shockingly vivid and spectacular sleeve has been created by the talented comic book artist Jimmy Pearson, all spacey, intergalactic and futuristic. So how to sum up ‘Rise of the Dawncrusher’ in one word, Cosmic!