Download Festival, the world’s premier rock event, is coming back with a bang in 2022. The first major festival of the summer will be headlined by the mighty KISS, Iron Maiden and Biffy Clyro, with other huge acts on the bill including A Day To Remember, Deftones, KORN, The Distillers, Funeral For A Friend and many more. As the first full-capacity Download Festival since 2019 and following last year’s phenomenal Download Pilot, which paved the way for the return of live events, it’s pulling out all the stops for 2022 with a gargantuan line-up of the world’s most exciting bands in rock, pop punk, hardcore, metal and much more. 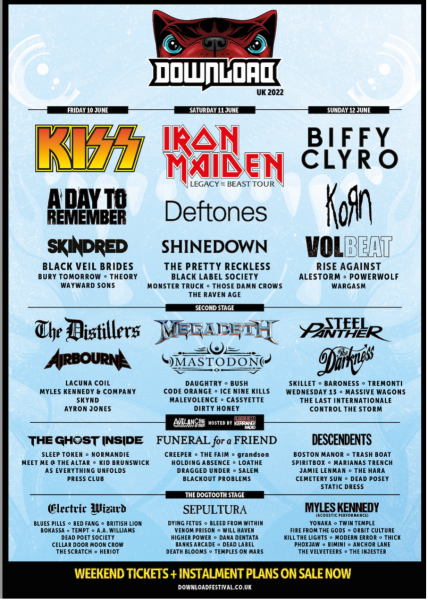 Announced today are 14 new acts joining the packed bill, including the likes of Skindred, YONAKA, Will Haven, Kid Brunswick, Bimini and Dana Dentata. The three-day festival takes place on 10-12 June 2022 at the spiritual home of rock in Donington Park, Leicestershire. Tickets are now on sale via www.downloadfestival.co.uk/tickets.

Iron Maiden, hailed as one of the greatest live acts of all time, will return to Donington to headline Download Festival on Saturday night, in what will be one of only two UK festival shows in 2022, while the legendary KISS will storm the stage on Friday night to perform their only UK show of the summer. After their fantastic headline set in 2017, Scottish rock titans Biffy Clyro will also be making their highly anticipated return to headline the festival on Sunday night, showing off tracks from ‘A Celebration of Ending’, which topped the UK charts in 2020, and their most recent studio album, the critically acclaimed ‘The Myth of Happily Ever After’.

Joining the already confirmed likes of The Distillers, The Pretty Reckless, Ayron Jones, Lacuna Coil, Loathe, Malevolence, Normandie, Static Dress and more, it is announced today that Download live favourites Skindred will be back to tear things up after an epic performance at the Download Pilot in 2021, having been described by many as their highlight of the entire weekend. The Welsh reggae metal band will be bringing back their iconic ‘Newport Helicopter’ and are guaranteed to have the crowd going wild once more.

Skindred frontman Benji Webbe says: “Playing the Download pilot after being locked down for a year and a half was an amazing experience so being invited back to our favourite festival and spiritual home to play alongside the likes of KISS and Maiden is a dream come true. Plus we have some amazing rockin’ new tunes which we cannot wait for you all to hear.”

Brighton rock band YONAKA also made a splash at last year’s Download Pilot, and that was just the beginning, as they’ll be causing chaos once again this year. Frontwoman Theresa Jarvis says, “Aghhhh Download! Some of us have been going since we were 14 so it’s an absolute pleasure to be performing there again. The energy is always amazing and such an exciting lineup of music.”

Drag sensation Bimini rose to fame on Ru Paul’s Drag Race and released their punk non-binary anthem God Save This Queen last year. That was only the first step on their musical journey, because Bimini will be gracing the crowds of Download with their presence in 2022 for the very first time.

Highlights across the weekend include the previously announced Spiritbox, one of the hottest bands in the world at the moment, who have been upgraded to the Avalanche Stage due to huge demand. Post-hardcore break-out stars As Everything Unfolds have also upgraded and are now set to bring their invigorating take on the genre to the Avalanche stage on Friday 10 June.

Download is THE place to see the brightest rising stars. Other ones to watch at Download 2022 include the hell-raising Wargasm, nu-metal pop provocateur Cassyette, Liverpool nu-metallers Death Blooms, pop punk trio Meet Me @ The Altar, as well as Holding Absence, Those Damn Crows and Venom Prison all flying the flag for rip-roaring rock from South Wales.

With more than 100 acts already confirmed to return to Donington in 2022 for the first major festival of the season, Download Festival could not be more ready to reunite with its incredible community for the first time since 2019. For further information, please visitdownloadfestival.co.uk.