For many years Christian rock has had a bad rap; everything about it seemed to be at odds with the carefree rock n’ roll lifestyle. That all changed with the arrival of Skillet, a band who brought an almost militant urgency to a scene that was in danger of becoming staid. Very much in that spirit their 11th album Dominion, finds the band forging onwards and stands as a career best.

In America’s South a skillet is a dish into which random ingredients are thrown to make a unique meal, so it seems the perfect moniker for this Nashville-based quartet. Alt-, nu-, and symphonic metal are just some of the tags thrown at Skillet and while they all ring true the band are about so much more. They’re a combo who defy genre categorisation yet have their own signature sound and the opening track on Dominion, ‘Surviving The Game’, could only belong to Skillet. It’s contemporary (but also timeless) and swings with a danceable groove; it’s heavy but lithe and skips on light feet. The monumental riff is used to tease the listener, it is held back and held back, like a dog straining on a leash, waiting for the optimal moment to be set free and when it’s finally unchained it goes straight for the throat.

Dominion is the sound of a band revisiting their rock roots and it certainly works best when it hits top gear and things really start rolling with ‘Standing In The Storm’. Aided by a wide, expansive production it orbits the listener with the force of a planets gravitational pull and leaves you feeling dwarfed beneath its towering brilliance. Picking up the ball and running with it, the title track is a turbo charged slab of rock that finds squealing guitars colliding with thunderous drums and it’s a maelstrom that makes the power ballad that follows all the more powerful. It’s quite a seismic shift and brings the juggernaut that is Dominion to a shuddering halt. ‘Valley Of Death’ is a schmaltzy kind of ballad that seems a tad formulaic and while it does inject a change of pace it feels regressive on an album that’s largely forward facing.

With all band member supplementing John Cooper’s vocals Skillet are afforded a rich, textured sound and when combining their talents tracks such as ‘Destiny’ become huge and cavernous. Likewise, ‘Refuge’ marches with military muster and, a song of Biblical proportions, makes good use of musical dynamics to juxtapose loud and quiet passages which constantly repositions the listener. A spark to light kindling the aptly titled ‘Ignite’ is a raucous number that punctuates its driving beat with guitars that deliver a series of electric shocks. If my review makes Dominion sound eclectic that’s because it is yet it hangs together as a cohesive whole, even when closing song ‘White Horse’ introduces some rapped vocals. Rich in symbolism ‘White Horse’ makes for a fitting finale and signposts a bright future.

As one of metal’s hardest working bands Skillet have been rocking the world for 25 years yet while many bands of their vintage are happy to settle into heritage status Skillet are finding new ways to move their sound forward and long may they continue. Amen to that. 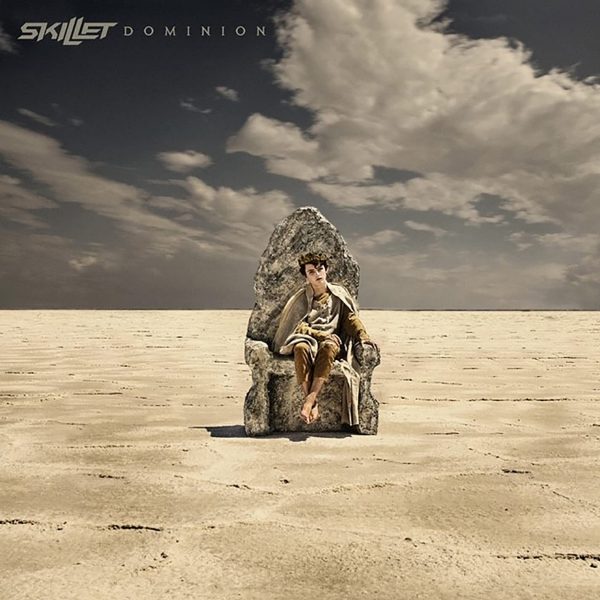