Doom can be a tad testing for those who can’t take their musical medicine covered in black sticky stuff which threatens to overwhelm your body like an indigestible liquorice stick. If that’s you then maybe the new EP from Yorkshire crew Skandal may prove a little easier to swallow. The Leeds boys have even come up with a nice label for their own distinct sound, Doom and Roll.

Skandal are a duo made up of Giorgos (vocals + bass) and Alex (drums). Giorgos isn’t the most often heard name around Pontefract and Rotherham, so it’s no surprise to learn the band’s founder is from Greece. Although a few musical projects were explored in his homeland it was only when linking up with Alex  at Leeds University did Giorgos meet his musical soulmate. Within the various contours wrapped up in this four song release expect to find elements as diverse as Motorhead, Opeth and Sabbath. Fans of Rotting Christ may also feel they’re on familiar ground in certain places and if so put that down to the influence in the studio of George Bokos who has also mixed for the Greek gods.

This 20-minute fun ride kicks off with the title track which bounces along with the same energy levels generated by the likes of Orange Goblin. There’s a healthy vitality within the high tempo thrusts, pausing for some reflective breaths mid-track before gradually launching itself back into a throbbing melee. Second track ‘Erinys’ is a far more abstract offering with more tinkling chimes than you might expect to encounter in your local takeaway on a Friday night. A purely instrumental piece, although without many instruments, ‘Erinys’ is an oblique oriental diversion. Sit back, close your eyes and you’ll be transported away on a magic carpet.

‘Motordeath’ kicks off with pedal firmly to the metal, the early surge sounding like a homage to Motorhead, with the song title kind of confirming that too. What Skandal do do very neatly, to use a football metaphor, is drop the shoulder and then move off in another direction rather swiftly. It slows almost to walking pace before Giorgos reaches deep into his stomach before emerging with another great beefy roar with a few razored riffs adding tension to the soundscape while Alex is full of inventiveness and restless energy from on top of his stool.

I’ve given this 20-minute treasure trove several spins, and the songs really do connect in a refreshing way, closer ‘Stillwater Servant’ sounding like a massive Monster Magnet anthem, although if you’re looking for those Opeth shades then this is also the one for you. With the family links to Greece, it’s no surprise to see that Skandal have almost played as many gigs there as around the clubs and venues of Yorkshire. Hopefully we’ll get to see more of them in the future. These two fellas make a mighty fine racket creating an impressive headbanging sonic menu that tastes better than a cup of Yorkshire Tea… 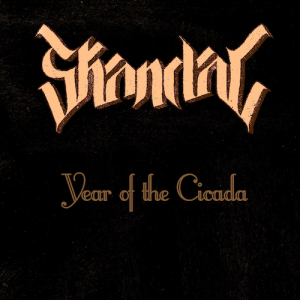