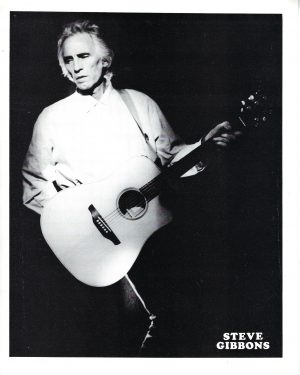 A new ‘Star’ on Broad Street’s celebrated Walk of Stars in Birmingham, is to be awarded to Steve Gibbons, the famous Birmingham singer-songwriter.

The Lord Mayor of Birmingham, Councillor Maureen Cornish, will make the presentation at the Birmingham Rocks event, which opens at Velvet Music Rooms on Broad Street at 5pm on Sunday 6 November.

The presentation will be followed by a live performance of Steve Gibbons on stage, accompanied by the Steve Gibbons Bank of Johnny Caswell on guitar, Simon Smith on bass guitar and Howard Smith on drums.

Speaking ahead of the presentation, Steve Gibbons said: “I’m surprised but thrilled to be receiving one of the ‘Stars’ on Broad Street!”

Mike Olley, general manager of Westside Business Improvement District, which organises the ‘Walk of Stars’, said: “Steve Gibbons truly deserves this recognition and we are proud to be making him the 48th ‘Star’ on our Broad Street Walk of Stars.

“He is not only a giant in the world of music, but he has never forgotten his Birmingham roots, devoting himself to fundraising for many local causes, such as Birmingham Children’s Hospital.”

Steve Gibbons was born and raised in Harborne and started his professional life as a plumber’s apprentice, but he was a big Elvis Presley fan and joined a band called The Dominettes in 1958.

Their first performance was at The California pub near Weoley Castle, with other regular venues including the Grotto Club on Bromsgrove Street, The Sicilia Coffee Bar in Edgbaston and the Firebird Jazz Club on Carrs Lane.

By 1963, The Dominettes were renamed The Uglys, whose hits included Wake Up My Mind, It’s Alright, and Something.

Gibbons then teamed up with guitarist Trevor Burton from The Move in 1969 to form a new group called Balls, before he left to join The Idle Race which quickly evolved into the Steve Gibbons Band, regularly touring with The Who.

As well as his music career, Gibbons – now aged 81 – also devoted time and energy fundraising for the Birmingham Children’s Hospital and other charities. 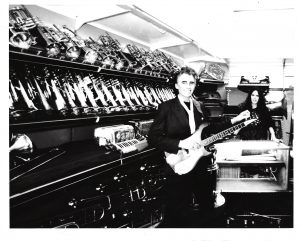 The ‘Star’ comes after local campaigner Jim the Hat, along with his friends, collected thousands of signatures on a petition which was handed in to Westside BID, which organises the Stars, last year.

The nomination was carefully considered by the Walk of Stars committee, chaired by Birmingham comedian Jasper Carrott.

Jim Simpson, the former Black Sabbath manager and one of Birmingham’s greatest music impresarios via Big Bear Music, has organised the presentation to be the focus of the latest Birmingham Rocks event on 6 November.

Mr Simpson said: “Steve Gibbons has been at the heart of rock music in this city, almost since the very beginning, and this ‘Star’ is a much-deserved tribute to his life and work.”

Dani Hadley, director and co-owner of Velvet Music Rooms, said: “We are very honoured to be hosting this event that will celebrate the massive contribution to music that Steve Gibbons has made.”

Mr Olley explained that the Walk of Stars had been suspended and put into storage for some years due to the Metro tram extension work and Covid.

He added: “This leaves us not in a perfect position to comprehensively reinstate the Walk of Stars programme, but we feel it important that we keep the spirit alive.

“While we are experiencing technical issues with our Walk of Stars estate of physical stars, we don’t want to deny Steve Gibbons his rightful place.

“The previous 47 ‘Stars’ are currently in a safe storage due, however we are now planning to re-lay them all along with Steve Gibbons’ new ‘Star’ next year.”

The full list of Broad Street ‘Walk of Stars’ can be found here: www.westsidebid.co.uk/walk-of-stars/

● The presentation of Steve Gibbons’ ‘Star’ will take place at the Birmingham Rocks event that opens at 5pm on Sunday 6 November at Velvet Music Rooms on Broad Street. There is free admission to both the presentation and the performance afterwards.