Part futurist rock band, part multinational conglomerate Sigue Sigue Sputnik performed the ultimate rock n’ roll swindle. Fully embracing crass commercialism, they merged rock’s roots with a dystopian, post-apocalyptic electronica and beamed it back to 1986 from the distant future. The resulting album, Flaunt It, still sounds fresh and vibrant and it’s been lovingly remastered as a box set featuring a host of remixes, rarities and a previously unissued live set from Abbey Road.

Tony James (Generation X) formed Sigue Sigue Sputnik in 1982 and set about recruiting a cast of characters who looked as good as they played and Flaunt It’s opening cry of “I want to be a star!” succinctly set out the bands stall. First track (and debut single) ‘Love Missile F1-11’ sounded like nothing before (or since). Mixing elements of Mozart, backward masking, machine gun guitars with some lunatic sampling ensures that ‘Love Missile F1-11’ is a case of sensory overload. The musical equivalent of a flashing neon strobe it demands your full attention as the sonic shifts constantly reposition the listener. With a blatant disregard for musical convention it’s easy to see why the band upset the contemporary press (along with po-faced DJ’s like Simon Bates).

The calm after the storm ‘Atari Baby’ provides a moment of brevity before the bands third single ‘Sex Bomb Boogie’ (released only on VHS, so ineligible for the charts) deconstructs the bands modus operandi so all that’s left is a driving beat…but what a beat! It’s the type of song that knocks on your cranium and it won’t go away until you open up. ‘Rockit Miss USA’ is shameless appropriation of Suicides ‘Rocket USA’, only reworked for ‘80s Yuppies and Wall Street narcissists. Perhaps prophetising the coming of Spotify, Sigue Sigue Sputnik sold advertising spots in between songs, (which is another reason they were loathed by the mainstream media), however, due to the cinematic nature of Sputnik’s sound the adverts don’t seem out of place and they ensure Flaunt It flows continuously.

Sigue Sigue Sputnik’s love of film is scrawled all over this disc with ‘21st Century Boy’ featuring a sample of Bach’s ‘Toccata And Fugue In D Minor’ (as a nod to Rollerball) while the huge classical refrains that permeate ‘Massive Retaliation’ make it a film in itself. ‘Teenage Thunder’ is a spiky, angular vision of cyberpunk that takes a midnight stroll through down town Tokyo before we reach the last cut, ‘She’s My Man’. On an album that lives life at a furious BPM Sputnik start to run out of steam as we reach Flaunt It’s conclusion and ‘She’s My Man’ is fizzy pop finally rather than a big bang. As a bonus ‘From The Gutter To The Stars’ is a spoken word montage in which Tony James outlines his Sputnik corporate takeover (like Malcolm McLaren; only with a filofax).

The first bonus disc collects together a host of remixes, primarily from debut single ‘Love Missile F1-11’. In fact, you get seven versions of ‘Love Missile F1-11’ on the spin and while they’re all markedly different they’ll stretch the patience of the casual listener so this disc is one for the hardcore fan. The 7” single mix of ‘Love Missile’ is perhaps the definitive with the Japanese Mix coming a close second. With its stomping beat ‘Massive Retaliation’ lends itself better to remixing and the two versions here have a Clash meets Soft Cell via Big Audio Dynamite feel. Two versions of ‘Sex Bomb Boogie’ round out the disc but neither trouble the majesty of the original.

Like stepping onto set of a David Lynch film Disc 3 opens with the disconcerting beat that is ‘Hack Attack’. Using repetition as a weapon ‘Hack Attack’ was the B-side to the ‘Love Missile’ single and, as with its flip side, seems set to burn itself out on its own frenetic energy. Imagine Elvis jamming with The Cramps after imbibing LSD and you’d have something approaching ‘Buy EMI’. The sheer variety of tracks on this disc make it a far easier listen than its predecessor with ‘Dancerama’ injecting a nice change of pace before a live version of ‘Suicide’ filters Blade Runner and Terminator through a kaleidoscopic lens.

Three remixes of ‘21st Century Boy’ are included on the trot and, with little discernable difference, they become a little repetitious. However, an elongated version of ‘Buy EMI’ (the £4,000,000 mix) really works as the song shape shifts and becomes a whole new beast. Likewise, disc closer ‘She’s My Man’ is given a shot of adrenaline which is a vast improvement to the version contained on Flaunt It. Disc 3 is the sound of a band pushing the envelope with some risks working and others falling short but the good certainly outweighs the bad.

Sometimes bands with a strong visual presence will use it to mask a multitude of sins. Often it’s a case of style over substance with said acts often unable to cut it in the live environment. With that in mind I approached this live disc with a sense of apprehension wondering if Sigue Sigue Sputnik would be able to transfer their multilayered sound into the live arena. The opening bars of ‘Sex Bomb Boogie’ told me my fears were misplaced with the band becoming a more organic beast. The electronics are still present but are more subdued so the band sound android: half man, half machine.

A rumbustious cover of ‘Twist & Shout’ is well received and is quite pertinent considering the venue. ‘She’s My Man’ blossoms in the environs of Abbey Road with Neal X’s guitar brought to the fore (criminally buried on the studio version). An early raw and visceral version of ‘Love Missile F1-11’ is unleashed (tentatively titled ‘Shoot It Up’) and, bathed in glorious feedback, becomes an infinitely heavier monster. Stripped of all its bells and whistles ‘Rockit Miss USA’ is a fine set closer and it’s echo continues long after the disc’s stopped spinning.

With its focus on consumerism, globalisation and technology Flaunt It still sounds way ahead of the curve. If you want a glimpse of the future then it’s all here and there’s no better place to start than with this four-disc edition. 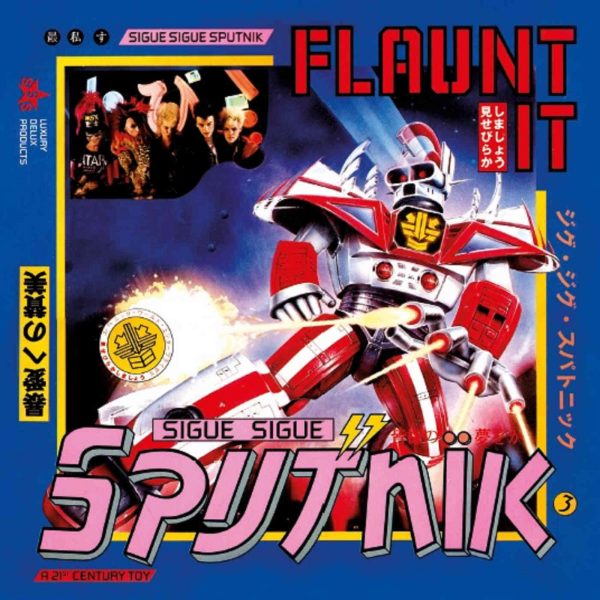