Maybe it’s a case of art imitating life, but there’s currently a plethora of angry young bands who are providing a grating soundtrack to these turbulent times. The latest band to come on to my radar are London based hardcore band Shooting Daggers. Since signing to New Heavy Sounds (the litmus for all that’s good and heavy) this trio have garnered an enormous amount of press through a demo tape and their explosive live shows. It seems all that hard work has been leading up to this moment and the seven-song Athames is the perfect summation of Shooting Daggers’ prowess.

An “athame” is a type of ceremonial knife used by witches during rituals and it just so happens that it’s also the perfect metaphor for this EP. Music is a weapon that Shooting Daggers employ to drive a stake through the heart of a patriarchal society and this feminist hardcore trio ensure that it’s driven particularly deep, and with force. Shooting Daggers play a psychedelic type of punk (like The Lovely Eggs jamming with the Dwarves) but it’s more bad acid than hippy dream and it’s surreal, in an unsettling David Lynch way. There’s also an American influence on their brand of hardcore which ensures that however raucous things get there’s a strong groove present which means that even as opening shot ‘No Exit’ tumbles from my speakers with its own frenetic energy, it remains strangely memorable. Encasing the listener within walls of sonics, ‘No Exit’ is a claustrophobic affair that’s parred back, flesh stripped from bone and, devoid of any excess baggage, it’s all the more vital for it and shows that Shooting Daggers won’t use two chords when one will suffice.

Shooting Daggers are fuzzed up and fuelled by proletarian rage and the seven tracks that comprise Athames are suitably spiky and angular and latest single, ‘Liar’, snares, and then pulls on the listeners flesh with a dozen barbs. Like an unruly child that’s weaned on cheap amphetamine ‘Liar’ is a hyperactive affair but don’t mistake Shooting Daggers as one-dimensional thrash merchants as there’s plenty of variety on offer and the shift in tempo means that things rarely become staid. Each song contained within Athames is a musical bomb primed and ready to detonate and ‘Carnage’ causes all sorts of mayhem with its throat-shredding vocals and bowel-loosening bass rumble. Think Discharge, Minor Threat and Yellow Machinegun and you wouldn’t be too far removed from the sheer velocity of closer ‘Missandra’ and, as with those seminal bands, you’re left feeling sandblasted at the EPs conclusion.

Some may lament the brief nature of Athames but with music this intense 16 minutes seems just about right. But it certainly lives up to the old maxim and leaves the listener hungry for more. 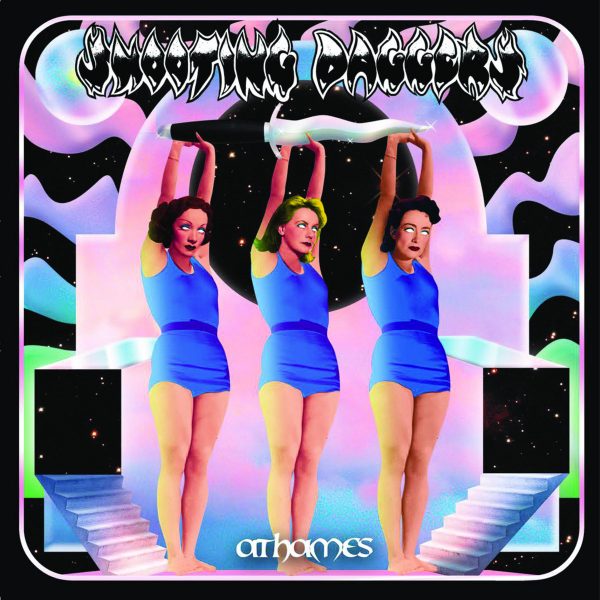