If it’s true that hard times spawn great music then Northern Ireland in the late ‘70s was the ideal incubator. A volatile mixture of sectarianism, attrition and state oppression, there was perhaps no more dangerous place to play music than in the Six Counties. While London based bands sang abstractly about bombs (the Clash’s ‘Career Opportunities’ and The Jam’s ‘’A’ Bomb in Wardour Street’) the groups spread across Shellshock Rock ran a daily gauntlet of suspect devices and checkpoints. The bombastic nature of punk was the vehicle used to report from inside the warzone and the incendiary material contained within Shellshock Rock should be handled with care.

Before the age of instant communication ideas transported a lot slower, so as punk spread throughout the nation, distinct variations cropped up and by the time it reached Northern Ireland the fashion posturing of the Pistols had been dropped in favour of something more direct. Case in point being The Undertones who open this disc with ‘True Confessions’. All flares and snorkel parkas they looked the very antithesis of punk yet this cut from their 1979 debut album is a succinct slice of fuzzed up garage pop and, with its lyrics that explore the very minutiae of modern life, it’s everything you’d want from a two minute punk song.

Of course punk levelled the playing field meaning that almost anyone could release a single and it’s the lesser known names, often appearing on CD for the first time, that are the revelation. With no major label in the province things were truly DIY as evidenced by Midnite Cruiser who’re represented by the two sides of their only single (‘Rich Bitch’ c/w ‘Striker’). Burning brightly but briefly their foray onto wax is a suitably adrenaline charged affair. Before rules were built to constrain punk a lot of bands were pulled into its slipstream by sharing a similar aesthetic (Dr. Feelgood, Eddie and the Hot Rods) and in Ulster that role was filled by XDreamysts (who toured with Thin Lizzy) and the Starjets (often described as The Bay City Rollers of punk!) both evidencing how genre divisions were initially blurred.

Those unfamiliar with the Northern Ireland punk scene will be astounded at the sheer amount of musical variety on offer from the furnace blast of the wonderfully titled The Idiots with ‘Parents’ to the pure pop sensibility of No Sweat and ‘Start All Over Again’ to Lenny & the Lawbreakers country and western cover of Kris Kristofferson’s Me & Bobby McGee’. There’s a lot of trial and error involved but what unites all the tracks is sheer youthful enthusiasm, something The Androids had in spades and they’re represented by two cuts: ‘Nine to Five’ and doff of the cap to the New York Dolls, ‘Lipstick Heroes’. Two raucous demo tracks from No Doubt round out the disc in the shape of ‘Contrast Disorder’ and ‘Look Away’.

Perhaps the purest musical distillation of the Troubles were Belfast band Stiff Little Fingers. Originally called Highway Star, their roots were firmly in classic rock but the fusing of incendiary lyrics to punk aggression was far too tempting to resist. Primed and ready to explode ‘Suspect Device’ was their first single (released on their own Rigid Digits label) and it seems that this is what punk was made for: a two and a half minute burst of cathartic fury that doesn’t take prisoners and when John Peel played it to death their legacy was secured. Also included is the ‘Gotta Getaway’ single which finds the band taking a more measured approach but the result is no less potent.

As with Disc One it’s the lesser known acts who’re the revelation and surely the greatest band you’ve never heard of are Protex. The two cuts presented here (‘Strange Things’ and ‘Strange Obsessions’) show why they scored a record deal with Polydor and toured the UK with The Boomtown Rats and Adam and the Ants. I’m picking up a definite post-punk vibe from Ruefrex who’s 1979 single ‘One By One’ still seems ahead of the times. This is early punk at its finest and, before the scene became shackled by rules, there’s a pleasant variation in styles from the angular new wave of The Faders (‘In It For The Kicks’) to the cool swagger of The Outcasts with ‘Magnum Force’.

Sharing a pop sensibility with The Undertones (with whom they shared gigs and the adoration of John Peel), The Moondogs should have been massive, but sometimes the fickle finger of fate can be cruel as the two tracks on this compilation (‘Ya Don’t Do Ya’ and ‘She’s Nineteen’) testify, both being high octane rockers that are liberally soaked in melody.  Reminding me of latter day The Damned the two cuts from Rod Vey are an interesting mixture of sax and early electronica. There’s also pop-punk from The Tearjerkers and also Aftermath before Male Caucasians tear things up with ‘For The Night’ before The Rattling Thorntons close the disc with the amphetamine R&B flavoured ‘The Whistle Song’.

Rudi, a perfect punk rock/power pop group, kick things off on the third disc. Featuring Gordon Blair, formerly Stiff Little Fingers and latterly The Outcasts (see Disc Two), they were courted by Pete Waterman(!) but opted for The Jam’s Jamming! label and their 1981 single ‘When I Was Dead’ (produced by Paul Weller) is a definite highlight. Ex-Producers offer some youthful reportage before we get some raucous punk from The Defects and both sides of their 1981 single (‘Dance (Until You Drop)’ c/w ‘Guilty Conscience’).

Of course, in such a volatile environment music was also a form of escapism, as evidenced by the Strike’s ‘Radio Songs’ and The Singles’ punchy ‘TV Detectives’.There’s plenty of tracks from the also-rans and barely-made-it-to vinyl crew in the shape of The Nerves, The Peasants (with their garage infused ‘Here She Comes’) and Acme. All three are solid bands who deserved a lot better and it’s testament to the quality and depth of the scene that they never rose to greater heights.

Belfast’s Big Self were a cornucopia of ides with ‘Surprise Surprise’ providing plenty of reggae inflections and moving in a post-punk direction with ‘Jagged Edges’. Imagine Roxy Music playing punk and you’d have something approaching Katmandu and their ‘Get My Act Together’. Control Zone originally appeared on the United Skins compilation with the Oi! flavoured ‘Bloody Bouncers’ and ‘Johnny Johnny’. Closing the disc and signposting the future are the Dogmatic Element with a sound that blends punk and goth they weren’t a million miles away from Bauhaus or Siouxie and the Banshees and the two tracks featured here show why they were the band to see on the live circuit.

A wonderful warts n’ all document of the times the 50-minute film Shellshock Rock had a difficult birth. Recorded on a wafer-thin budget the colours often bleed, sometimes overexposed, sometimes under, it’s a gritty, grainy look at the 1978/79 Ulster punk scene but its rough hue is also its charm: punk was never meant to be pretty and polished. Its submission to the Cork Film Festival was rejected (merely deemed unsuitable) but, as is the case with things that are banned, interest only increased and the film spread over the globe, picking up awards and accolades along the way.

From grotty rehearsal spaces to recording studios to the biggest stages Shellshock Rock captures the bands at all points between. The vitality, vitriol and urgency of Stiff Little Fingers is caught as they perform ‘Alternative Ulster’ from the New University of Ulster while both Protex and The Outcasts are immortalised whilst recording at Wizard Studios. As you’d expect things turn a bit rowdy when The Undertones perform ‘Teenage Kicks’ (and similarly when they close the disc with ‘Here Comes Summer’).

Interspersing the songs are interviews with the bands, record shop owners and rather bemused members of the public. There’s plenty that evidences the impressibility of youth and if ever proof was needed that music can break down barriers then it’s right here in Shellshock Rock. Essential viewing and listening. 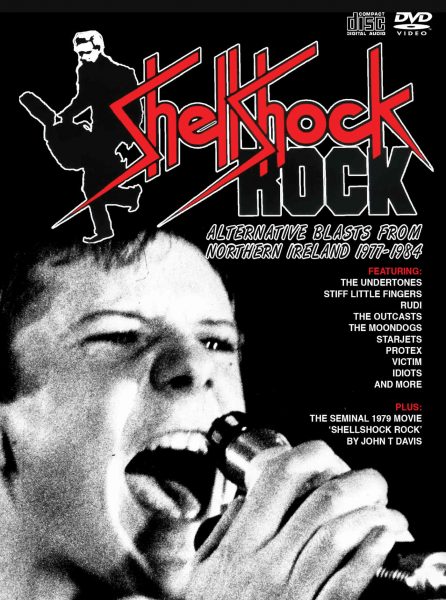