Hailing from Baltimore, Maryland, Sharptooth are a band currently making waves with their ferocious sound. After signing with Pure Noise Records in 2017 their debut album Clever Girl followed later that year while incessant touring found them further honing their skills. Unashamedly political Sharptooth are succinctly distilling hardcore through a female lens and have produced a 10-track album in Transitional Forms that seems tailor made for these turbulent times.

Immediately making their presence felt ‘Say Nothing (In The Absence Of Content)’ arrives with all fists flying and with a rage that can rival labelmates Knocked Loose. Sharptooth appear within a swirling maelstrom that’s heartedly laden with plenty of brutal breakdowns. It’s an aural assault of the highest order with Lauren Kashan’s barked vocals seemingly emanating from the very depths of hell. ‘Mean Brain’ follows as the punchy riff flits from speaker to speaker and recalls EYEWTKAS-era Glassjaw. With a defiant nihilism ‘Mean Brain’ goes straight for the jugular and continues to pummel for three brutal minutes.

An elongated, discordant introduction heralds the arrival of ‘Life On The Razor’s Edge’ and creates a soundscape that’s embedded with a certain darkness. There’s little in the way of respite as ‘Hirudinea’ comes out with both guitars blazing while the rhythm section combines to deliver a succession of blows to the solar plexus. Latest single ‘The Gray’ follows and there’s no indecision here as Sharptooth mix up rhythms with great abandon. In a moment of existentialism, the band step outside of the song to create a moment of calm that only serves to make the heavy sections which sandwich it even weightier and that’s just the type of decision that elevates Sharptooth above their peers.

With a righteous indignation ‘Evolution’ is a fine slab of hardcore fury as Matt Hague’s drums rumble like a buffalo stampede and the vocals, as if in perpetual loop, fire in double quick time. In a nice side step ‘153’ is delivered with a cleaner tone, and it’s good to hear a band mixing things up and trying something new as such risks are nearly always rewarded. ‘The Southern Strategy’ is a dizzying affair as guitarists Keith Higgins and Lance Donati weave concentric circles that are punctuated by Peter Bruno’s twangy bass. Trading speed for power ‘M.P.D.B. (Manic Pixie Dream Bitch)’ finds Sharptooth building a huge brutalist structure that towers over the listener with its monolithic brilliance.

‘Nevertheless (She Persisted)’ encases both speakers within walls of guitars for a suitably epic closer. Something of a tension of opposites, it’s a battering ram with a haunting motif along with clean vocals that juxtapose the guttural. Successfully avoiding the sophomore slump Transitional Forms is an album that should easily propel Sharptooth to the next level. 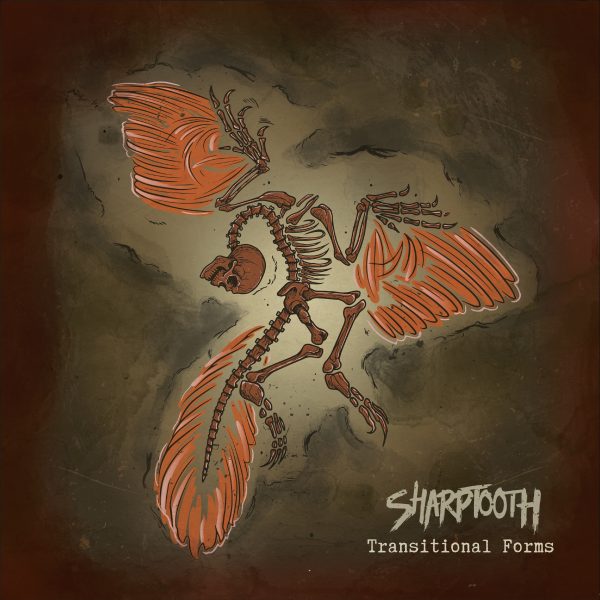