If you listen hard, you can hear the tough, wiry musical skeleton at the core of Shakra‘s music. Arguably the band’s style of melodic rock is a pretty narrow construct, but those twin guitar, bare boned riffs get carefully fleshed out in the studio. Sturdy – and often catchy – vocal melodies get added, creating living, pulsing melodic rock music with a pounding heartbeat. The titular 33 are a combination of 30 tracks sifted from 9 albums, and 3 new songs (more on them later).

The first disc is concerned with the more recent recordings, so play disc 2 first. That way you hear where and how they started, and grew into what they are now, though what they are now is a lot like what they were then – fourteen years later they still inhabit the same skin. Instantly recognisable. And because of that, over those years they’ve built a fanbase of true believers. 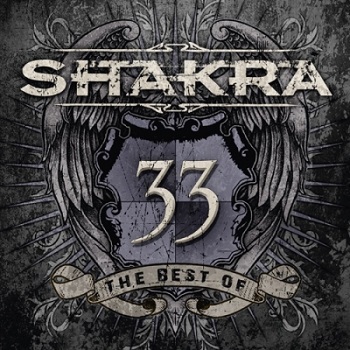 For anyone new to the band it’ll be clear that when the Shakra guys were young, they tuned into the same radio stations as fellow Switzerlanders, Gotthard, but probably listened to AC/DC on the fly, thus pointing themselves in a slightly different direction. It’s a grain they’ve never really cut against, but neither have they ever been slaves to convention. Thom Blunier’s and Thomas Muster’s guitars have been the divining rods, leading them to an oasis of memorable melodic hard rock music time after time, album after album, following their instincts, delivering immediate, honest and unpretentious melodic rock. You make the connection and they never let you down.

Judging by the newer material, the lean machine is now shunting out chunky, rippling riffs, flexing a more muscular, oiled up sound that suggests a bit of sonic broadening is going on. ‘Save You From Yourself’ and ‘Dream Of Mankind’, from 2013’s Powerplay, are splendid slices of pumping, motorised melodic rock that occasionally cast a contemporary rock shadow, pointing the way ahead.

Of the 3 new tracks, ‘The Beacon’, goes off tangentially into symphonic metal territory and that’s a real risk. Even at niche market level, brand names are invaluable, so you can’t afford to go too far off the page, yet for many it will be a welcome musical departure that is only let down by a banal lyric. The acoustic based ‘For The Rest Of My Days’ stays close to the original blueprint, updated by lyrical depth and maturity, in content and treatment, belying the subject matter’s familiarity. Probably the album’s standout track. The two picks from 2011’s Back On Track, ‘Stronger Than Ever’, a metallised melodic rock anthem, with both axes landing punch after punch on the body electric, and ‘Yesterday’s Gone’ a track with a bigger, fuller, jagged edged sound, seem comfortable in this company.

For many bands, the loss of two lead vocalists over the years would have holed the ship below the waterline. Amazingly, Shakra have faced up to this with equanimity, choosing carefully, turning the challenge into a fresh beginning. And if Best Ofs are never truly satisfying, it’s simply because track selection can only ever be subjective. Nine albums give you scope to explore light and shade, even if the contrast here is never stark. This collection also emphasises the consistently high calibre of the music. For non believers it’s an excellent place to start your conversion.