For the first time in over 20 years, 20 of the Sex Pistol’s recordings from 1976 to 1978 are collected together to tell the story of one of the world’s most influential and extraordinary bands. 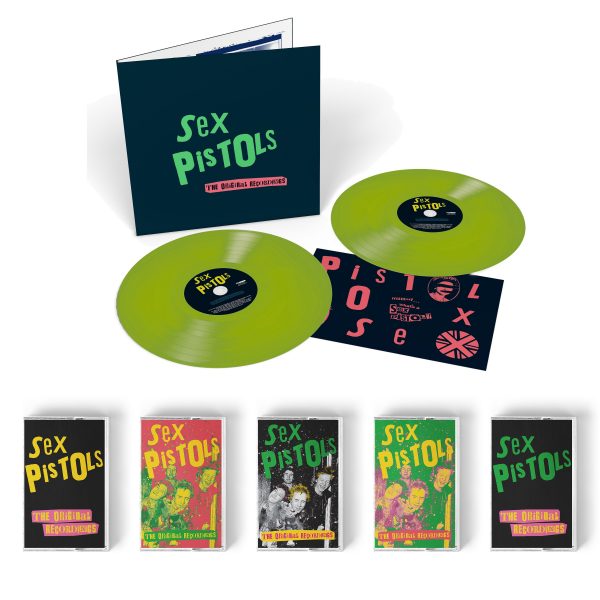 The Sex Pistols: The Original Recordings covers a historic period when the band were rarely out of the news or the charts.

The Sex Pistols left the British Establishment shaking when they exploded onto the music scene, kickstarting what later became known as punk –  a term the band were never comfortable with. Young people ripped up not just their musical forebears but their social ones too and Sex Pistols were the snarling, ferocious figurehead of the revolution.

They made one perfect, 40 minute album for the ages in 1977’s ‘Never Mind The Bollocks’ and from its artwork to the individual players, the attitude and music – every bit of it influenced the world we live in today.

The record is frequently listed as one of the most influential albums of all time with musicians from Joy Division / New Order to Kurt Cobain, Noel Gallagher, Green Day, to YUNGBLUD all citing them as key inspiration.  And this was not just musically, punk showed that anyone could create and many took the hint across fashion, art and design and more.

Their 1977 single “God Save the Queen” was banned by the BBC and reached Number 1 on the UK’s NME chart, but appeared at Number 2 on the Official UK Singles chart, leading to accusations that the song was purposely kept off the top spot. For the only time in chart history, the track was listed as a blank, to avoid offence to the establishment.

The collection soundtracks the period and features key singles ‘Anarchy In The UK’, ‘God Save The Queen’, ‘Pretty Vacant’ and ‘Holidays In The Sun’, essential tracks from Never Mind The Bollocks, further originals and covers from The Great Rock & Roll Swindle soundtrack album and some essential B- sides in ‘I Wanna Be Me’ (the flipside of ‘Anarchy…’), ‘Satellite’ (the b-side of  ‘Holidays In The Sun’) and ‘Did You No Wrong’ (from ‘God Save The Queen’).