Last here in 2018, Crowbar return to the shit-drenched shores of the UK in support of album number twelve, Zero and Below. Their first in six years, it’s another killer record from these sludge giants. Riff after devasting riff, Crowbar do heavy like no other, and this evening’s performance threatens to bring KK’s Steel Mill tumbling down. An already-packed Steel Mill is ready and waiting at the early set time of 7.10pm for the New Orleans mob to dish out the damage. Kirk Windstein expresses his gratitude more than once to the audience for coming out so early on a Friday night to see the band, but it’s the crowd that are more than grateful and Chants of ‘Crowbar! Crowbar! Crowbar!’ fill the room. With live performances put on hold by the pandemic, Crowbar’s crushing performance shows not just how much these sludge giants have missed the stage, but how much at home they are on it. If they want to come back, Wolverhampton is ready and waiting.

Thin Lizzy’s ‘The Boys are Back in Town’ plays over the PA, the lights go down, the cheers go up, Sacred Reich enter the stage, and smiles break out across the entire room. Politically charged and spiritually fuelled, album number five, 2019’s Awakening, held a mirror up to the world and reminded us that there is always the opportunity for change; we just have to take that opportunity. Three years later and it appears that that hand of opportunity is still hanging well within reach. But Phil Rind and co., as angry as you’d think they justifiably might be, are the happiest guys in the room tonight. It’s not often you get a lesson in the teachings of Ram Dass at a metal gig (or at any gig, I would imagine). The world may be divided, but when Sacred Reich bring their metal thrashing madness to the stage, everyone is united. And like the last time they were in this very room three years ago (reviewed here), Sacred Reich’s performance is again remarkable. Apparently, the band are working on their next album. Wolverhampton will be ready and waiting.

When Cavalera numero uno left Sepultura in late 1996, the remaining members of the band had to prove themselves to an audience largely unwilling to accept anything released under its name. Okay, so 1998’s Against and 2001’s Nation may not have received the reception the band hoped for – despite having a number of great tracks on them – 2003’s Roorback saw the band back on track. But it was with 2006’s Dante XXI (the last album with Cavalera numero two) that Sepultura hit their stride, and every album since then has been outstanding. Released in 2020, album number 15, Quadra, was begging for an audience, or, more specifically, a live audience. Forced to sit on the backburner by a global pandemic, the co-stars of which was a virus and a shit-ton of conspiracy theories, come 2022 and Sepultura are primed and ready to burn it up on every stage across the west.

November 2022 and Sepultura hit the stage in KK’s Steel Mill in Wolverhampton as if that prolonged and excruciating lockdown never happened, and with all the fire and ferocity you’d expect from a band that’s released their best work only a week before. Amongst the set highlights are a slam-heavy ‘Territory’, the beautiful acoustic intro to ‘Guardians of the Earth’, a brutal ‘Dead Embryonic Cells’, and the devastating duo that is ‘Refuse/Resist’ and ‘Arise’. The set an almost even split between the modern and the ‘classic’ Sepultura, the material from Kairos, Machine Messiah and Quadra, blends well with that from Arise, Chaos A.D., proving that this line-up is as strong as the band ever were. 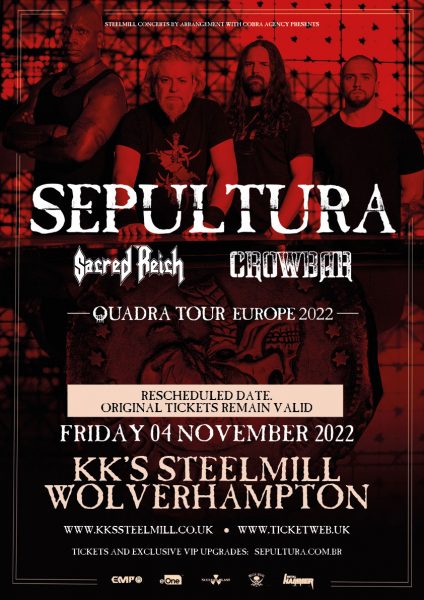