An excellent album from a highly evolved band…

Released through Nuclear Blast on 13 January 2017

Since Max Cavalera’s departure, Sepultura have had to work very hard to prove themselves to fans and critics alike. With the band having to start afresh under their own well-established moniker, despite having some very good material on it, 1998’s Against was met by a fan-base unwilling to see their band fronted by someone – anyone – else and producing music that was different to what they thought they should be getting. Both 2001’s Nation and 2003’s Roorback are very good albums too, not great, but again there are some great tracks there. Though the band were developing very well and pushing into new musical territories, it was with 2006’s Dante XXI that the band found that creative spark and harnessed the power that its flames yielded. Having gone through ten years of hell at the hands of fans and critics alike, it’s fitting that Dante’s The Divine Comedy would provide inspiration of the album’s concept.

And then what happens? Igor Cavalera leaves and Sepultura find themselves with no original members and open to even more of the perennial criticism that this isn’t the real Sepultura. (Far fewer people seem to be criticising Napalm Death or Opeth in this manner though Opeth seem to be facing an interesting twist on this criticism for their musical direction). And those that say that what post-Max Sepultura has produced isn’t any good, they need to refer to Dante XXI, 2009’s A-Lex, 2011’s Kairos (these two featuring the outstanding drum work of Jean Dolabella) and 2013’s The Mediator Between Head And Hands Must Be The Heart where they proved beyond even the vaguest shadow of doubt that they are more than worthy of any and all acclaim. And now, with the band’s 14th album (9th without Max, 5th without Igor), they’ve done it again.

As Kisser explains, “the main inspiration around ‘Machine Messiah’ is the robotisation of our society nowadays. The concept of a God Machine who created humanity and now it seems that this cycle is closing itself, returning to the starting point. We came from machines and we are going back to where we came from. The messiah, when he returns, will be a robot, or a humanoid, our bio-mechanical saviour.” Such an involved concept demands equally involved music, yes? ‘Machine Messiah’ opens proceedings with Kisser laying down broad chords and subtle atmospheric phrases over Casagrande’s controlled drumming. As the track builds over its ponderous 6 minute duration, Green’s vocals slowly transform from long sung syllables into a raging snarl as we “bow down to Machine Messiah”. Though it’s far from what such an elaborate concept would suggest, it’s sombre tone and mounting rage sets the tone for the rest of the album.

‘I Am The Enemy’ goes for the throat in a blast of straightforward thrash, Kisser shredding and dive-bombing and mangling the whammy bar like a loon for a suitable maniacal lead break. They could easily fill the album with 10 more of these thrash delights and this would be a great album. But no, ‘Phantom Self’ opens with a maracatu, an ancient carnival rhythm from north east Brazil, and a Tunisian violin melody. The first of many experimental elements on the album, thrash and death metal soon stomp in and the violin plays off the riffs and Kisser plays off the violin and Sepultura bring the brutality in a beautifully melodic, catchy and infectious track.

‘Alethea’ (Greek for ‘truth’) rumbles in with Casagrande’s trippy, off-time tribal drum loop and darkly menacing chords before the tracks jarring rhythms, fluctuating but fluid feels and wrenching riffs tug and tear at each other. Reminiscent of the instrumentals found on 80s’ thrash albums, with an array of fierce and fiery thrash riffs that would make for an incredible track by themselves, the Brazilian rhythms and the extraordinary acoustic guitar work of Kisser as well as an organ solo(!) make instrumental ‘Iceberg Dances’ an absolute masterpiece. Half way through the album and so far, so very fucking good.

With ‘Sworn Oath’, the album dips a little, not much, just a little. An epically-structured piece, the track plots an interesting journey but there are times when it feels the strain. The use of keys is a good touch and Green’s performance is particularly menacing but it misses the mark somewhat and would have benefitted by being trimmed down by a minute or so. Fortunately, the darkly brooding ‘Resistant Parasites’ shifts the album back into gear with the trademark Sepultura groove augmented by the violent stabs halfway through, the atmospheric guitar lines and Kisser’s remarkable lead work. Intensifying as it moves towards an uplifting crescendo, the track slams into a crushing thirty-second coda with Green’s barbarous bellow at full blast.

Returning to all-out thrash for the first 90-seconds, when ‘Silent Violence’ shifts into more technical (but no less hard-hitting) territory, with the harmonies in the guitar lines and the tumbling drums driving the pummelling riffs, the track becomes an even more compelling beast. ‘Vandals Nest’ is an intense burst of thrash and perfectly placed to maintain the album’s urgent momentum and indulged intricacy. All that remains is for ‘Cyber God’ to cast its gaze over the previous nine tracks and summon and combine all of their force into one epic and extraordinary closing statement. With the track’s fade out positioning the listener at that point where they must ponder their place in a world dominated by technology and enslaved to the alienation and ignorance that it breeds, it’s a marvellous open ending to a marvellous album.

Kisser’s riffs, his leads, his melodies, his harmonies and his acoustic work are all exceptional. Paulo Jr’s presence is more than felt in the riffs and the rhythms, this time because, according to Kisser, he “worked on his bass arrangements at home by himself, which he’s never done before!” Casagrande’s drum-work is as innovative and creative as it is powerful. And Green has again proved himself an accomplished vocalist with both the force and the range to match the prowess of his co-conspirators. Kudos must also go to producer Jens Bogren who, if you watch the studio diaries on Nuclear Blast’s YouTube channel, has worked tirelessly to get the best out of each member and the band as a whole.

What Sepultura is now – and has been becoming for the last 20 years – is a highly evolved band that, dare I say, had Max been at the helm, would never have seen the light of day. The band’s performance – collectively and individually – is second to none and what they have achieved with Machine Messiah is remarkable. An album that sets a very high standard so very early in the year, I wouldn’t be surprised if this is on many of the ‘Best of 2017’ lists at year’s end. 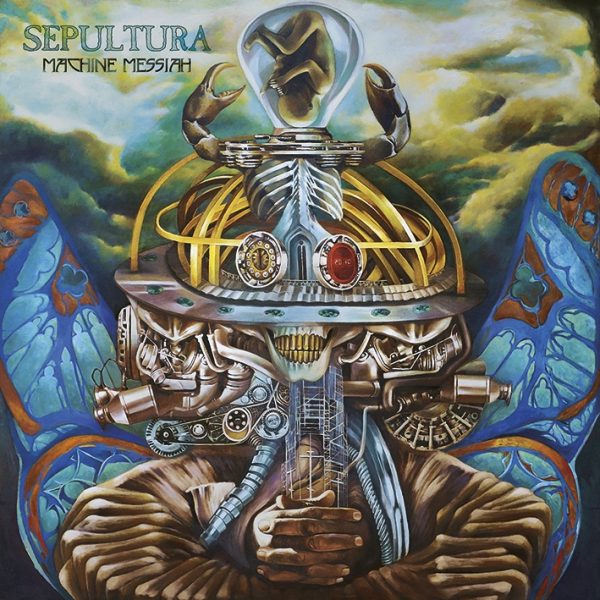